Spc. Nick Young, 23, of Venice, Fla., walks across a rickety bridge in Wardak province while a fellow soldier splashes through the river during a recent foot patrol near Kane Izat. (Heath Druzin / S&S)

Spc. Nick Young, 23, of Venice, Fla., walks across a rickety bridge in Wardak province while a fellow soldier splashes through the river during a recent foot patrol near Kane Izat. (Heath Druzin / S&S) In the late winter slop of Wardak province, soldiers trudge through boot-sucking mud on their patrols. The threat of roadside bombs and an opportunity to interact more with local Afghans has convinced soldiers in the province to reduce their driving to a minimum. (Heath Druzin / S&S) 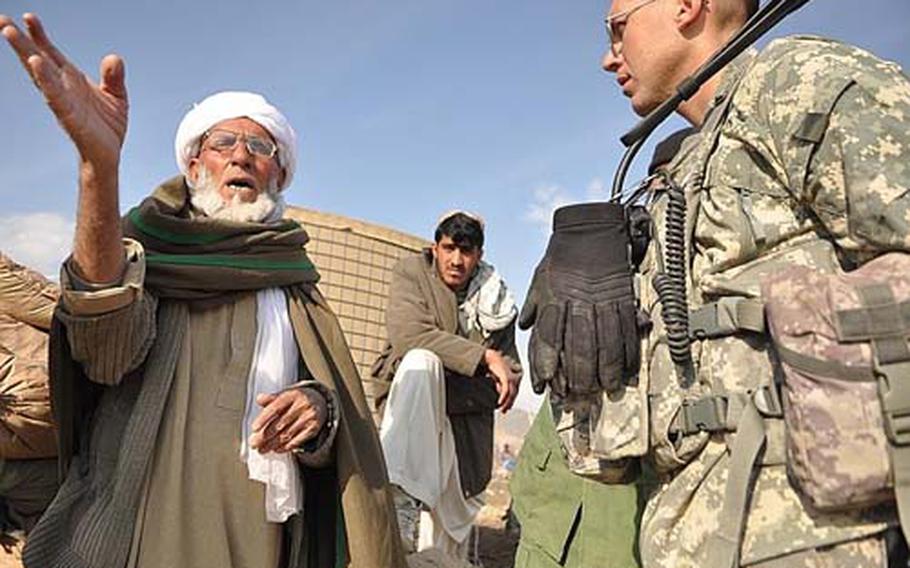 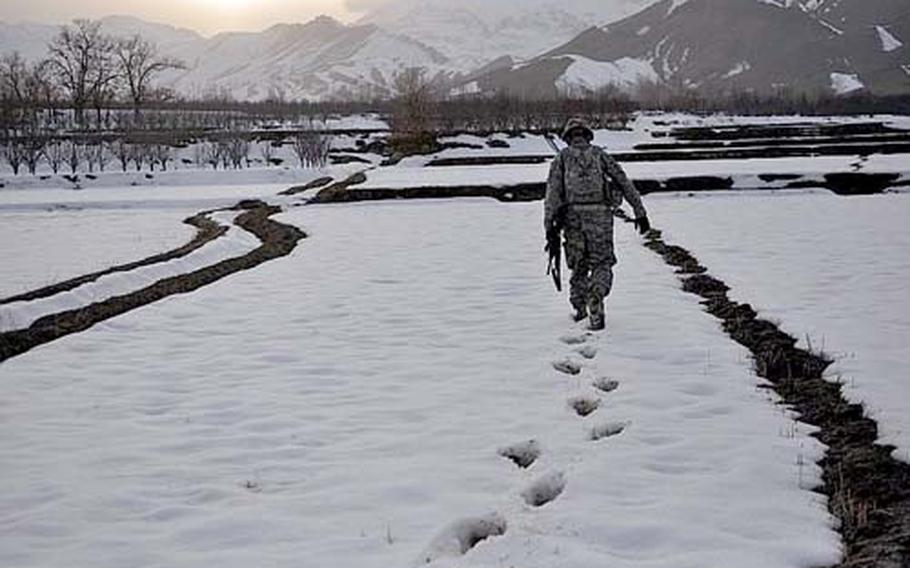 Capt. Kirby Jones slogs through the snow during a mission in the town of Khanjankhel in Wardak province. Jones, 31, of Bellingham, Wash., has almost completely abandoned using vehicles for his company&#39;s patrols, opting to walk, often across farm field, to minimize the threat of roadside bombs. (Heath Druzin / S&S)

KANE IZAT, Afghanistan &#8212; The airborne soldiers of Company B walk. Then they walk some more. Through snow and mud, across apple orchards and frigid rivers, in the shadow of menacing, snow-capped peaks, when the soldiers need to get somewhere, the road is almost never an option.

Roadside bombs have been the biggest killer in Afghanistan for coalition troops, and as armor has improved, the bombs have gotten bigger and more sophisticated.

Capt. Kirby Jones, the commander of the 1st Battalion, 503rd Infantry Regiment&#8217;s Company B, sees a simple solution to this: Never drive. Anywhere.

Jones, 31, of Bellingham, Wash., and his company of soldiers, under the 173rd Airborne Brigade Combat Team, are based at Combat Outpost Nerkh, perched more than 7,000 feet up in the shadow of 11,000-foot peaks in northern Wardak province. Soldiers across Wardak, much of it with similar terrain, have also largely eschewed vehicles.

It means a boot-sucking slog with cold, wet feet, filthy uniforms, and a chill that penetrates every layer of clothing. It also means a much longer commute. What would be a 15-minute drive can become a two-hour walk, and for more remote missions, soldiers in Wardak often rely on helicopters, which are subject to the whims of the weather.

Walking through the village of Kane Izat near Combat Outpost Nerkh, Jones&#8217; soldiers are mobbed by children asking for pens and stop to chat with residents. After stopping at an outpost of a local U.S.-backed militia, where fighters complain they are not getting their full pay, the soldiers stop for tea with the principal of a nearby school.

Insurgents have been paying attention and there are signs they are adapting. In the Tangi Valley in the south of the province, one soldier was injured by a booby trap laid for his foot patrol, and soldiers in the area have found several similar explosives in the area before they detonated.

In three months, though, in an area notorious for roadside bombs, Jones&#8217; men haven&#8217;t suffered a single casualty.

It&#8217;s still early, and with the melting snow traditionally comes more fighting, but Jones says he is more comfortable handling a firefight than playing Russian roulette with cleverly concealed bombs.

Even in the midst of a steady, chilly rain on a recent patrol through fields of mud and snow, the infantry soldiers weren&#8217;t complaining.

What is perhaps more surprising than Company B&#8217;s almost complete abandonment of vehicles is the fact that more units haven&#8217;t followed suit. In 2009, 275 coalition troops were killed by roadside bombs, more than 60 percent of total casualties, with that percentage holding steady this year. Sixty troops already have been killed by the bombs, according to icasualties.org.

In Afghanistan&#8217;s bomb-plagued south, troops regularly commute to patrols in everything from heavily armored Mine-Resistant Ambush-Protected vehicles to the lightly armored eight-wheeled Strykers, a vehicle that has proven nimble in urban combat but has a miserable record of protecting soldiers against buried explosives.

For Lt. Col. Matt McFarlane, who commands forces in Wardak province, pushing his men off the roads was an easy call, in line with directives from Gen. Stanley McChrystal to have a less intimidating presence and act more as guests than occupiers. Lumbering through a town in hulking armored vehicles sends a very different message from walking up with a handshake, said McFarlane, 40, of Burke, Va.