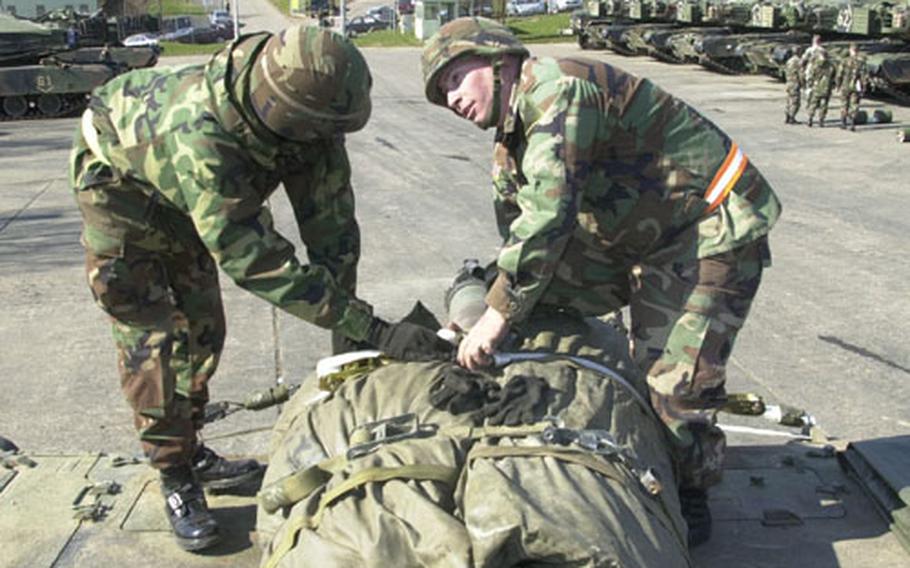 Staff Sgt. Kirk Pryka, right, a Bradley tank commander, confers with his loader, Pfc. Mark Carter. The soldiers are with the 1st Battalion, 35th Armor Regiment of the 1st Armored Division, which is deploying to the war in Iraq. (Terry Boyd)

BAUMHOLDER, Germany &#8212; Tanks, Humvees and miscellaneous support vehicles lined up Tuesday at the 1st Battalion, 35th Armor Regiment motor pool, waiting to be sent to the railhead &#8212; or to repair areas for last-minute fixes.

The same day, a B-1B bomber might have killed Saddam Hussein and his sons as they met with Iraqi military officials. By Wednesday, fighting in Baghdad had been replaced by celebration, looting and statue toppling.

Still, 1st AD soldiers say there&#8217;s only one mission on their minds.

A hundred yards away, Capt. John Bowen, a 1-35 company commander, savored the moment as he watched some of the 14 Abrams he commands negotiate the pre-shipping inspection process.

The division&#8217;s mission may be changing in the fluid war against Iraq.

Last week, The Washington Post quoted an unnamed senior defense official who said that changes in U.S. European Command&#8217;s final war plan &#8212; after Turkey&#8217;s decision not to let U.S. ground forces attack across its border with Iraq &#8212; slowed down deployment of heavy divisions.

The in-between time is the hardest part.

In a speech last week, Maj. Gen. Ricardo Sanchez, 1st AD commander, told troops in Baumholder that they are going to war, and to count on being gone a year.

Now, at 1st AD bases all over Germany, soldiers are scrambling nearly around the clock to work through one of the world&#8217;s largest logistical challenges: deploying a heavy armored division.

To some extent, the voyage has become more important than the destination.

At Baumholder, soldiers ran through the regiment motor pools screaming, &#8220;Hurry up&#8221; and &#8220;Hey, where&#8217;d my tank go?&#8221; Other soldiers practiced the hand-to-hand combat training they got earlier in the day, rehearsing the opening moves of getting a grip on the enemy.

At Wiesbaden, a half-mile of equipment ran up and down the airport road on Thursday.

&#8220;I&#8217;ve never seen anything like this!&#8221; said Sgt. Scott Gallup, tasked from the 501st Military Intelligence Battalion to help inspect and clean 27 flatbed trucks loaded with everything from M-88 recovery vehicles to Humvees.

No matter how busy, soldiers&#8217; minds were still on the uncertainty of what they&#8217;re getting into. Depending whom you talked to, attitudes ranged from anxious to gung-ho.

Some took little comfort in the waning combat in Iraq.

At Baumholder, tankers were more sanguine.

Many commanders and platoon sergeants had deployed to either Desert Storm, or to peacekeeping missions, and they all know the routine. Pryka and his three-man Abrams crew are squared away, he said.

West grew up the son of a soldier at Leesville, La., next to Fort Polk.

Others were looking forward to their first big test. With his electrical engineering degree, 1-35 company commander Bowen could be safe in a corporate cubicle, slogging through another project for the firm.