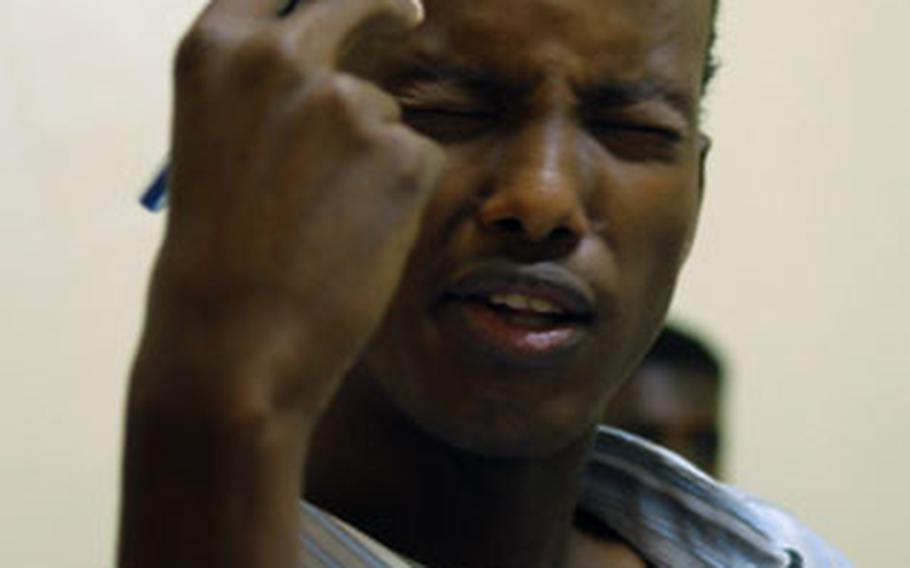 A student at an English discussion group in Djibouti City, Djibouti, struggles to find a word during a recent discussion. U.S. servicemembers and other personnel from Camp Lemonier attend classes to give students a chance to hone their language skills with native speakers. (Zeke Minaya / S&S)

A student at an English discussion group in Djibouti City, Djibouti, struggles to find a word during a recent discussion. U.S. servicemembers and other personnel from Camp Lemonier attend classes to give students a chance to hone their language skills with native speakers. (Zeke Minaya / S&S) 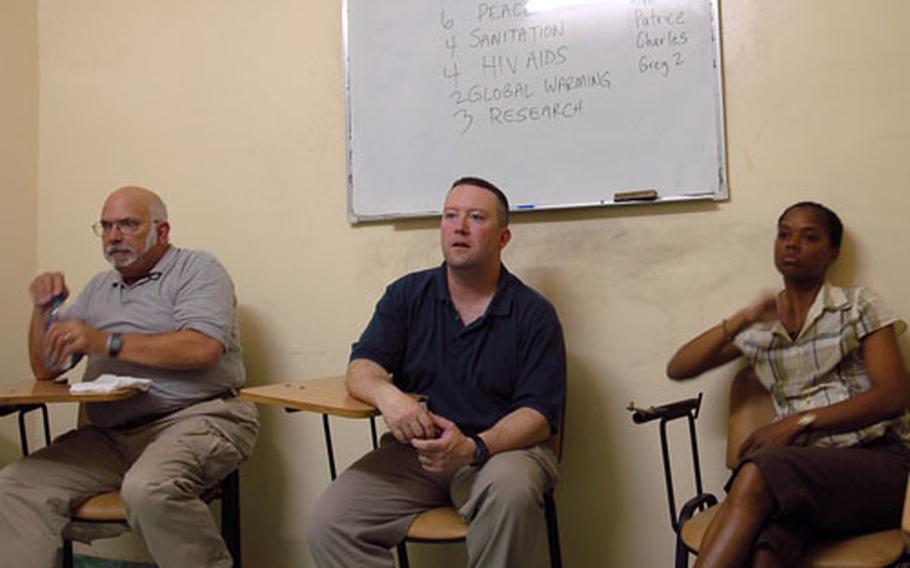 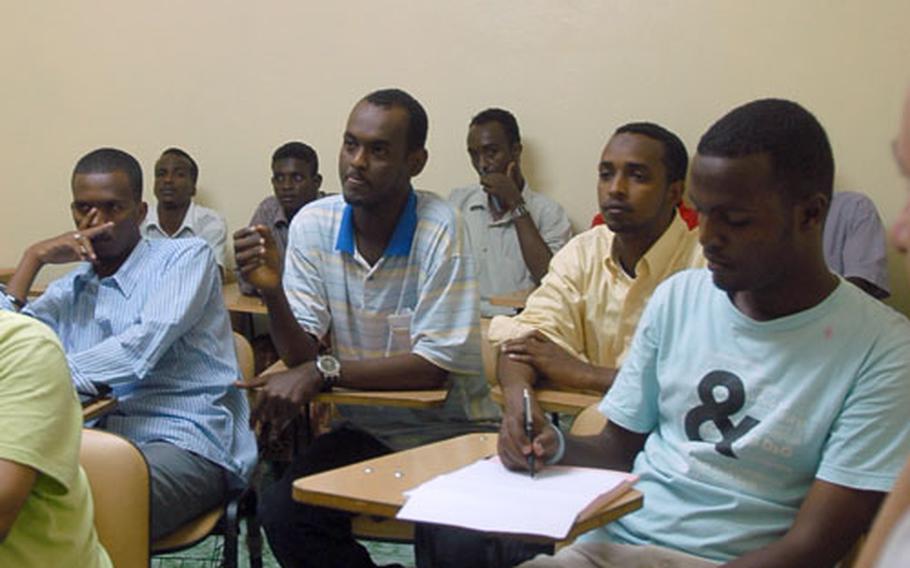 Roughly 500 students attend the discussion groups during the week, where they have a chance to hone their language skills with native English speakers. (Zeke Minaya / S&S)

DJIBOUTI CITY, Djibouti &#8211; It was night outside, but the students in the classroom were nonetheless energetic. As their teacher asked questions, hands shot into the air. The topic this evening was the concept of peace.

&#8220;We cannot live without peace,&#8221; said one student, speaking in halting English. &#8220;Without peace there is no life.&#8221; Sitting in front of the class, Alan Moses, education counselor at the U.S. military base Camp Lemonier, responded to the student&#8217;s comment. &#8220;We can discuss anything here and not fight. That is peace, my friends,&#8221; he said, speaking slowly so the students could follow.

The class was one of several attended during the week by American military members helping local students work on their English. But U.S. servicemembers are more than just tutors. Their presence in the classrooms of Djibouti opens up a cultural exchange, allowing both teachers and students to learn from each other.

School administrator Hassan Khalif said the Americans have helped hone language skills but also given students a chance to learn more about the United States.

U.S. Air Force Maj. Lanny Greenbaum, a 36-year-old native of Ohio, is one of several volunteers at the English discussion groups. He said the benefits of the interaction extend far outside the classroom.

The discussion groups are held Sunday through Thursday at six different schools throughout Djibouti&#8217;s capital city. The roughly 500 students who attend the forums range in age from preteens to college students in their 20s. Once in class, students vote on what topics they wish to discuss.

Greenbaum said that topics have covered subjects as varied as relationships, HIV/AIDs and global warming.

The discussions, on a continent that is no stranger to strong-arm leaders and totalitarian regimes, also help to let students know that the U.S. military mission in Africa is one of humanitarian assistance.

The Combined Joint Task Force&#8212;Horn of Africa is charged with strengthening the relationship between the region and the United States through humanitarian assistance. The goal is to stop anti-American extremism from taking root in eastern Africa.

Khalif said that though French, Arabic and Somali are the main languages of Djibouti, he can foresee a time when English is also widespread. English is the language of commerce, and for Djiboutians looking to advance to more lucrative jobs, it is a must, he said.