Soldiers help Korean children with their English at school 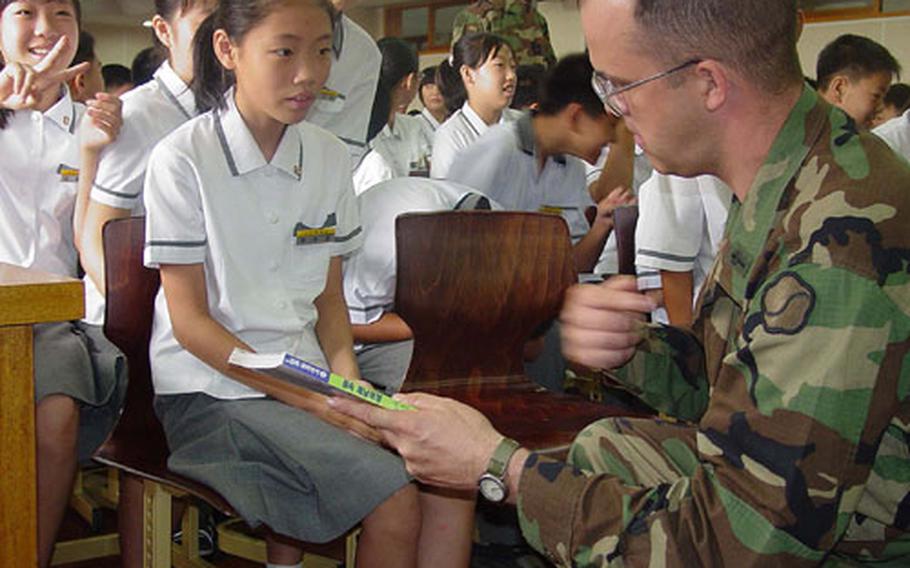 So, he said, his Seok Jeon Middle School staff and parents are pleased the U.S. Army&#8217;s 23rd Chemical Battalion has forged an &#8220;adopt-a-school&#8221; partnership with them. The Camp Carroll battalion is sending soldiers to the Waegwan school to teach English, plus some American history and culture.

&#8220;Only a school located in a big city or a luxurious private middle school will have a native-language English teacher,&#8221; Lee said. &#8220;We are a very small school, and now we have good native English teachers. The parents are very interested in this program.&#8221;

&#8220;Some soldiers don&#8217;t have many casual opportunities to interact with Koreans,&#8221; Bieganek said. &#8220;This gives everyone an opportunity to meet, talk and mingle. It encourages interaction and highlights common interests. It makes the two groups more real to one another.&#8221;

The program also can help the students better understand the U.S.-South Korean military alliance and its origins in the 1950-1953 Korean War, said South Korean Army Capt. Park Ki-chul, liaison officer to the 23rd Chemical Battalion. &#8220;The program is also designed to show U.S. culture and history,&#8221; he said.

Maj. Sergio Dickerson, battalion executive officer, said, &#8220;Feedback from the children has been very positive. This is a new school so it is an opportunity for us to start on the ground floor, so to speak. It is important to make a good impression at an early age.&#8221;