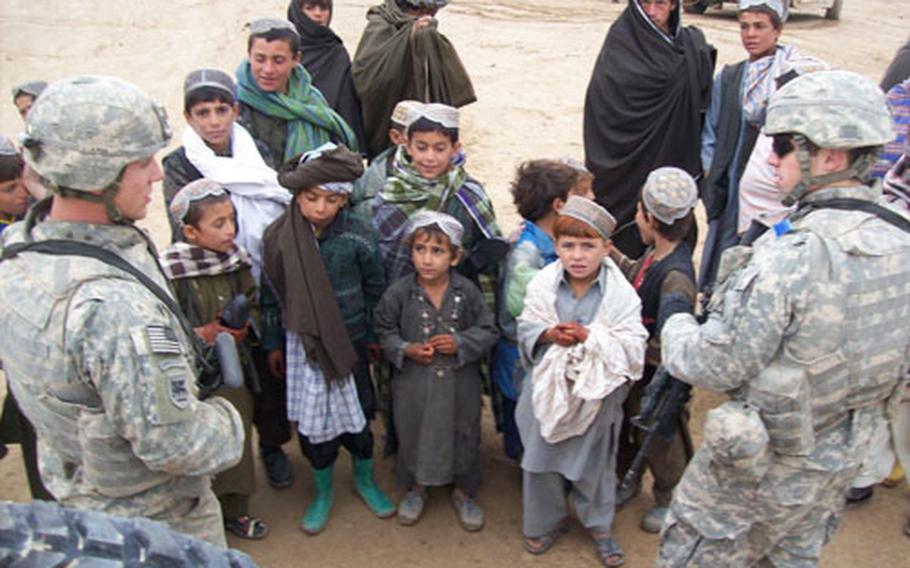 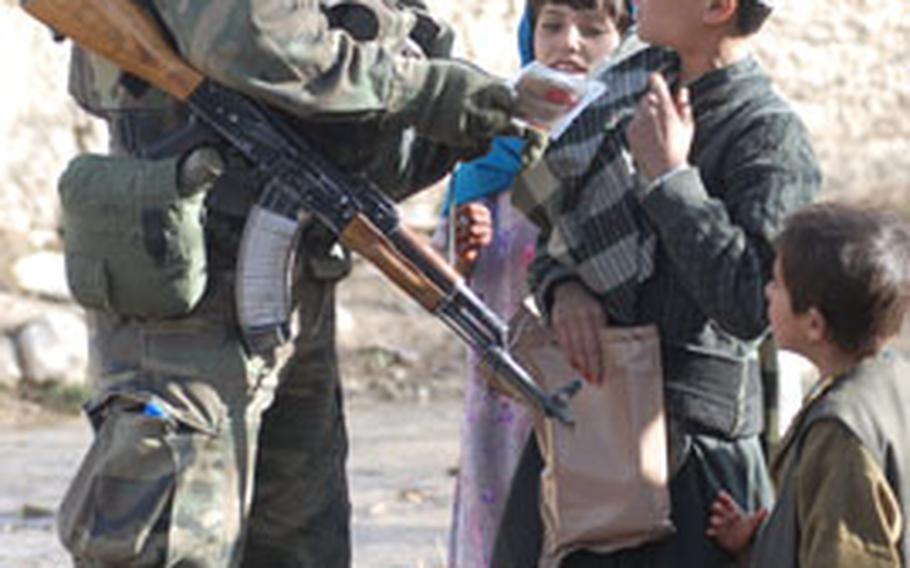 An Afghan soldier introduces some kids to the wonders of U.S. Meals, Ready to Eat in Mizan District, Afghanistan on Dec. 20. (Seth Robson / S&S) 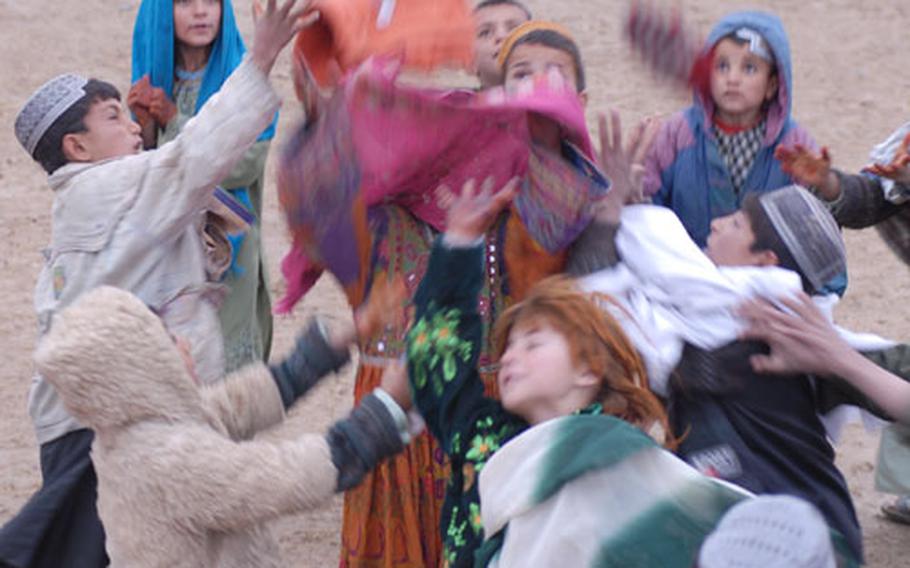 Children leapt for treats recently when soldiers with the 1st Platoon, Company A, 1st Battalion, 4th Infantry Regiment handed them out in the Mizan district of southern Afghanistan. (Seth Robson / S&S) 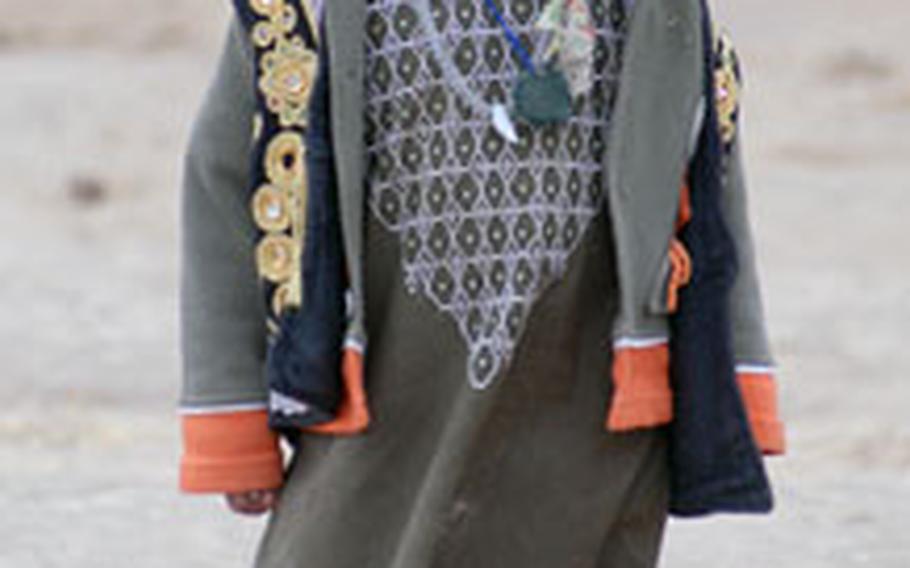 A youngster wisely stands to one side while older kids vie for treats dispensed recently by U.S. troops in the Mizan district of southern Afghanistan. (Seth Robson / S&S) 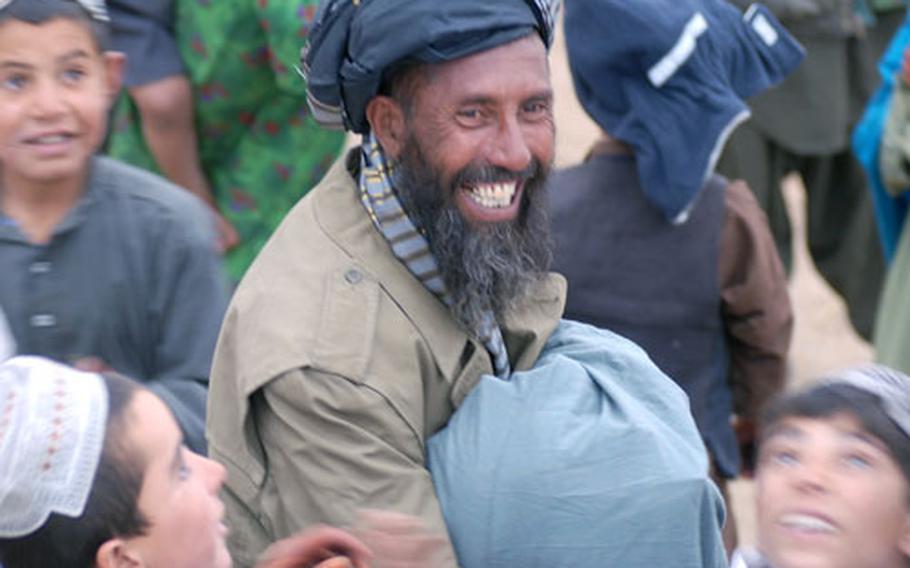 ZABUL PROVINCE, Afghanistan &#8212; The Taliban is using bombs and threats to villagers in an effort to make U.S. bases in Zabul province &#8220;irrelevant,&#8221; say U.S. soldiers fighting the insurgents in some of the country&#8217;s most remote areas.

Platoon leaders of Company A, 1st Battalion, 4th Infantry Regiment say they are holding onto Zabul&#8217;s districts but could use more people at their forward operating bases.

The few troops at Forward Operating Base Mizan in Zabul&#8217;s Mizan district spend their time promoting their Afghan counterparts and working to win the people&#8217;s support by handing out aid and conducting &#8220;information campaigns.&#8221;

The Taliban&#8217;s tactics include placing bombs on the road leading to the district center and telling people not to drive on it, according to 1st Lt. Joshua Sims, 25, of Talladega, Ala., who leads the platoon. The Mizan district center is a ghost town these days. A school built with Japanese aid that used to teach 120 students is closed, as are a medical center and veterinary clinic.

Sims hopes to reopen the school and veterinary clinic by spring, but the only facilities operating there recently were the district chief&#8217;s office, the police station and FOB Mizan, which is also home to a platoon of Afghan National Army soldiers.

The once-bustling main street is lined with shuttered businesses. There used to be 30 shops in the market but now only 10 are in use with four or five open on a good day, Sims said.

Soldiers at another 1-4 base, FOB Lane in nearby Arghandab district, also in Zabul province, reported the Taliban using the same tactics to divert traffic away from their base.

The rebels in Mizan district have created their own unofficial local government, complete with a shadow district chief, courts and a thriving marketplace with dozens of shops.

U.S. forces choose not to destroy the Taliban&#8217;s market because that would deprive local people of a place to shop, Sims said.

The 1st Platoon soldiers have few chances to make contact with enemy fighters, who move across the mountainous landscape on motorcycles that can easily outrun the Americans&#8217; heavy armored vehicles.

The Americans do hurt the Taliban when they clash. In November, Company A mounted an operation in Mizan that killed as many as 20 enemy fighters, according to Task Force Zabul deputy commander Maj. Sean Fisher, 37, of Deerfield Beach, Fla.

Attacks on U.S. or Afghan government forces typically start with a bomb blast followed by fire from high ground and a hasty escape, Sims said.

Capt. Jason Cowden, 28, of Cincinnati, one of two embedded tactical trainers working with the Afghan army in Mizan, said the U.S. and Afghan armies are undermanned in the district.

&#8220;The enemy is here and we don&#8217;t have enough security forces to quell the threat &#8230; but it seems like the strategy is not to push a lot of security forces to these outer FOBs. We are just holding this territory here and it is hard to make real gains,&#8221; he said. About 200 Taliban rebels are estimated to be operating in the area.

The rebels use the Mizan district as a transit route to move across Afghanistan, Fisher said.

On a recent patrol a Taliban observer could be seen, through binoculars, reporting on the 1-4 soldiers&#8217; movements. He was standing on a hilltop just out of mortar range. Just the same, Sims called for a warning shot.

Tips from locals on Taliban activity are few and far between although people occasionally give information to the Afghan National Police or district chief, he said. So U.S. and Afghan government forces run information campaigns in the hundreds of small villages in the district &#8212; battling for people&#8217;s hearts and minds.

However, Cowden said it is hard for the ANA to take the lead when they are not equipped properly. By late December, the ANA soldiers in Mizan had yet to receive winter clothing, and they patrolled in unarmored Ford Rangers, making them vulnerable to bombs.

&#8220;If they hit an IED (improvised explosive device) they are going to be at least wounded, so if we want them to take the lead in operations we need to give them the same vehicles that we have or they will see that American lives are more valuable than theirs,&#8221; he said.

So far the Americans, the ANA and the ANP have each lost a vehicle to blasts. A policeman was recently killed by a roadside bomb and three U.S. soldiers went home with serious wounds from a blast, Sims said.

A big part of the information campaign involves giving Afghans clothes and food.

Soldiers were mobbed by dozens of children and a few adult males when they showed up recently at a village about half hour&#8217;s drive across twisting dirt tracks from FOB Mizan. Women peered from behind buildings as the soldiers passed out gifts to delighted youngsters.

But as the soldiers left the village, the Taliban watched. They do not normally behave violently to villagers, Sims said.

Defense Secretary Robert Gates recently acknowledged that coalition forces are facing a shortfall of about 7,500 troops in Afghanistan, but he gave no indication of when the U.S. military or NATO countries would send more troops to the country.