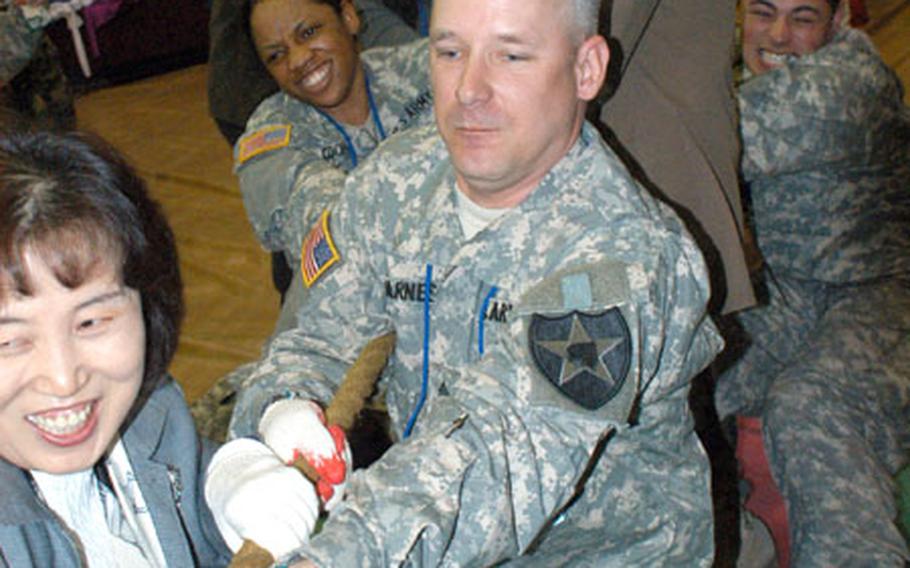 Soldiers from the 2nd Infantry Division celebrate their new “sisterhood” with the Gyeonggi community following a signing ceremony at the Camp Red Cloud Gym on Wednesday. (Courtesy of 2nd ID Public Affairs)

Contrary to the gender reference in the name, said 2nd ID spokeswoman Master Sgt. Kanessa Trent, the Sisterhood program is open to both men and women and is aimed at fostering friendship between soldiers and the local community.

The program pairs individual soldiers with local community members for events, which Trent said will help soldiers learn more about South Korea and its people. The program is open to all Area I and 2nd ID soldiers.

&#8220;This is a new model of cultural exchange efforts between Koreans and U.S. servicemembers,&#8221; said Gyeonggi Province spokesman Kim Sang-su.

The event began with performances by the 2nd ID Tae Kwon Do Team and the Yangju Mask Dance Team.

&#8220;This signifies more than an extension of our friendship; it&#8217;s a promise for future cooperation on cultural events and joint progress,&#8221; said 2nd ID commander, Maj. Gen. James A. Coggin.

Afterward attendees had the opportunity to play traditional Korean games.

Trent said the program was the result of a slightly different sisterhood event in September, which matched female members of 2nd ID with their female South Korean army counterparts.

&#8220;It went so well it was decided that this should be a formal program, and not just limited to female soldiers,&#8221; Trent said.