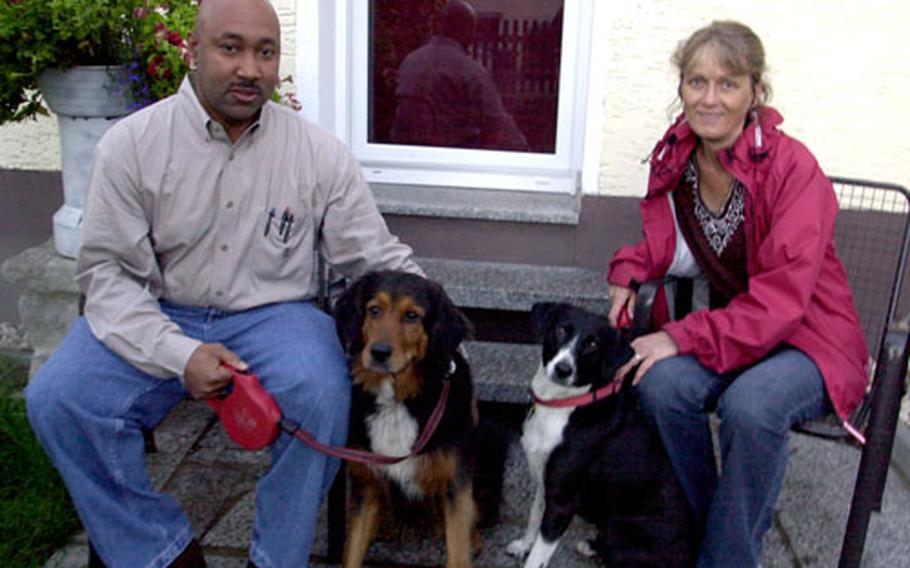 Department of Army civilian range control worker Neville Gallimore and his wife, Brigitta, said Monday that they have had no luck finding a house near Grafenwöhr, Germany, since moving there from Fort Hood, Texas, on Aug. 8. Their dogs — Jolie and Dixie — are not making house hunting easy, they say. (Seth Robson / S&S)

GRAFENW&#214;HR, Germany &#8212; Demand for housing from incoming soldiers and civilians has forced Army officials to expand their search area.

Last month, the garrison&#8217;s housing office ditched a plan to house new arrivals within a 30-minute drive of post and is now offering troops homes as far as 45 minutes away, said Dwane Watsek, Grafenw&#246;hr director of public works.

The arrival of thousands of troops and families from the 2nd Cavalry (Stryker) Regiment has put increased pressure on local housing, he said.

Despite the change, which Watsek said is temporary and meets the U.S. Army Europe standard, soldiers coming here can expect good housing on post or close to base, he said.

&#8220;If you are a soldier coming to Graf you will be offered state-of-the-art housing with U.S. appliances, 110-watt voltage and a single-car garage in less than the average USAREUR wait time (13 days),&#8221; he said.

But for civilians the housing situation is more complex, Watsek said.

Neville Gallimore, a Department of Army civilian range control worker, and his wife, Brigitta, said Monday that they&#8217;ve had no luck finding a house near Grafenw&#246;hr since moving there from Fort Hood, Texas, in August.

&#8220;When we first got here, the housing office showed us some things that were very substandard. There would be oil smell all through the house or in the basement there would be mold. It has been pretty much all junk,&#8221; he said.

The housing office even offered them a &#8220;castle&#8221; that the couple said had no kitchen and was so large it would have cost massive amounts to heat.

A problem for the couple, who are a renting a one-bedroom flat near Grafenw&#246;hr, is that they have two dogs, Jolie and Dixie, Brigitta Gallimore said. Some landlords do not allow dogs and others require the couple to fence their yard at their own expense, she said.

An advertisement in the local newspaper seeking housing got only one reply, from a German real estate agent who wanted 1,800 euros a month in rent for a house in Vilseck, she said.

The couple also is working with German real estate agents, who typically charge two-months&#8217; rent as a finder&#8217;s fee.

One of the agents, Jurgen Burger, said he moved to the Grafenw&#246;hr/Vilseck area six months ago after 20-years of house- hunting for Americans in the W&#252;rzburg area.

Most of Burger&#8217;s clients are civilians, such as engineers and teachers, but he&#8217;s also found houses for officers who want to live off post, he said.