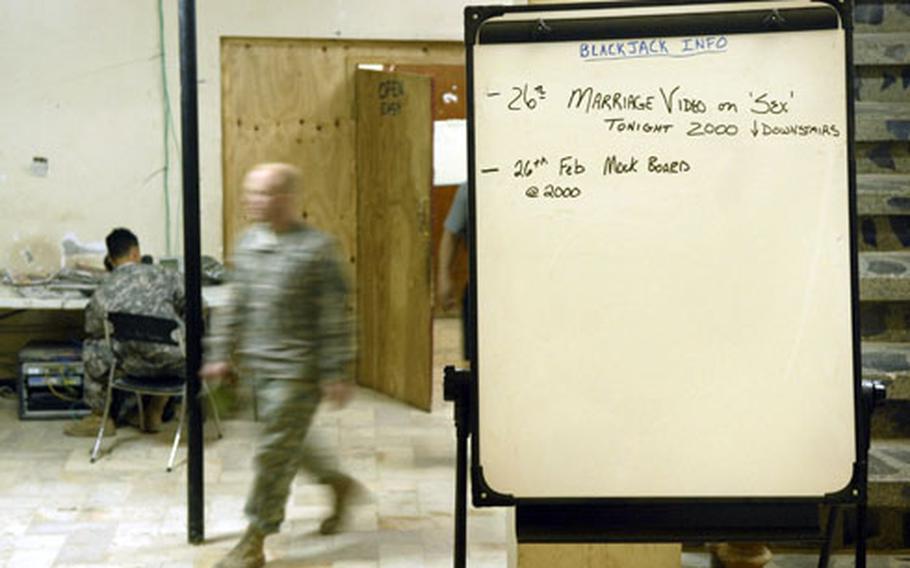 Buy Photo
A catchy notice near the command post lets soldiers from Company B, 1st Battalion, 35th Armor Regiment, in on a marriage enrichment video that will be shown at Combat Outpost Dolby. (Ben Bloker/Stars and Stripes)

PATROL BASE DOLBY, Iraq &#8212; A group of Baumholder, Germany-based soldiers huddled around a TV set to watch a sex video, with the viewing hosted by their battalion chaplain.

The roughly hourlong video was an installment of a Christian-based DVD series titled "Laugh Your Way to a Better Marriage" by minister Mark Gungor.

The episode shown recently at this patrol base southeast of Baghdad offered tips on how to improve sexual relations within a marriage. It was all very PG-rated.

With the divorce rate for enlisted soldiers at a 19-year high, advice for strengthening marriages could not be more relevant.

The proactive approach of showing marriage seminar DVDs to deployed troops is an effort by Army Chaplain (Capt.) Archie Durham of 4th Battalion, 27th Field Artillery Regiment to strengthen marriages. The battalion is known as Task Force 4-27 during its current deployment.

A husband for 15 years, Durham reads books and watches DVDs on marriage. He equates watching marriage seminars to the Army conducting preventive maintenance on vehicles.

The five-part series by Gungor gives advice on communication, relationships and yes, sex. The video shown recently, which contained no nudity, profanity or sexual acts, offered a humorous look at how couples can better please each other physically.

Even dealing with the taboo topic of sex, Gungor managed to keep his humor and mild innuendo all very church-appropriate. He uses Scripture to reinforce his points.

Capt. Allan Buck Carroll, commander of Company B, 1st Battalion, 35th Armor Regiment, got engaged the day before he left for his first deployment to Iraq. Now he is on his third deployment and remains happily married.

Just as he has during his previous deployments, Carroll constantly communicates with his wife.

"I come out of deployments having a stronger marriage than I do going into deployments," he said. "Anything that we have like this where you can learn more about your relationship with your wife and come out of this deployment even being a better husband is really important &#8212; especially with, right now, marriage being on the downturn in the United States but even more so in the Army because of the deployed state."

On the video, Gungor mentioned that one of the keys to pleasing women sexually is to give them time. Gungor then said that the male sexual experience lasts only two minutes on average.

One thing that can increase a man&#8217;s endurance is frequency of encounters, he said.

Gungor then jokingly told the women in his studio audience they shouldn&#8217;t expect more than two minutes from their men if they only had sexual encounters with their husbands once every two weeks.

A soldier watching the video deadpanned a hysterical one-liner.

The divorce rate of the general population in the United States for the 12 months preceding February 2008 was 3.6 percent.