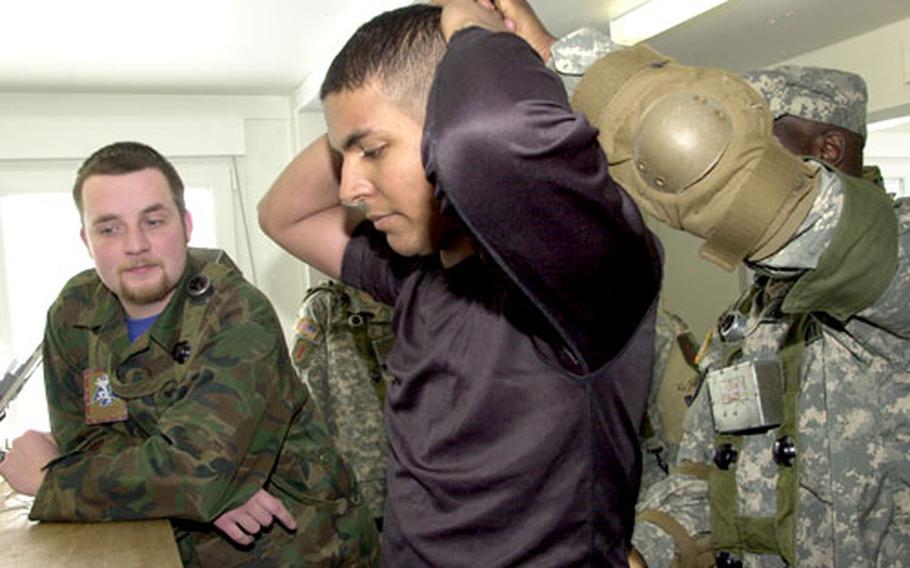 HOHENFELS, Germany &#8212; Civilians on the battlefield, also known as COBs, are stealing the hearts of U.S. soldiers training in Germany.

Up to 500 COBs &#8212; who portray Iraqi and Afghan civilians &#8212; live in fake towns at Hohenfels for three-week stretches during training exercises. To make the mock villages &#8212; designed to replicate urban areas in Iraq and Afghanistan &#8212; as realistic as possible, the Army employs both men and women, often German university students, who work for 100 euros per day.

The close interaction between the German COBs, or &#8220;village people,&#8221; and U.S. soldiers, who play the role of insurgents, has led to several romances, soldiers at Hohenfels said this month.

Sgt. Arturo Brito, 29, of the Hohenfels-based 1st Battalion, 4th Infantry Regiment, said he met his German wife, Berlin student Elena Friedmann, also 29, during a 2002 exercise in which she played a Kosovo COB and he played a militant.

The pair met several times during exercises in which they assumed different roles. Sometimes Brito was a policeman or a civilian, and once Friedmann played a terrorist, he said.

Their story will be featured on a German television documentary later this year, Brito said.

They are not the only couple who has found romance on the range: Brito says he knows of five other soldiers who married COBs.

Another 1-4 soldier, Staff Sgt. Stephen Hamlin, 28, of Rochester, Mich., said there is a lot of interaction between soldiers and COBs.

Hamlin, who is also married to a German he met outside of work, said he knew several soldiers who married COBs. But he did not recommend looking for romance on the range.

&#8220;The Germans are thinking they are here to be an actor or actress. It is better to go out in the country and meet Germans in their villages where Germans are Germans. Both Germans and Americans have a different point of view when they come here,&#8221; he said.

One factor that could work against romance on the range is the installation of dozens of cameras inside the mock towns at Hohenfels.

Brito said he paid no attention to the cameras, which had been at the largest mock town, Ubensdorf, for years. But recently cameras had been installed at all the fake villages in the training area, he said.

For its part, the Army briefs both soldiers and COBs that there should be no intimate relationship while in the field, said Maj. Mike Durham, public affairs officer for Joint Multinational Training Command at Grafenw&#246;hr.