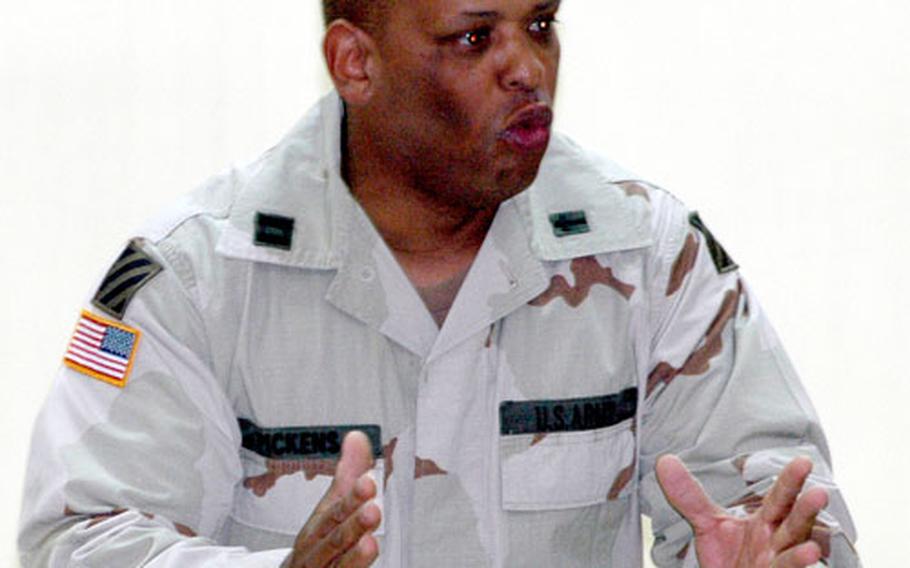 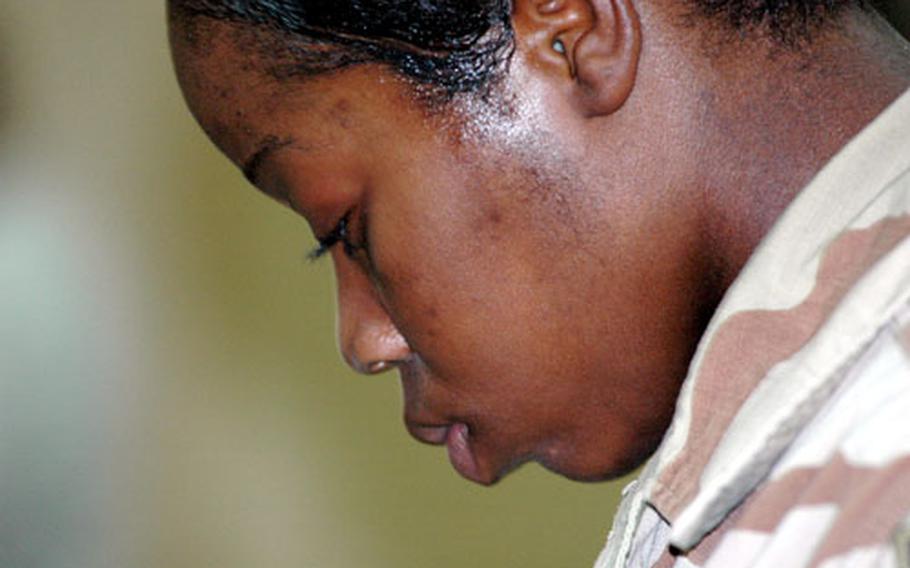 They were raised in Protestant churches in places like Chicago and New York and Miami, small towns across the South and even as far away as Trinidad.

But on this Sunday, near Baqouba, Iraq, dozens of soldiers came together, laid down their weapons in makeshift pews, and settled in for a two-hour gospel service that offered a rare break from their daily duties in the battle-scarred and sun-baked desert.

Moments later, Capt. Tommie Pickens stepped up to the plywood pulpit and welcomed soldiers to the service.

Like at many bases in Iraq, Sunday gospel services see by far the largest turnout among the weekly religious programs. More than 70 people turned out for the nearly two-hour service at Camp Warhorse, compared to roughly a dozen for the two other Protestant services and about 20 for the Catholic services.

Many soldiers say they attend church downrange for a sense of normalcy. At the same time, however, the testimonials rendered here clearly reflected life in a war zone.

The left side of Austin&#8217;s body was showered with shrapnel on Aug. 23 when a suicide bomber struck an Iraqi dining facility in the nearby city of Al-Khalis.

Maj. Keith Hayes of Columbia, S.C., recalled his frustration when an Iraqi contractor he works with was kidnapped.

&#8220;I was kind of mad and upset, wondering if he was going to be returned, or be in a video getting his head chopped off,&#8221; Hayes stood up and told the other soldiers.

Spc. Diana Layne, a 24-year-old native of Trinidad who later moved to Brooklyn, N.Y., stood up and talked about how her faith recently helped her through trying times.

&#8220;The last couple weeks have been real rough. My grandfather died on my birthday. He raised me and he was like the only father figure in my life,&#8221; she said, her voice cracking as she spoke to the congregation.

For Layne, enemy fire finally prompted her to take up a friend&#8217;s suggestion that she began each day by reading Psalm 23.

Turnout for the Gospel service began to top 100 people shortly after the 3rd Infantry Division soldiers arrived in January from Fort Benning, Ga. The crowd quickly overflowed the chapel here and the service was moved to the base&#8217;s movie theater, a plywood structure that seats up to 150.

For many soldiers, the daily threats of life in Iraq lend a new urgency to developing their faith.

For some, deployment in Iraq has sparked a new commitment to attending church.

A friend here in the Army encouraged David to start coming to the gospel service several months ago, and he believes it has made him more patient in his daily work.

For 1st Sgt. Ray Daniels, 37, from Americas, Ga., church here is the same as it is back home, except here he attends without his wife, his 4-year-old son and 11-year-old daughter.

Spc. Natasha David who grew up in Brownville, N.Y., said going to church helps her to dismiss any fears about the dangers of living in a combat zone.