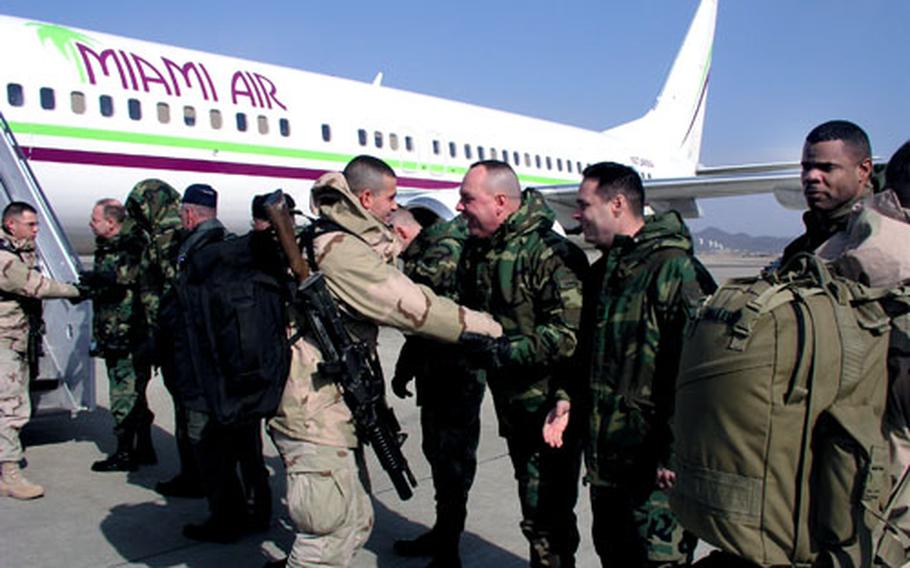 Soldiers of the South Korea-based 728th Military Police Battalion arrive at Osan Air Base in South Korea on Tuesday after a deployment to Iraq. The troops, based in southeastern South Korea, flew to Iraq last October and pulled prison security tasks at Camp Bucca. (Franklin Fisher / S&S)

OSAN AIR BASE, South Korea &#8212; With icy winds blowing and an Army band waiting to welcome them, soldiers from a South Korea-based military police unit returned to the country Tuesday after several months on deployment guarding detainees in an Iraqi prison.

The 68 soldiers are members of the Army&#8217;s 728th Military Police Battalion and are based at at Camp Hialeah in Pusan, Camp Carroll in Waegwan, and Camp Humphreys in Pyongtaek. The battalion is headquartered at Camp Henry in Taegu.

They sustained no injuries or deaths during their deployment, which lasted about 110 days, the Army said.

They had flown out of Korea on Oct. 20 from Osan Air Base and were assigned prison duties at Camp Bucca, now the main internment facility for suspected guerrillas in Iraq.

The battalion&#8217;s MPs already had finished their duties at the prison and were in Kuwait preparing for their return to South Korea when a riot erupted Monday at Camp Bucca.

Guards shot and killed four prisoners in the riot, during which some prisoners threw rocks and fashioned makeshift weapons, according to The Associated Press.

Some 5,300 inmates are interned at the camp, according to the Reuters news agency. The camp is near the port of Umm Qasr, in southern Iraq.

The troops flew into Osan Air Base in a chartered commercial jetliner. As they came down the boarding stairs in desert- tan uniforms, they were greeted by a line of officers and senior noncommissioned officers, who shook their hands, patted them on the shoulder, saying &#8220;Welcome back.&#8221;

They were bused to a nearby hangar for a brief welcoming ceremony. Waiting in one corner of the hangar was the 8th U.S. Army Band. As the MPs began filing into the hangar, the band struck up a military march.

Col. Faulkner Heard III, commander of the 8th Military Police Brigade, spoke next, and told the troops: &#8220;Your performance over the last 3&#189; months has been nothing short of outstanding.&#8221;

The troops will not return immediately to their units, Crowe told Stars and Stripes after the ceremony.

Instead, they were to spend several days undergoing &#8220;reintegration&#8221; to help ease their adjustment from a war-zone environment to that of their home units.

Leaders within the battalion have been told to keep an eye out for any signs of psychological or emotional stress that can surface after troops have returned from a war zone.

In addition, a chaplain was to speak to the troops this week about the possible psychological and other effects of the deployment. He&#8217;ll outline &#8220;avenues if they want to talk to anybody for any reason whatsoever,&#8221; said Crowe, and will talk about &#8220;coping strategies &#8230; how to integrate back into the family, and those kinds of things.&#8221;

The troops also were to get help with any outstanding financial and other administrative matters this week, he said.

And they were to be given a special briefing that would update them on important changes that have occurred in South Korea while they were in Iraq, including a Korea-wide change in curfew hours and a change in the definition of underage drinking, Crowe said.

&#8220;The NCOs in the platoon are going to get spread out&#8221; to other elements of the battalion and can share knowledge and insight they gained during their Iraq duty, Smith said.

The troops will be housed this week at transient billeting on Camp Walker in Taegu and will return to their regular duty stations on Friday, Crowe said.

The battalion plans a larger-scale welcoming ceremony for them at 11 a.m. Friday at Camp Walker, he said.