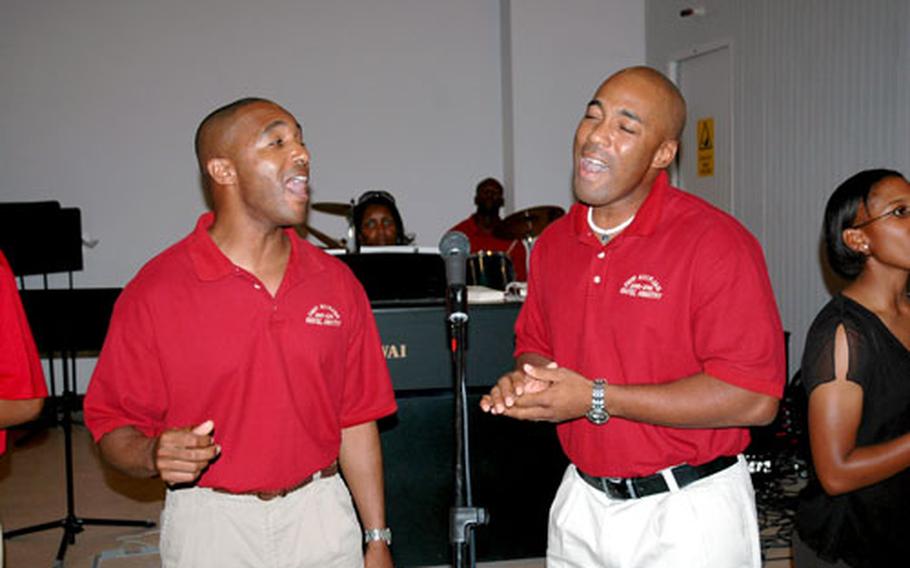 Member of the Camp Arifjan gospel choir perform during a service at the base in Kuwait. (Allison Perkins / Special to S&S)

CAMP ARIFJAN, Kuwait &#8212;- Every day, Sgt. 1st Class George Nolen fills the growling stomachs of 8,000 soldiers, as the noncommissioned officer in charge of one the dining facilities here.

On the weekends, he helps feed their spiritual needs, as a member of the camp&#8217;s growing gospel choir.

The choir performs during the gospel service every Sunday afternoon at the newly constructed Camp Arifjan chapel. The tiny choir of just 10 people clap and sway as they sing.

The crowd in front of them is moved to its feet. Some parishioners dance, some clap their hands, some sway with their arms raised and their eyes closed. Almost everyone sings along.

Nolen, a National Guard soldier who sings at his home church in Tennessee, said the first thing he did upon arrival in Kuwait was find a choir to sing in.

Capt. Thomas Catchings, 35, said the clear, sweet tone of his tenor voice, which had some crowd members near tears at Sunday&#8217;s service, is a gift he wants to share.

&#8220;Anything given to me is not for me to keep, but is something for me to bless someone else with,&#8221; he said. Catchings, also a National Guard soldier, sings with his church choir in Mississippi.

Those listening nearby would run screaming if Akinseye opened her mouth to sing &#8212;- at least, that is what she once professed.

But she visited the chapel to visit a friend during the choir&#8217;s rehearsal and, she said, she was moved.

&#8220;I found myself singing with them. I joined that day,&#8221; she said, adding that her involvement with the choir has even been one of the key factors in her decision to extend her tour in Kuwait.