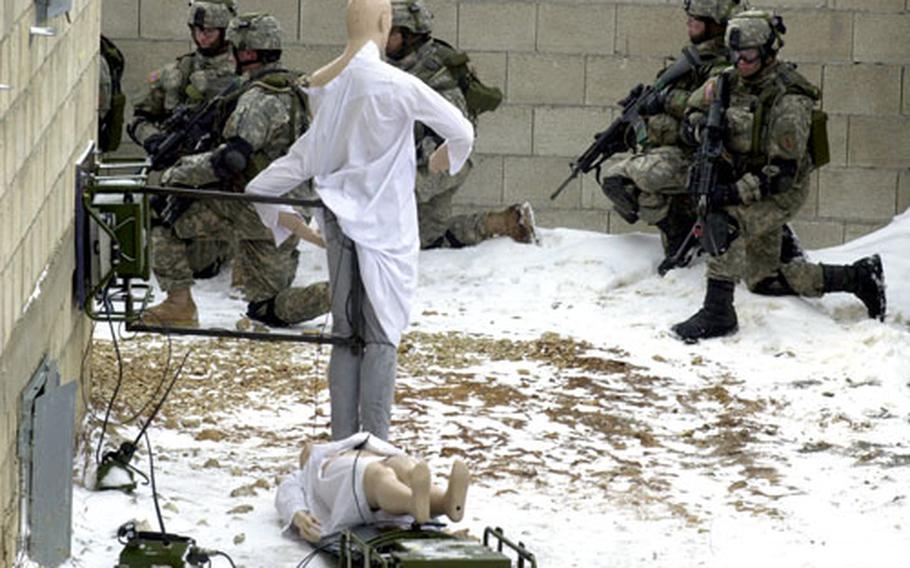 Soldiers from the 1st Battalion, 18th Infantry Regiment regroup after taking out a pair of mannequins with simunitions Monday at Hohenfels, Germany. (Seth Robson / S&S)

Soldiers from the 1st Battalion, 18th Infantry Regiment regroup after taking out a pair of mannequins with simunitions Monday at Hohenfels, Germany. (Seth Robson / S&S) Soldiers from the 1st Battalion, 18th Infantry Regiment train Monday at Hohenfels, Germany. The soldiers, who have been training for seven weeks at Grafenwöhr and Hohenfels, are headed back to their home bases before going to Iraq. (Seth Robson / S&S) 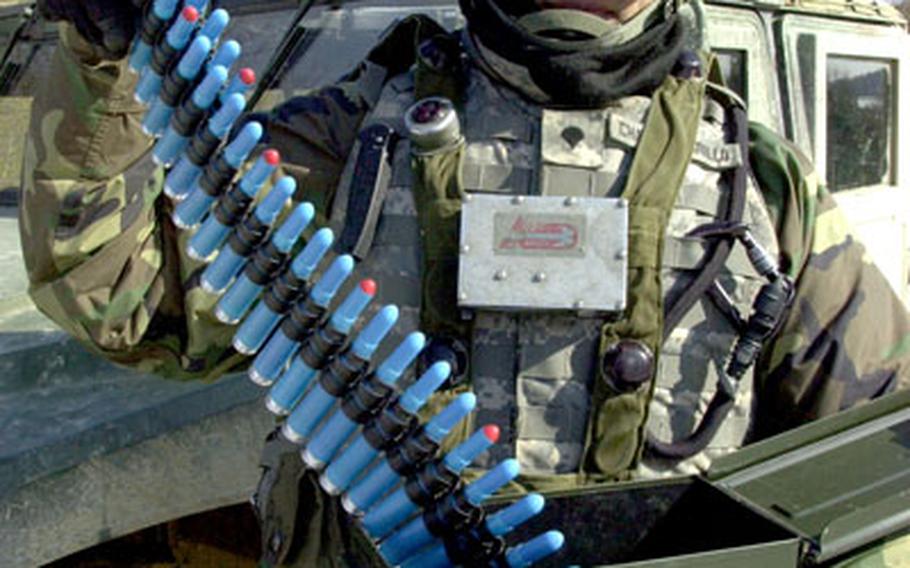 Spc. Marcos Chavez, 33, of Erie, Col., fired plastic .50-caliber bullets from the top of a Humvee during training on Monday. (Seth Robson / S&S) 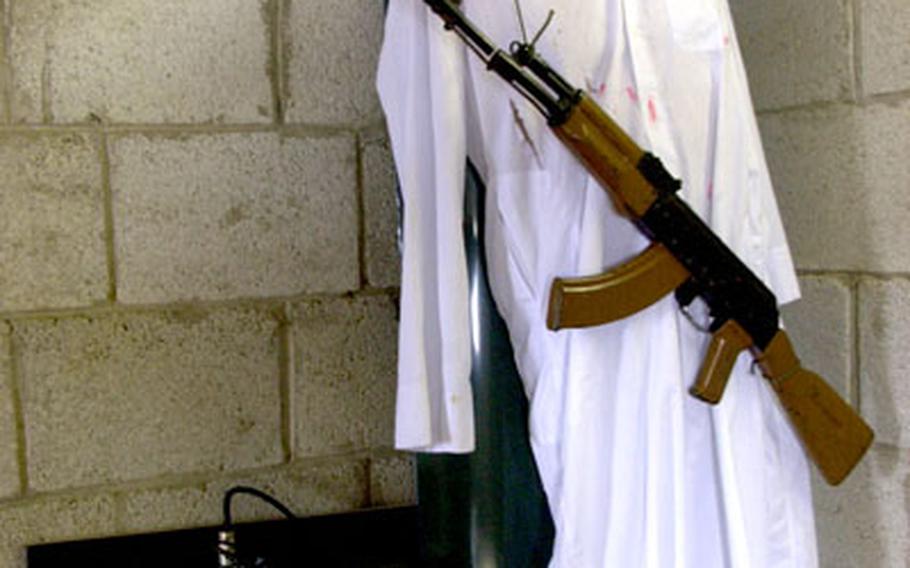 A mannequin&#39;s clothing is covered in red marks showing it has been shot with simunitions. (Seth Robson / S&S)

At the Schwend Military Operations in Urban Terrain site &#8212; an artificial Iraqi town at Hohenfels &#8212; 1-18 soldiers conducted a cordon-and-search operation to detain a &#8220;high-value target&#8221; in one of the buildings.

Their targets were mannequins set up as insurgents in and around the buildings. The mannequins, which are a lot more realistic than the Army&#8217;s old green plastic pop-up targets, are designed to spring at soldiers from behind corners and slump over when they are shot. Soon, they will be wired to speakers that will emit a scream after they are shot, trainers say.

The training brought back memories of Iraq for senior Hohenfels observer controller Lt. Col. Peter Newell, 43. The Danville, Vt., native, who led the 2nd Battalion, 2nd Infantry Regiment in the battle for Fallujah in 2004, said the simunitions training was designed to make soldiers think about what they were shooting.

&#8220;Simunition allows us to get the training benefit you normally get with live fire but you can now get it at these MOUT sites and not tear up the buildings,&#8221; he said.

On the other side of the training area, at the improvised explosive device lane &#8212; a strip of road that replicates an Iraqi freeway &#8212; scouts from 2nd Platoon, 1st Battalion, 77th Armored Regiment conducted a live-fire convoy using simunition.

This time, the 6-6 Apaches fired 30 mm simunition at pop-up targets beside the road before the scouts engaged more targets with simunition from M-4 rifles and plastic bullets from Humvee-mounted .50-caliber machine guns.

Sgt. Matthew Commins, 30, of North Field, Vt., said the .50-caliber plastic bullets fired by the gunner on his Humvee were very realistic, but the M4 bullets were too quiet.

The Joint Multinational Readiness Center operations group commander, Col. Tom Vandal, said the simunition exercise was the first live-fire training at Hohenfels in 19 years. JMRC also is planning to buy rubber walls for buildings, so conventional ammunition can be used at MOUT sites, he said.

Simunition will be used again in May by 1st Battalion, 1st Cavalry Regiment, 1st Armored Division.