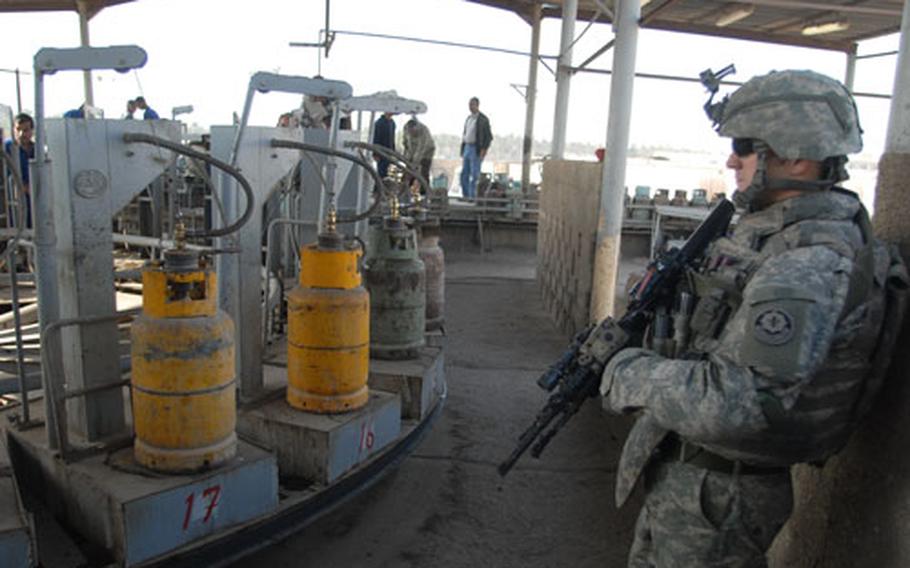 BAGHDAD &#8212; The black market price of propane is falling in Baghdad as 2nd Cavalry (Stryker) Regiment soldiers clamp down on militia interference in the distribution of one of Iraq&#8217;s most important household energy sources.

Capt. Travis Cox, fire support officer with 2nd Squadron, 2nd Cavalry Regiment, who deals with civil-military affairs, said the black market propane price in his unit&#8217;s area of operations &#8212; around Baghdad&#8217;s volatile East Rashid neighborhood &#8212; has fallen from 30,000 Iraqi dinar a bottle when the unit arrived 11 weeks ago to about 20,000 dinar.

Cox reckons that&#8217;s because most residents are getting their monthly government propane ration from the Sarmoud Propane Station, a factory that fills thousands of 30-liter propane bottles each day.

When 2nd Cav arrived in Baghdad, the Shiite Mahdi Army had taken control of the station, commandeering truckloads of propane bottles that should have gone to ration card holders. The Mahdi Army then sold it, with prices inflated if the customer was Sunni, Cox said after a visit Saturday to the station.

Fouad Lghzaoui, who advises the Army on Iraqi culture, said the Mahdi Army was making an estimated $500,000 a month from illicit propane sales.

&#8220;Propane is a huge commodity for the people that is related to them having the ability to cook and heat their homes. We saw a problem because of the (Mahdi Army) infiltration and extortion in all parts of propane distribution,&#8221; Cox said.

At Sarmoud, one of a number of distribution centers for the gas in Baghdad, propane was distributed only once every three to six weeks, he said.

&#8220;We turned propane into an every week thing with the initial goal of enabling Sunni from Hador neighborhood to get propane from Sarmoud Propane Station,&#8221; he said.

Ironically, propane is a cheap and plentiful resource in Iraq. Anbar province, just west of Baghdad, is sitting on one of the world&#8217;s largest reserves of the gas, Cox said.

Sarmoud Propane Station is a walled compound about the size of four football fields. It includes large propane holding tanks, filled by trucks that bring the gas north from Babil province, and a propane-filling factory where tanks move along on conveyor belts before they are filled, weighed and loaded on trucks. An Arabic sign on the factory wall reads &#8220;safety first,&#8221; but there is a strong smell of gas leaking from rusty bottles.

Outside the station&#8217;s front gate, dozens of trucks and tractors wait to collect propane bottles. The bottles are dropped off at various neighborhoods on designated days, Lghzaoui said.

Station manager Sheik Nouri said his workers, a mix of Kurds, Sunnis and Shiites, fill and distribute about 3,000 propane bottles each day, a lot fewer than the 25,000 bottles a day they sent out in Saddam Hussein&#8217;s day.

Nouri said he&#8217;s between a rock and a hard place because he has to satisfy U.S. forces but is getting threats from the Mahdi Army.

Now, the Strykers escort the propane distribution trucks, especially those bound for Sunni neighborhoods where there has been trouble, Nouri said.

The Mahdi Army has lost a lot of income and it is upset, but it still is getting some money from the station. A patrol recently saw a truck from the plant giving bottles away to the Mahdi Army, but members were busy with another mission and could not intervene, Lghzaoui said.

The 2nd Cav&#8217;s next step will be to get Iraqi security forces more involved in safeguarding propane distribution, Cox said.

Soldiers have been collecting Iraqi police, who were too scared to escort trucks into Sunni neighborhoods, and taking them along on propane distribution runs, he said. But the police failed to show up at the station on Saturday.

&#8220;The Iraqi army does an excellent job distributing all resources that are organized under the ration card, and we look forward to transitioning the distribution to the Iraqi army. It is being successfully executed by them in the neighboring Dora neighborhood,&#8221; Cox said.