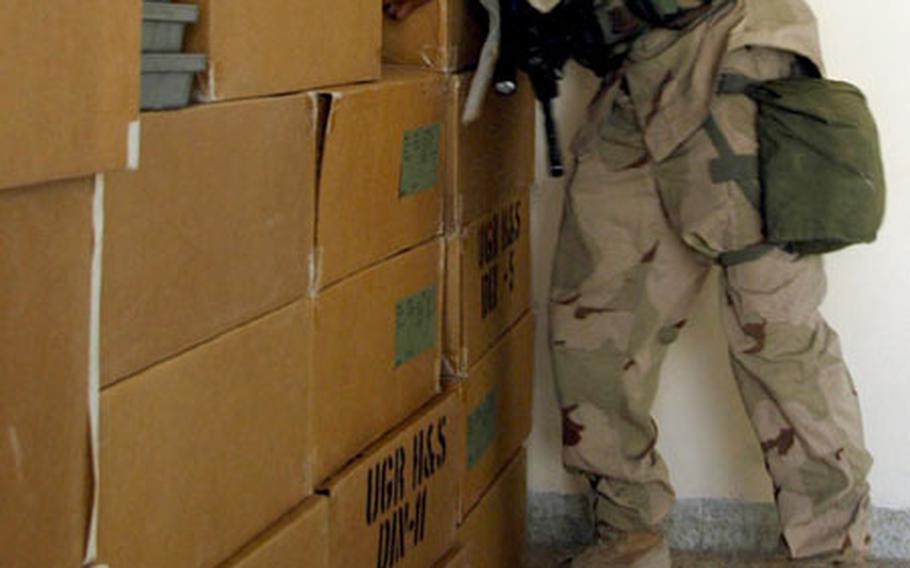 Epps, 40, command sergeant major of the 2nd Battalion, 14th Infantry Regiment, 10th Mountain Division out of Fort Drum, N.Y., went to the command&#8217;s chaplain for a suggestion, and Capt. Sangjoon Won knew just whom to ask.

He tapped the Army&#8217;s 404th Civil Affairs Battalion out of Fort Dix, N.J., which has spent more than two months in the country identifying the needs throughout Iraq&#8217;s northern region.

So on Thursday, the Fort Drum soldiers, who are now operating out of the airfield in Irbil, hooked up with civil affairs and trekked downtown to the Khatuzeen Center for Social Action. They took along more than 30 boxes of canned meats, vegetables and pasta no longer needed to feed the 10th Mountain, whose presence here has decreased from 3,000 to fewer than 1,000 soldiers.

The Khatuzeen Center helps the poorest people of Irbil, focusing on aid for children and women, said coordinator Chilura Hardi.

The 3-year-old center&#8217;s programs run the gamut from toy and food distribution to a summer school and play center for children, from job training and placement for women, to adult literacy and personal hygiene classes to a social network for women, said Hardi, who speaks English.

The center&#8217;s reach extends to the city of Kirkuk, about an hour&#8217;s drive south of Irbil, where it focuses on education for young girls.

The 12 years of autonomy in northern Iraq following the 1991 Persian Gulf War has opened many doors, &#8220;but those in the poorer sections still suffer greatly,&#8221; said Hardi, who estimated 50 percent of Irbil&#8217;s population falls below the poverty line.

The soldiers&#8217; visit was not just a move of good will, but an educational experience. Staff Sgt. William Foster, 33, asked many questions, wanting to know about the school system, women&#8217;s rights, and religious suppression and education.

And he was refreshed by Hardi&#8217;s candor when she said the Kurds felt betrayed by the U.S. government following the &#8217;91 Gulf War when the government pulled out without helping to restore basic needs such as power, sewer, water and employment opportunities.