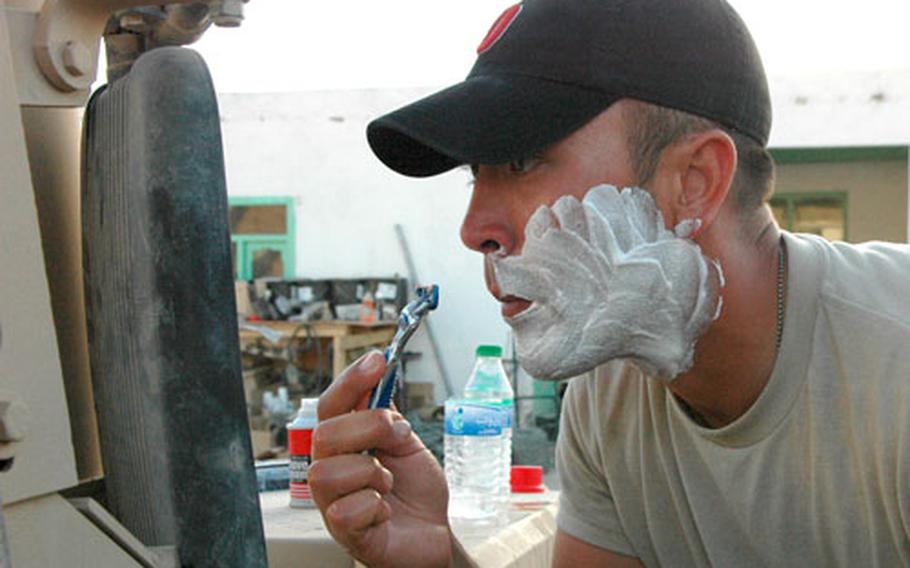 Staff Sgt. Timothy Pennartz, 29, from Dayton, Ohio, uses a Humvee mirror to shave at Forward Operating Base Mizan. Soldiers say they usually get one shower a week. (Anita Powell / S&S)

FORWARD OPERATING BASE MIZAN, Afghanistan &#8212; There are no hot showers, no running water, no flushing toilets, no Internet, and limited phone and electricity time. Mail, meat and women are rare sights.

The men of 3rd Platoon, A Company, 2nd Battalion, 4th Infantry Regiment are living at about the same standards as the Afghan people in this dusty, mountainous corner of southern Afghanistan.

But the men of the platoon, a Fort Polk, La.-based component of the 10th Mountain Division, say they wouldn&#8217;t have it any other way.

Plans are under way to enlarge and improve the compound to include a shower trailer, a kitchen and a morale and recreation center. But for now, the men sleep at least six to a room in an abandoned police station, with soldiers crammed into hallways, nooks and even a bathroom that&#8217;s not in use.

Electricity is available four hours nightly. One dusty weight bench serves as a gym. Showers &#8212; taken in a field shower, with bottled water &#8212; are for some a monthly occurrence. Hot meals come out of the makeshift kitchen &#8212; it has no refrigerator &#8212; about four times a week.

Mail arrived recently for the first time in a month, bringing with it five-day-old copies of Stars and Stripes. The men voraciously consumed both.

They also attacked a recent shipment of steaks from Forward Operating Base Lagman, a three- to five-hour drive across dusty, gnarled plains, past tiny villages and bright green orchards.

When asked what one improvement they would make, if they could, the answer was unanimous.

Without contact with the world, the men turn inward for entertainment by competing in a variety of events, from normal fare like jumping rope to arm wrestling to more esoteric contests such as steak-eating and &#8217;80s dancing. A white board in the hallway keeps track.

&#8220;We compete in pretty much everything you can possibly compete in,&#8221; said platoon leader 1st Lt. Brian Bourque, 26, of Wolfeboro, N.H., a self-proclaimed master jump-roper.

Hardship aside, all say the experience has been worthwhile.