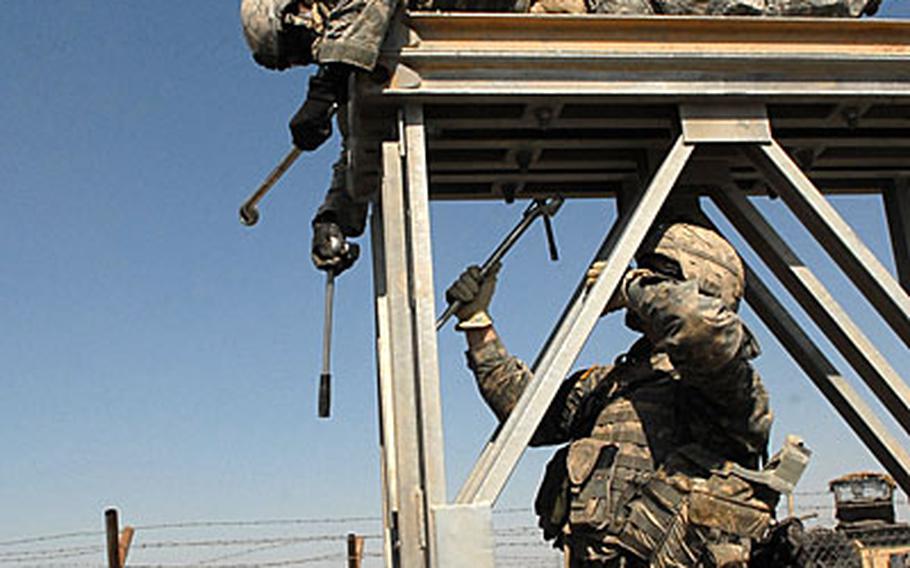 Soldiers of the 502nd Engineer Company of the 92nd Engineer Battalion work on repairing a bridge Aug. 16 that was destroyed by a suicide bomber. (Zeke Minaya / S&S)

Soldiers of the 502nd Engineer Company of the 92nd Engineer Battalion work on repairing a bridge Aug. 16 that was destroyed by a suicide bomber. (Zeke Minaya / S&S) 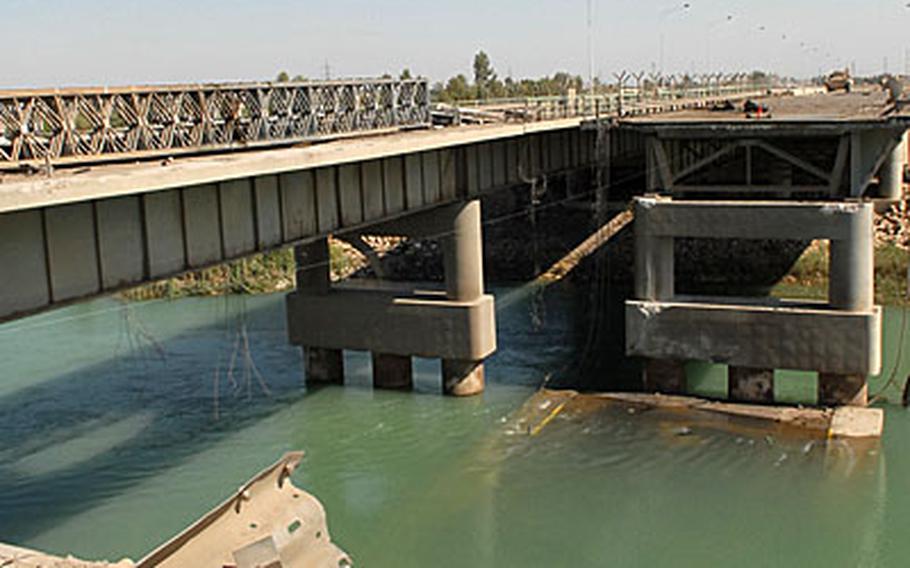 The damaged bridge, about 2 kilometers north of Camp Taji, will take a few days to repair, after which it is possible only military traffic will be allowed access. (Zeke Minaya / S&S)

Days after a suicide bomber destroyed a bridge about two kilometers north of Camp Taji, snapping a crucial supply line, American soldiers were wielding tools and operating cranes to rebuild the fractured span.

The attack on the bridge, which reaches over the Grand Canal, occurred Tuesday. Eight Iraqi civilians were believed to have been killed by the vehicle bomb, which was powerful enough to completely sever one of the two lanes. Several vehicles also plunged about 25 feet into the fast moving current below. The Grand Canal is an off-shoot of the Tigris River.

Military officials said they believe al-Qaida in Iraq was behind the attack and it may have been an attempt to disrupt the busy supply route. Military officials at Camp Taji said that while there may be shortfalls in some nonessential supplies in the short term, military operations would not suffer.

Officials said they expect the bridge to be repaired in the next few days. Soldiers from the 502nd Multi Role Bridge Company of the 92nd Engineer Battalion are working around the clock in 12-hour shifts to restore the fallen structure.

Spc. Jeffrey Lorsung, a 20-year-old from Oregon and a member of the 502nd, said the explosion not only completely snapped the southbound lane of the bridge, but was powerful enough to shift the neighboring northbound lane 10 feet.

The bridge has been attacked before. In May, the northbound lane was destroyed. In the most recent attack, the suicide bomber managed to get past an Iraqi army checkpoint before getting on the bridge to detonate his deadly cargo.

The bridge is part of Highway 1, a major artery through the country, with access to several major American bases in Iraq. There is a possibility that once the bridge is repaired that only military traffic will be allowed across, military officials said.

The attack comes on the heels of the recent launching of high profile operations north of the Baghdad.