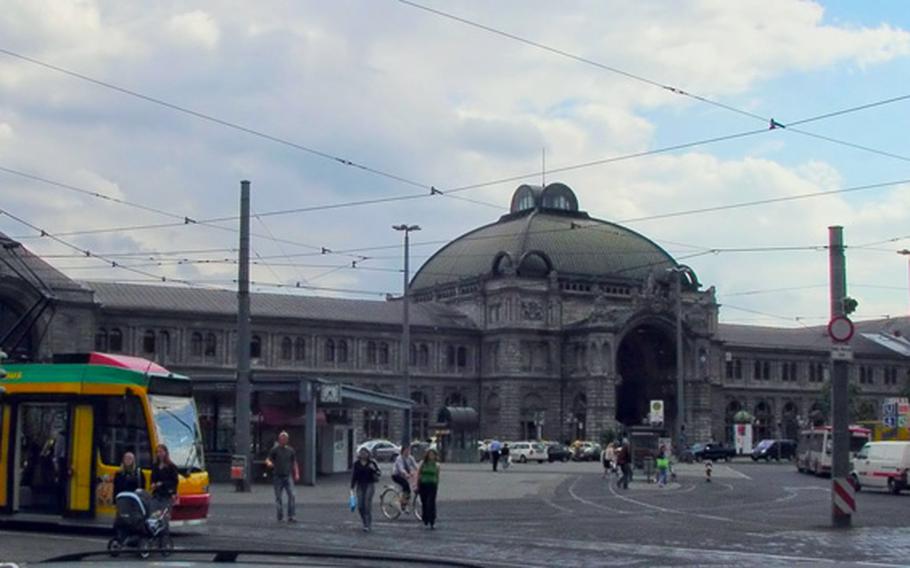 The train station in Nuremberg, Germany, where a U.S. soldier was injured when he fell off a platform. The soldier, whose foot was severed, is recovering in the U.S. (Public domain photo)

Army Sgt. Dennis Keyes shielded his wife’s eyes when he saw a young man fall onto the tracks at the Nuremberg train station as a train sped away.

Then, he rushed to help.

“His foot was severed and it was right in the middle of the track,” said Keyes, of the Vilseck-based 2nd Cavalry Regiment.

It was during the early evening of Dec. 22 at the main train station in Nuremberg. Keyes and two other soldiers — all strangers to one another — came together to rescue a man they soon would discover was one of their own.

“The soldier did fall, most likely because he was drunk, on the rails and at the same moment the train started to run,” said Andreas Bauer from the German federal police.

The U.S. soldiers turned first responders had all arrived at the train station separately after a Saturday afternoon trip to Nuremberg, which is about a one hour train ride from Vilseck and a big attraction during the Christmas season.

Miller has since been transferred to the San Antonio Army Medical Center in Texas where he is in stable condition, according to the 2nd Cavalry public affairs office.

Though the soldier lost part of his leg, his fellow soldiers said their quick response likely saved his life.

“Everyone else that was there scattered away,” said Spc. Jessie Chelf of the Grafenwöhr-based 172nd Infantry Brigade, who was one of the rescuers. “If we were not there, I’m pretty sure he would have died.”

Keyes said the injured soldier had stepped off the train, but then tried to get back on it as if he had gotten off at the wrong stop. When the door wouldn’t open, he went to another door trying to get access. The soldier then bent down and lost his balance, falling to the tracks just as the train took off, Keyes said.

“I jumped down there and checked for a pulse” Keyes said. “He was twisted up and he was unconscious at that point.”

Keyes said he was concerned about moving the victim, uncertain about whether he had a back or neck injury, but treatment down on the tracks wasn’t an option.

That’s when another soldier, Sgt. Kodzo Tse, also of the 2nd Cavalry Regiment, came over to help.

Tse was on the other side of the platform when he saw a person in the distance waving his arms for help.

“When I got there, I saw what was going on,” Tse said. “We got the guy off the track and put him on the platform.”

That’s when Chelf came upon the scene with his wife.

“When I ran down there, they had already put the tourniquet on,” Chelf said. “They were in the process of lifting him up.”

Together, the soldiers went to work.

“I had a shoe box and propped his leg up,” Chelf said.

This was the kind of catastrophic injury these infantrymen had spent countless hours learning how to treat. Chelf said he encountered such injuries during a recent tour in Afghanistan with the 172nd Infantry.

“Amputation is not hard to treat,” Chelf said. “You’ve got to make sure they’re still conscious and stop the blood flow.”

But the train station in Nuremberg was the last place he imagined putting such lifesaving first aid skills to work, Chelf said.

“I think that someone was looking out for him,” Keyes said. “Everything we needed was right there. He had a scarf and there was a stick there for a makeshift tourniquet.”

The soldiers continued to treat the man until German emergency responders arrived to transport the man to a local hospital.

During the rescue, Tse checked the victim for identification. That’s when they realized they were saving a soldier.

“He’s doing as good as can be expected,” said Keyes, who continues to get updates on the soldier’s recovery.