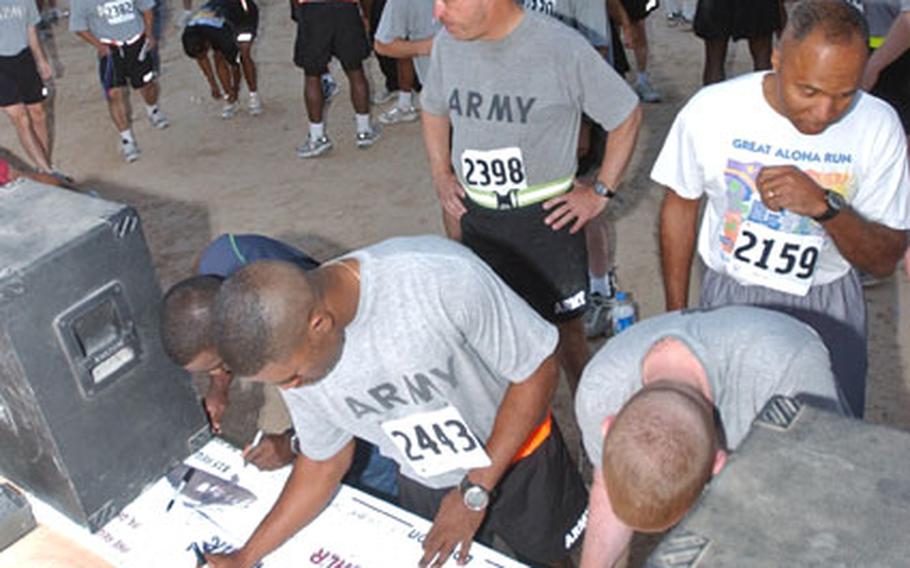 Runners sign a banner before the Big Easy 5K run Oct. 16 at Forward Operating Base Speicher near Tikrit, Iraq. (Courtesy of U.S. Army)

Runners sign a banner before the Big Easy 5K run Oct. 16 at Forward Operating Base Speicher near Tikrit, Iraq. (Courtesy of U.S. Army) 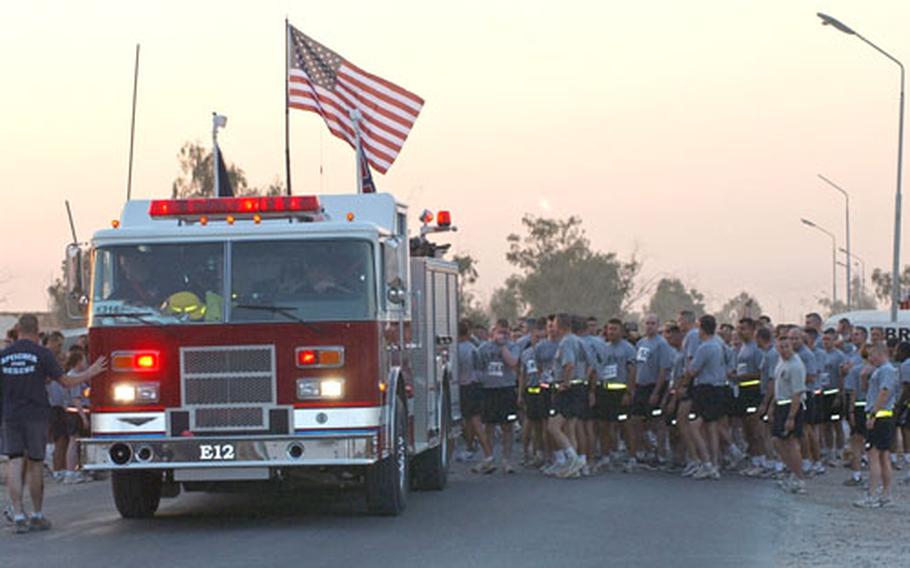 Runners line up behind a Forward Operating Base Speicher fire engine before the start of the Big Easy 5K Run. (Courtesy of U.S. Army)

A day after helping secure polling places for Iraqis voting on the constitutional referendum, U.S. soldiers near Tikrit pitched in to help another cause.

Some 500 soldiers and civilians at Forward Operating Base Speicher took part in a Big Easy 5K Run to raise funds for Hurricane Katrina victims. Another 200 people donated money.

All told, the efforts raised around $7,000, which will be sent to the American Red Cross Hurricane Relief Fund, officials said.

The event was about more than raising money, said 1st Lt. Alisha Ramsey, who dreamed up the event and coordinated it.

&#8220;It&#8217;s a symbol of who cared. It allowed everyone involved to release their stress and close out their frustration,&#8221; said Ramsey, a platoon leader with the 578th Signal Company, 17th Signal Battalion from Darmstadt, Germany. &#8220;Donating money online didn&#8217;t help make me feel like I was contributing,&#8221; she said in a military release.

It is the second deployment to Iraq for the battalion, which is headquartered in Kitzingen.

Damian Gonzalez, a civilian member of the FOB Speicher Fire Department, was the overall winner of the race, with a time of just under 15 minutes.

The top female finisher was Spc. Jessica Reed of the 313th Medevac Company out of Lincoln, Neb. Reed finished with a time of just over 17 minutes.

Ramsey said the timing of the event was meant to allow soldiers both arriving in country and leaving to participate, since a switch in deployed units is under way. During the course of the day, she said, several soldiers affected by the hurricane came to say thanks.

&#8220;Soldiers who told me their houses were flooded by 18 inches of water and their pets survived because they climbed on top of something have come up to me and said thank you,&#8221; Ramsey said.