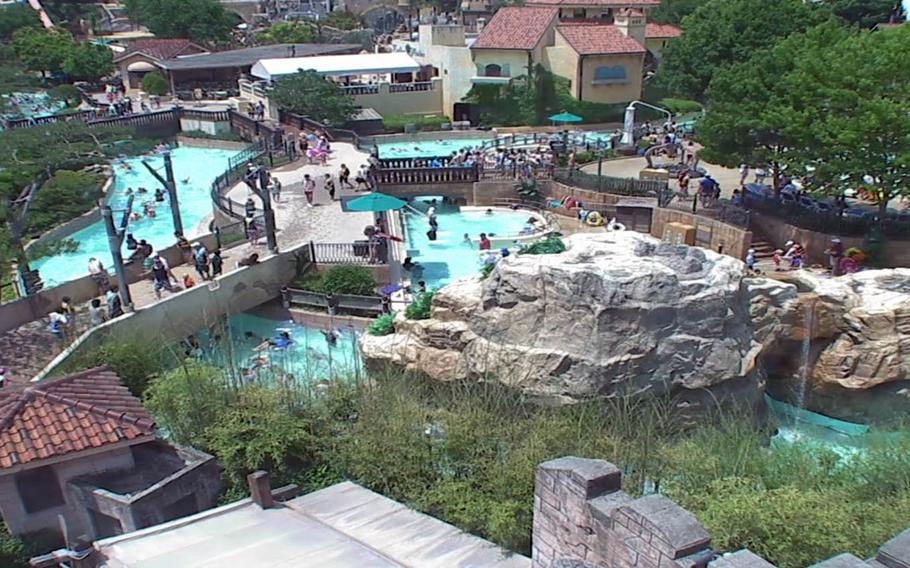 Two 2nd Infantry Division soldiers are accused of inappropriately touching female employees at Everland theme park's Caribbean Bay attraction May 31, 2014. They, along with a 3rd Camp Casey soldier, were allegedly drunk and causing a disturbance at the park, located south of Seoul. (Courtesy of Everland)

SEOUL — Three 2nd Infantry Division soldiers accused of causing a drunken disturbance at a South Korean water park earlier this summer have admitted wrongdoing in the case and will be sentenced next month, according to South Korean officials.

One of the Camp Casey-based soldiers has been charged with committing an indecent act by force, according to South Korea’s Supreme Court website, which also said he faced at least one additional unspecified charge. A Suwon District Court judge, who spoke on condition of anonymity, said that soldier is also charged with obstruction of the performance of official duties.

Two others were charged with the same obstruction charge, according to the website. The site listed the soldiers’ names only in Hangul, and court officials could not confirm their names in English.

A Suwon District Court spokesman said anyone convicted of committed an indecent act by use of force could be fined as much as 15 million won, the equivalent of about $14,800, or face a maximum prison sentence of 10 years.

The maximum sentence for someone convicted of obstruction of the performance of official duties could be sent to prison for as long as five years or fined up to 10 million won, or approximately $9,860, he said.

The soldiers previously have been identified by 2ID as a private, a private 1st class and a specialist with the 210th Field Artillery Brigade.

2ID would not provide additional information about the soldiers or the charges against them. A spokesman, Lt. Col. Scott Rawlinson, said it was inappropriate to release their names because the case has not been resolved. However, an attorney involved in the case identified the men by their last names of Myers, Cobb and Wilkerson.

Police said the soldiers caused a disturbance at the Everland theme park’s Caribbean Bay water park May 31. They began smoking, and a female employee was guiding them to a designated smoking area when a soldier touched her shoulder, waist and back, according to previous statements from the Yongin Dongbu Police chief of criminal affairs.

A second soldier gave a worker at the park’s information desk a high-five but then did not let go of her hand and told her she was sexy. Authorities said that while the first soldier — who had touched the other female employee — moved his hips or buttocks, the second soldier made a remark the worker thought was sexual in nature and humiliated her.

One of the soldiers then, according to police, punched a male employee in the face, kicked him and refused to cooperate with authorities. An officer also was punched and spit in his face. The soldiers told police during questioning that they were drunk and remembered little of what had happened at the park.

Police also said the soldiers had been shooting at least one water pistol filled with alcohol at other patrons and stealing their food.

“I fully support the Korean prosecution of soldiers found to have violated Korean law, and I will not tolerate immature and thoughtless behavior,” Vandal said. Referencing another incident — an alleged taxi theft — in addition to the misbehavior at Everland, he said: “I will not allow two careless acts of indiscipline to tarnish 2ID readiness and our strong relationship with our Korean neighbors.”

The two incidents prompted South Korea in June to request that the U.S. military cooperate with efforts by Korean authorities to prevent crime and quickly address any crimes that occur. The foreign ministry also warned that although the number of cases involving the U.S. military is declining, public opinion against USFK could worsen because of recent alleged misbehavior.

The court spokesman said all three soldiers in the Everland incident admitted wrongdoing during their first hearing in the case this month. The men will be sentenced Sept. 17.