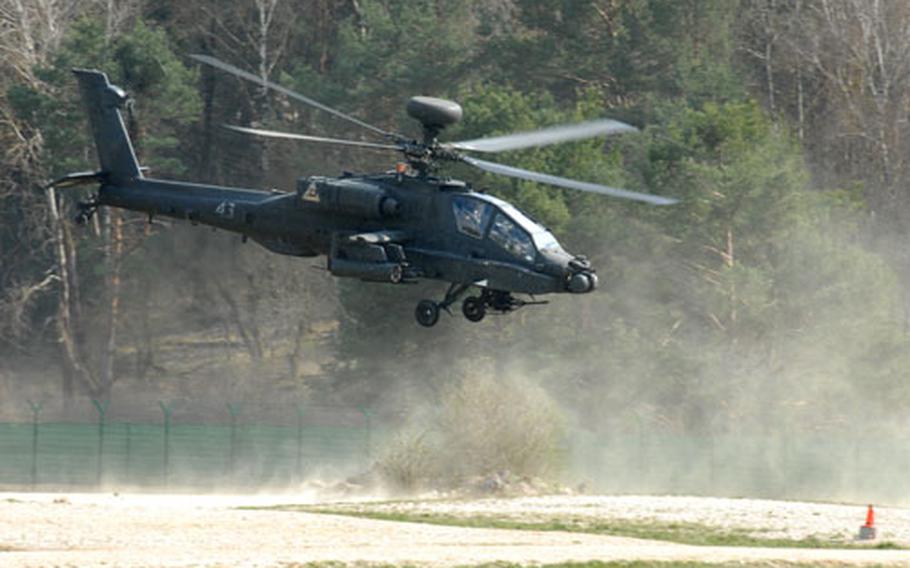 HOHENFELS, Germany &#8212; Changes to training, tactics and equipment mean insurgents are bringing down fewer U.S. helicopters in Iraq, according to 12th Combat Aviation Brigade soldiers getting ready to head downrange.

Soldiers from the 3rd Battalion, 159th Aviation Regiment are at Hohenfels this month for a mission-rehearsal exercise to prepare them for deployment to Iraq in the summer. The unit will join the rest of the brigade, which deployed on a 15-month mission last May and is stationed in Taji and Balad, Iraq.

Apache pilot Capt. Nathanal Patton, 30, of Mechanicsburg, Pa., said fewer helicopters are going down in Iraq these days than there were at the start of last year.

No statistics were provided by 12th CAB soldiers. However, during three weeks in January and February 2007 there was a spate of insurgent attacks on helicopters and accidents in Iraq that saw five military and two civilian helicopters go down, killing 23 personnel.

Patton, who has served in Afghanistan and visited Iraq on a fact-finding mission in February, attributed the decline in successful insurgent attacks on helicopters to advances in training and tactics and upgraded &#8220;aircraft survivability equipment.&#8221; The equipment includes flares that helicopters fire during flight to disrupt ground-to-air missiles, he said.

Other changes in tactics include flying at a different altitude and flying in teams of two instead of large formations, he said.

During the training at Hohenfels, the Apache crews expect to be &#8220;attacked&#8221; by insurgent role-players armed with simulated ground-to-air missiles, he said.

Another 3-159 soldier, 1st Sgt. Nate Mahaney, 38, of Presque Isle, Maine, said training is the key to fewer helicopters getting shot down.