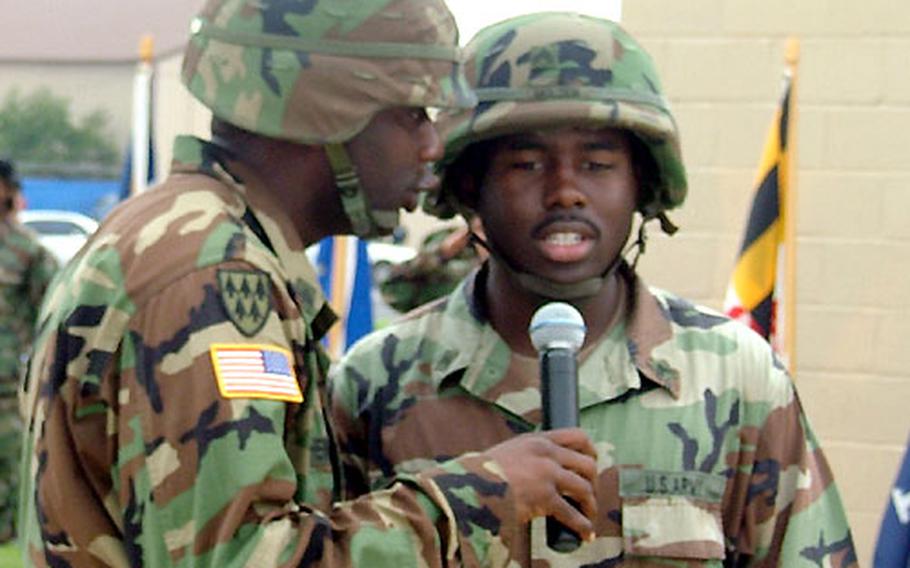 At Kwangju Air Base in South Korea, Sgt. Gerald Henderson, left, and Cpl. Perry Molden sing the national anthem a cappella at an official ceremony, something they’re increasingly asked to do. Both are assigned to Army’s Headquarters and Headquarters Battery, 2nd Battalion, 1st Air Defense Artillery Regiment, part of the 35th Air Defense Artillery Brigade. (Courtesy of U.S. Army)

PYONGTAEK, South Korea &#8212; More than a few times in the barracks at Kwangju Air Base in South Korea, some soldier near the end of his tour has been surprised with what you might call parting words.

It was that kind of casual harmonizing-for-fun around the battery area that eventually led to the two being in demand for performances of the &#8220;The Star-Spangled Banner&#8221; at change-of-command ceremonies and other official functions.

Their first gig came last January, when their battery commander wanted someone to sing the anthem at his upcoming change-of-command, Henderson said.

It hasn&#8217;t stopped. A few months ago they sang at the grand opening of a new food court on base and helped launch KATUSA Week, which honors South Korean soldiers assigned to the U.S. Army. Last month there were two ceremonies: one for their battalion commander, the other for the brigade sergeant major.

On July 15, the duo boarded a bus along with others from their unit for an early morning trip from Kwangju to their brigade&#8217;s headquarters at Osan Air Base in Pyongtaek, where the unit was changing brigade commanders.

But even this they were careful not to hold too long.

Henderson and Molden got to know each other when both arrived at the battery in November. Henderson joined the Army in 1991 and has an administrative job in the battery motor pool. Molden, who joined in 2002, is a missile launcher operator.

Both have long backgrounds in church and school choirs and have an easy instinct for making a cappella harmony come out right.