Soldiers can now roll up sleeves along with other servicemembers 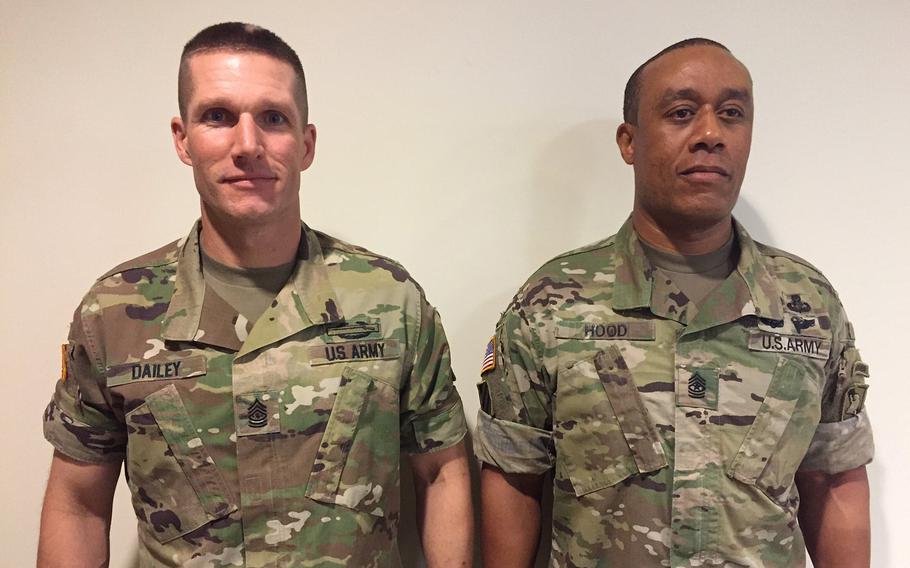 Sgt. Maj. of the Army Daniel Dailey, left, and Command Sgt. Maj. Stanley Hood show rolled-up sleeves - Dailey with camouflage rolled out, Hood with it in. Army chief of staff Gen. Mark Milley sent out a tweet asking soldiers which version they liked better. Milley has decided to allow soldiers to roll their sleeves. (U.S. Army)

Soldiers across the Army are now permitted to roll up their sleeves, just as Marines, sailors and airmen do.

A memorandum on the policy change says that commanders may immediately authorize rolled sleeves for soldiers wearing the Army Combat Uniform in the Universal Camouflage Pattern, Operational Camouflage Pattern or Operation Enduring Freedom Camouflage Pattern. Sleeves will be rolled neatly with the camo facing out no more than 3 inches above the elbow; sleeves may be down and cuffed during field training exercises, according to the memorandum.

Soldiers haven’t been allowed to roll their sleeves since the Battle Dress Uniform was replaced in 2005.

“When you can change a thing that doesn’t break good order and discipline and that soldiers like, let’s do it,” Sergeant Major of the Army Dan Dailey said in an interview with The Washington Post. “We’re the only service that doesn’t do it, and we used to. So it’s not one of those things that if we do, we can’t survive. Because we’ve done it before and we know it’s not going to hurt anybody.”