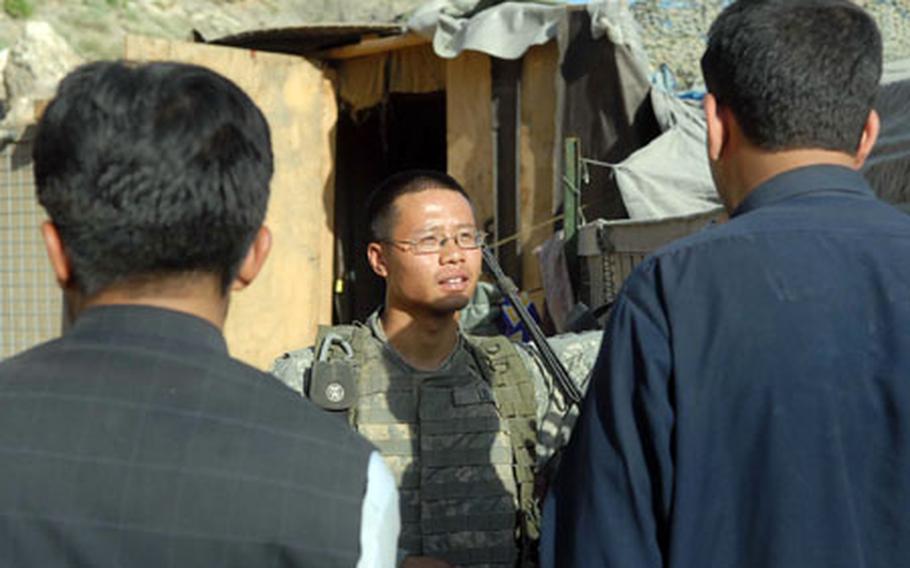 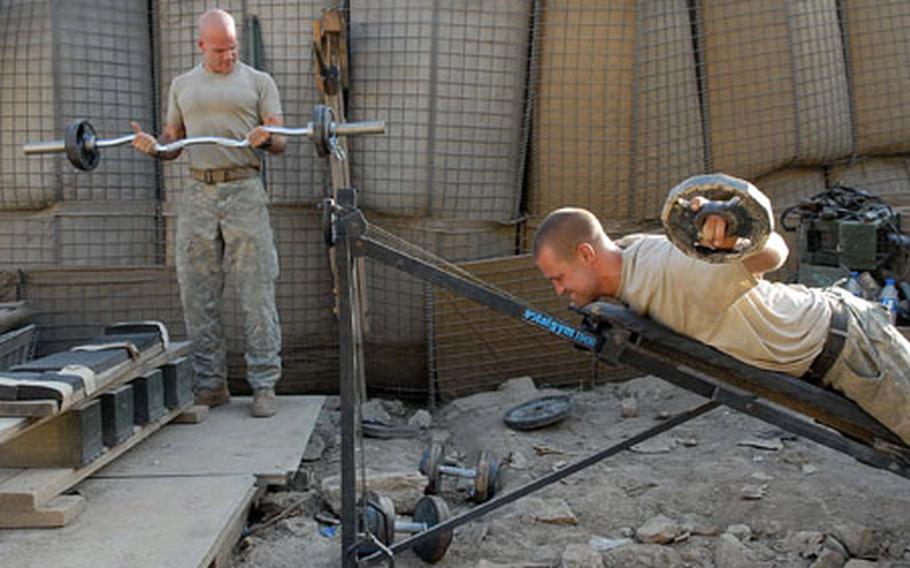 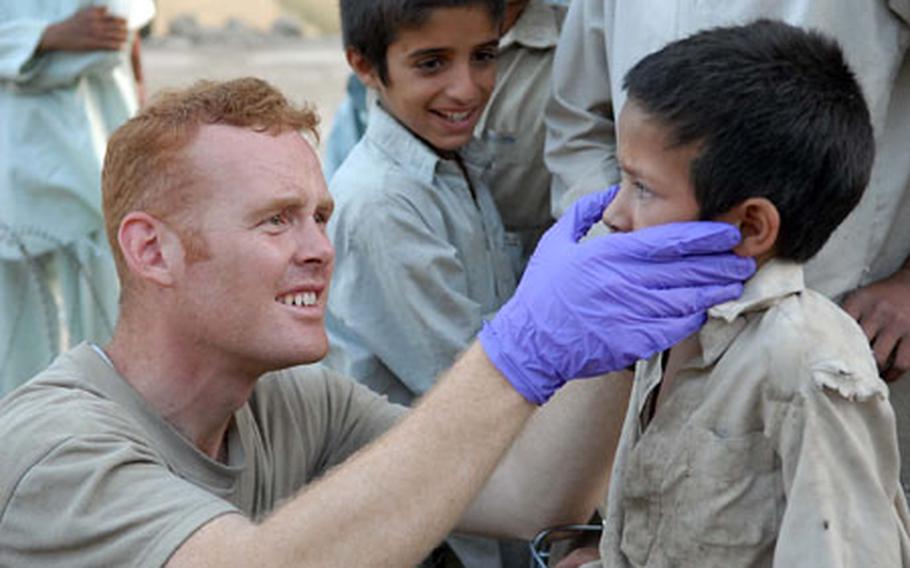 Spc. Justin Forth, 3rd Platoon, Company C, 1st Battalion, 32nd Infantry Regiment, 10th Mountain Division, gives some first aid to a local boy who showed up at the Fire Base Florida gate with cut on his cheek. (Michael Abrams / S&S) 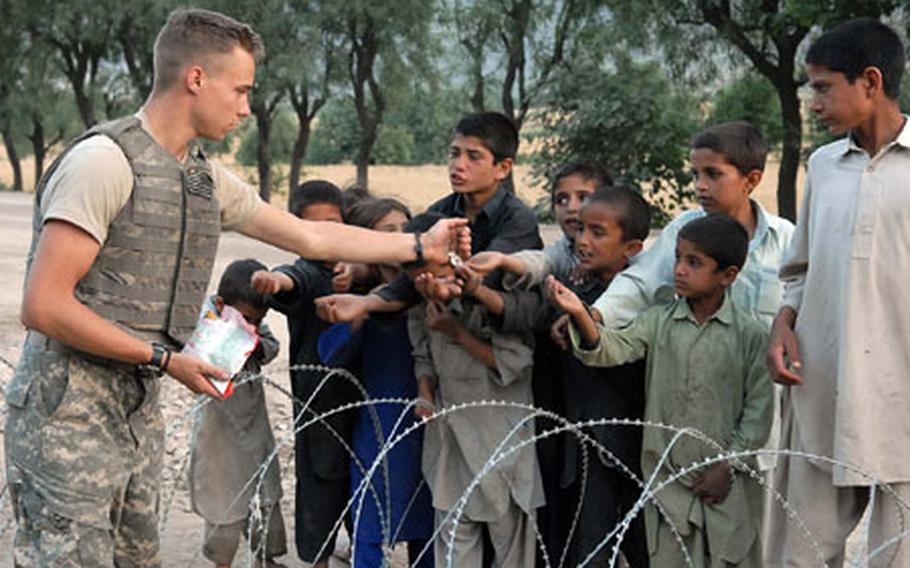 Pfc. John McConnell, 3rd Platoon, Company C, 1st Battalion, 32nd Infantry Regiment, 10th Mountain Division, hands out pumpkin seeds to local children at the gate of Fire Base Florida. The soldiers of 3rd Platoon have mostly a good working relationship with the locals along their stretch of the Pech valley. (Michael Abrams / S&S) 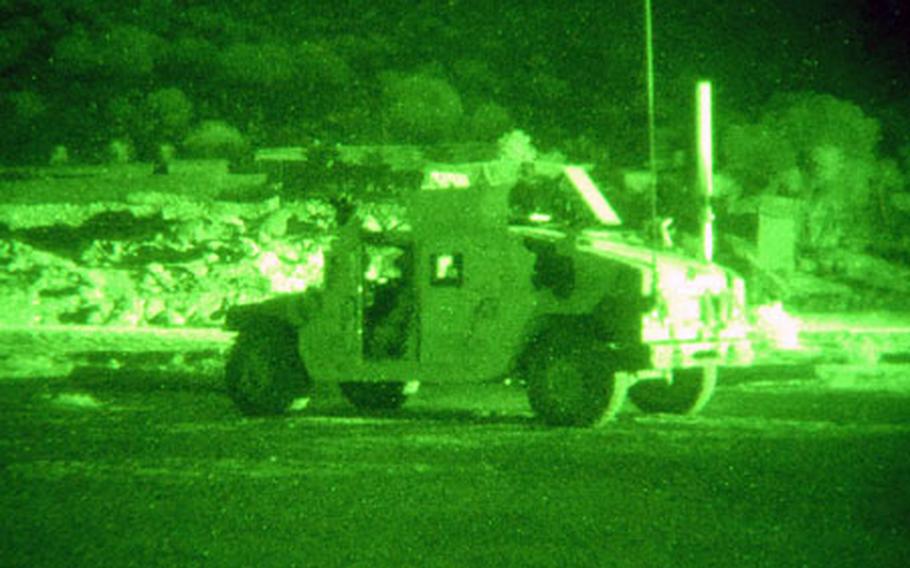 It&#8217;s a dusty, critter-crawling, boulder-strewn speck of a place just north of Asadabad on the Pech River Road in Kunar province. Long a perilous path, the road has become far less so since the boys of Company C, 1st Battalion, 32nd Infantry Regiment, 10th Mountain Division arrived a year ago.

&#8220;The Marines primarily drove only at night,&#8221; Capt. Robert Stanton, the company commander, said of the preceding force.

Stanton&#8217;s gang took over just after Operation Mountain Lion wound down late last spring. The plan was to establish &#8220;a bubble of security&#8221; along the road and then push deeper into more remote areas, the captain said, and the only way to effectively do that was to stick around &#8212; day and night.

For the first few months, the soldiers, when they weren&#8217;t patrolling or sipping tea with local leaders, lived out of their Humvees. Aside from protective barriers, there wasn&#8217;t much to the fire bases, as they are known.

The 3rd Platoon established its camp about seven miles north of Asadabad and named it Fire Base Florida. It is the first of a string of camps running west-northwest along the river road to Camp Blessing.

By the time the advance team rolled up to 3rd Platoon&#8217;s camp earlier this year, 1st Lt. Tim Lo and his men, with local help, had built several makeshift structures. Most have nicknames, such as Thunderdome, Castle, Bat Cave and Mine Shaft. The latest creation is simply called The New Place.

McConnell and the rest of 3rd Platoon are about as hardy as they come in Afghanistan. It took a few weeks to acclimate themselves to the altitude and hills, but now, after spending more than a year here, they bound up and down hills with relative ease.

But many, including McConnell, are squeamish when it comes to spiders. The list of undesirables ranges from lizards and scorpions to, supposedly, jackals and mountain lions.

A couple of the soldiers claim to have heard local livestock shriek in agony in the dead of night while being mauled by a predator.

Whenever McConnell retires for the evening, he usually scouts out his quarters to ensure no eight-legged creatures are lurking about.

A different kind of patrol occurs a few hours later, when several soldiers head out on a night watch. Militants like to lay roadside bombs after dark, so patrols of this nature are intended to prevent that.

On this night, the only significant action is a work crew improving the unpaved river road. Equipped with night-vision goggles, soldiers scan the road, hills and ridge lines for any mischief. Nothing appears out of the ordinary and, over time, talk turns to home and the near future.

Staff Sgt. Clint Brubeck, born in Africa to a pair of missionaries, enlisted in the Marine Corps several years back. After his enlistment, he returned to the civilian world but found it unfulfilling, so he joined the Army.

Safely back at camp, the night watchmen shuffle back to their dens to grab a few hours of shut-eye. A couple of them opt for a late, late night snack before turning in. Off in the distance, a melodic voice from a nearby mosque begins to arouse the faithful for the predawn prayer.

A pancake breakfast is followed by a pot of coffee brewed by Spc. Dan Bowen. Some in the platoon refer to him as &#8220;Mr. International&#8221; because of his globe-trotting ways. At 21, he already has been to China, Russia and much of western Europe.

Lo, the commander of 3rd Platoon, samples some of Bowen&#8217;s brew as he prepares for a meeting with the Wotapor District police chief. Lo took over the platoon last June, four days after its previous commander, 1st Lt. Forrest Ewens, died along with another soldier in a bomb attack. Lo described his predecessor as quiet, religious and a man of strong morals.

An hour later, Lo and several of his men walk up to their dust-laden Humvees and prepare to leave. Already a gaggle of kids has congregated on the other side of the concertina wire, as they always do.

Joining Lo will be the new local Afghan army commander. He and his men live alongside the Americans, but in a newly built barracks building that has heat in the winter and air conditioning in the summer. They also stay dry when it rains, something that can&#8217;t always be said about Lo&#8217;s men.

Before they drive off, everyone is alerted to a report of possible suicide bombers in their midst.

At the district police headquarters, Afghan army Lt. Fakarudin &#8212; he only goes by one name, which is fairly common in Afghanistan &#8212; meets Jangi Habibullah, the police chief. Also new on the scene is the U.S. Army trainer attached to this Afghan National Army unit. Built like a rock, modest, but always alert, he introduces himself to the principals as Sergeant G.

They meet outside under a leafy trestle, sip sweet tea, and chat about their needs and wants. Asked what he desires most, Habibullah lists fuel, heavy weapons and ammunition. He also would like to resolve the issue of back pay for his men, something Lo promises is being sorted out.

Lo tells Fakarudin and Sergeant G this is the best district police force in the province.

Soon afterward, everyone, including Habibullah and some of his men, take the newcomers to the most strategic road checkpoint in the Pech River Valley. Situated just west of Shaigai village, the checkpoint affords the local police force a long and clear view of anything coming their way.

Again, the issue turns to guns, gear and greenbacks. Lo assures the checkpoint commander that U.S. and Afghan officials are working through these issues. He reminds everybody just how much progress has been made in the past year, and says his commanders have their priorities straight.