Soldiers at Yusafiyah see it all go up in smoke 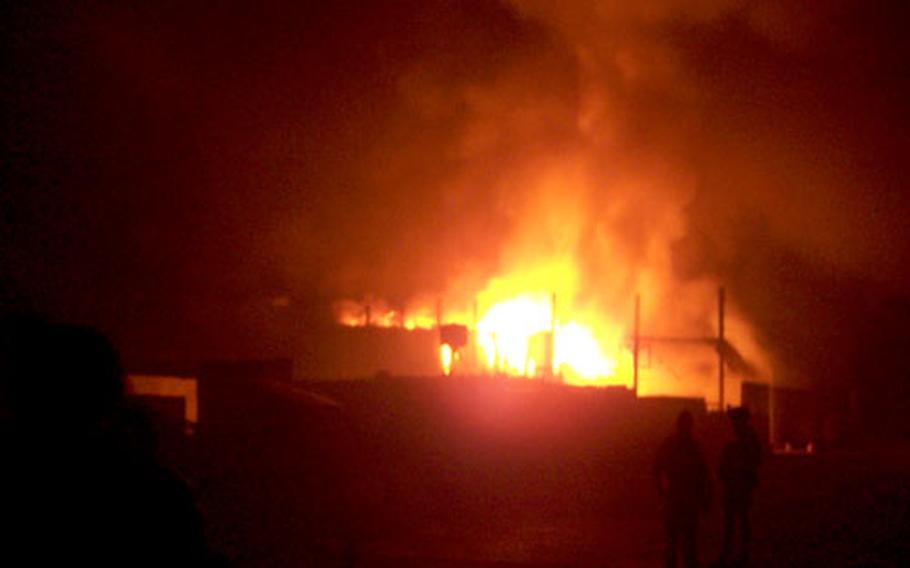 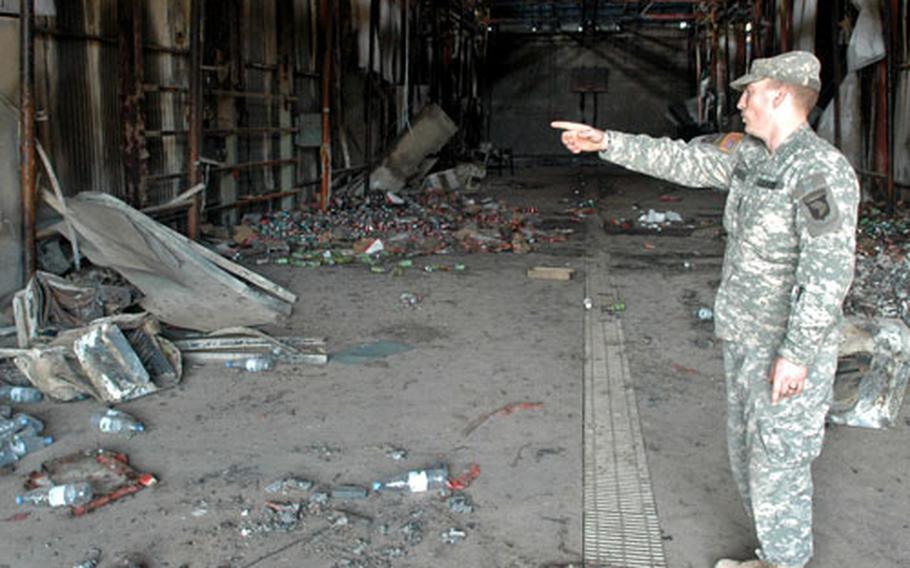 Sgt. Nathan Loper shows where his company kept its headquarters and barracks until an electrical fire on Feb. 5 destroyed the building. (Ryan Crosby / U.S. Army) YUSAFIYAH, Iraq &#8212; It was shortly before dawn when 2nd Lt. David Halpern woke up and realized his forward operating base was burning down.

An entire company of soldiers stood and watched as plumes of black smoke engulfed the defunct potato factory that served as their Spartan living quarters at the far-flung base here about 25 miles south of Baghdad.

Within moments, ammunition stored inside the building began to pop and crackle as rounds of 5.56 mm ammunition burned up, grenades exploded and at least one AT-4 rocket shot through the smoldering roof.

No one was injured in the blaze, which soldiers believed was caused by faulty electrical wiring. But here in a deadly region known as &#8220;the Triangle of Death,&#8221; the fire was just the latest hardship to befall the soldiers from Company B, 1st Battalion, 502nd Infantry Regiment.

In an area where catastrophic roadside bombs and mortar fire are seen nearly every day, the 140 soldiers with the Fort Campbell, Ky.-based unit of the 101st Airborne Division have seen six soldiers killed in action and more than 20 wounded since arriving in November.

&#8220;We thought: what else can go wrong? But then I thought, &#8216;I don&#8217;t really want to ask that question,&#8221; said Capt. John Goodwin, a Wisconsin native and the company commander. Indeed, about two hours after the fire, six mortar rounds rained down on the small camp, damaging a portable toilet and the windshield of a helicopter.

The fire has proved a test of resiliency for many soldiers who have watched friends die and faced harrowing brushes with danger as a daily part of their job.

At the time of the fire, Goodwin and another platoon were at nearby FOB Mahmudiyah for a memorial service for another Bravo Company soldier, Spc. Anthony Owens, a 20-year-old from Conway, S.C., who died from a gunshot wound on Feb. 1.

It&#8217;s been a fast-paced and stressful deployment for the soldiers. They often spend days at a time living at fortified traffic checkpoints, sleeping in their trucks or fending off attacks along the dangerous roads leading from the Euphrates River into Baghdad&#8217;s city center.

The FOB &#8212; a blighted complex of large, steel-walled warehouses &#8212; was their only place for rest. They had spent hours erecting wooden lofts and walling off rooms to make the barren structure more comfortable.

&#8220;It was like your one place where you could come and get away from everything in Iraq &#8212; and it burned down,&#8221; said Spc. Paul Cortez from California, with a tone of disbelief.

In the hours after the fire, officers set up a temporary operations center in a Humvee, using the truck&#8217;s radio to communicate with the battalion headquarters a few miles away.

By nightfall, commanders replaced the unit&#8217;s radio and satellite equipment and Company B set up a new Tactical Operations Center, or TOC, in what was a storage area of the dining facility.

About 35 soldiers fled the burning building without the body armor and were later evacuated to Camp Stryker in Baghdad to receive new protective gear.

After arranging for new ammunition and other personal gear, Lt. Col. Thomas Kunk, the battalion commander, made a trip to the PX at Camp Stryker to provide new toiletries, towels and socks to ease the soldiers&#8217; loss.

That night, the soldiers set up cots in part of a building occupied by the local Iraqi Army unit, a cramped and unheated space where they have spent the past two weeks.

Soon after the shock, however, humor reappeared as a part of the soldiers&#8217; daily life.

Spc. Anthony Hernandez said his biggest disappointment was losing the digital photos of his good friend, 32-year-old Sgt. Kenith Casica, who was killed in December.

Nevertheless, many are reluctant to complain too much.