Soldiers are filling many different jobs at Camp Taji 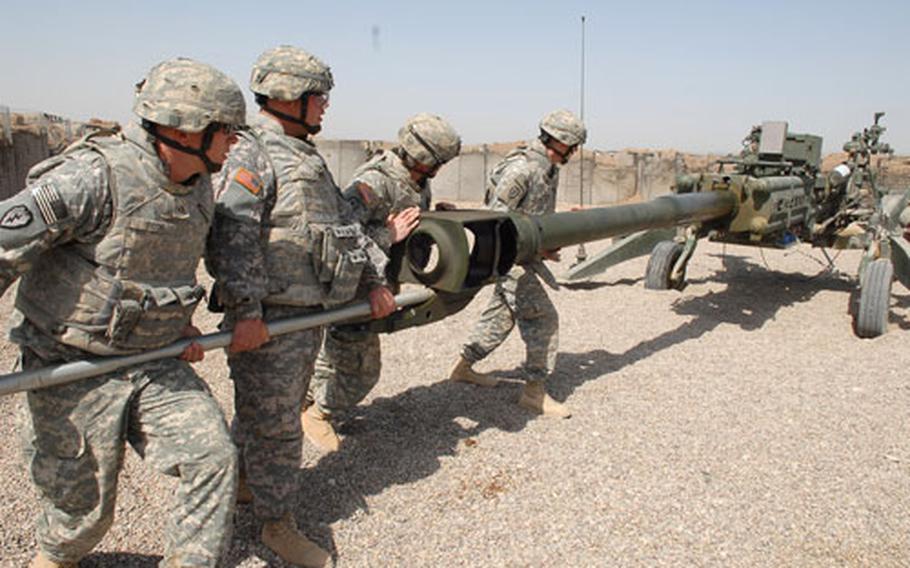 Soldiers with 2nd Battalion, 11th Artillery Regiment move a M-777 howitzer at Camp Taji, Iraq, during a firing drill that required them to re-orient the cannon. Artillerymen have been spending less time handling guns like this as they&#39;ve taken on more unrelated jobs. (James Warden / S&S)

Soldiers with 2nd Battalion, 11th Artillery Regiment move a M-777 howitzer at Camp Taji, Iraq, during a firing drill that required them to re-orient the cannon. Artillerymen have been spending less time handling guns like this as they&#39;ve taken on more unrelated jobs. (James Warden / S&S) 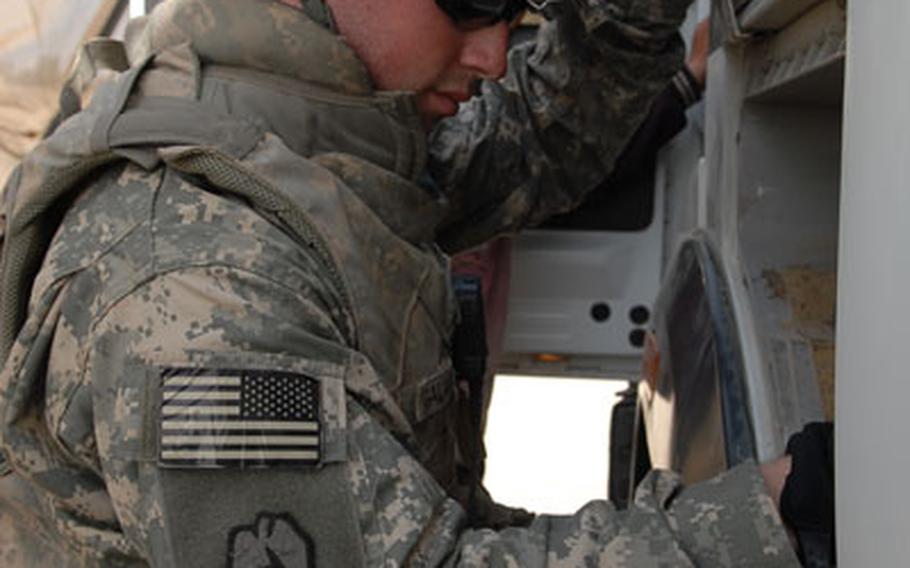 Pfc. Gregory Galarneau, 20, of San Antonio, Texas, checks inside a compartment on a civilian truck entering Camp Taji, Iraq, on Saturday. While the job is not directly related to Galarneau&#39;s official job as an artilleryman, he said he&#39;s enjoying how this new job lets him interact with Iraqi citizens. (James Warden / S&S)

TAJI, Iraq &#8212; There&#8217;s a small square in a corner of Camp Taji where America&#8217;s newest cannons await the order to fire. Soldiers with the 2nd Battalion, 11th Artillery Regiment stay by these guns 24 hours a day, ready to support units closer to the front. When they at last move into action, they do so with a fluidity and grace that can only come from months of training on these howitzers.

Gunner&#8217;s Gate sits in the southwest corner of Camp Taji. About 90 percent of all civilian traffic that enters the base passes through this gate &#8212; in all, about 250 people and 100 vehicles daily. All must undergo extensive security checks to get inside. A truck making a delivery to the base, for example, is inspected and X-rayed. The driver himself is then searched.

The American soldiers manning these guard towers, checking the trucks and running the X-ray machines are all 2nd Battalion artillerymen, although they have help from a handful of Macedonian soldiers and several private contractors from Africa. The gunners form the meeting point between the base and the community that surrounds it.

A helium-filled blimp floats in the skies above Taji. A camera beneath it keeps constant watch over the base and surrounding areas several miles out. Eight hundred feet below, the artillerymen who operate the blimp work in a small room. They take turns operating the camera and work together to manhandle the massive balloon into its holder when the weather turns bad.

Taji&#8217;s PX is in a centrally located part of the base. Here patrolling soldiers check the IDs of civilian workers to make sure they have permission to be there. Later these soldiers head to check a local DVD store called Sam&#8217;s. They stroll through the store to make sure it isn&#8217;t selling contraband like drugs and alcohol.

While Taji has a regular security force, these artillerymen conduct their own patrols around the base as part of 2-11&#8217;s mission to defend the base.

Artillerymen are military police, too.

All over Taji and the rest of Iraq, artillerymen are filling in at jobs that don&#8217;t have anything to do with the cannons they&#8217;re most closely associated with. War has changed and so have they.

Artillerymen, it turns out, have many occupations.

An evolving role in wars created the &#8216;infantillary&#8217;Lt. Col. Joe Gleichenhaus, commander of 2nd Battalion, 11th Artillery Regiment, traces the diversification of an artilleryman&#8217;s role back to when the military was still preparing for traditional war.

Back then, fire support officers embedded in brigades and battalions were already supervising a mishmash of soldiers &#8212; including civil affairs, psychological operations and Air Force liaisons &#8212; whose jobs didn&#8217;t fall cleanly in any one section.

That role grew as the Army put less emphasis on large barrages and more emphasis on nation-building, an emphasis reinforced by the Balkan deployments in the 1990s.

The association between artillery and the civil affairs role became so close that soldiers came to call this part of the job &#8220;non-lethal targeting.&#8221;

Fire support officers go so far as to draw up these non-lethal missions in the same format as they do the lethal variety. An order to deliver supplies to a school, for example, may list the time, place, method and purpose just like a mission that sends thousands of tons of high explosives at an enemy tank formation.

At the same time, the wars that America was fighting required fewer cannons. So leaders naturally turned to artillery units when the Army needed more soldiers to fill other roles. These new tasks then landed on a branch that was already accustomed to &#8212; if not exactly welcoming &#8212; roles outside its primary focus.

The result is a variety of jobs that would fit in just about every branch of the Army, a mission set Gleichenhaus compares to a pentathlon, although others have dubbed it &#8220;infantillery.&#8221;