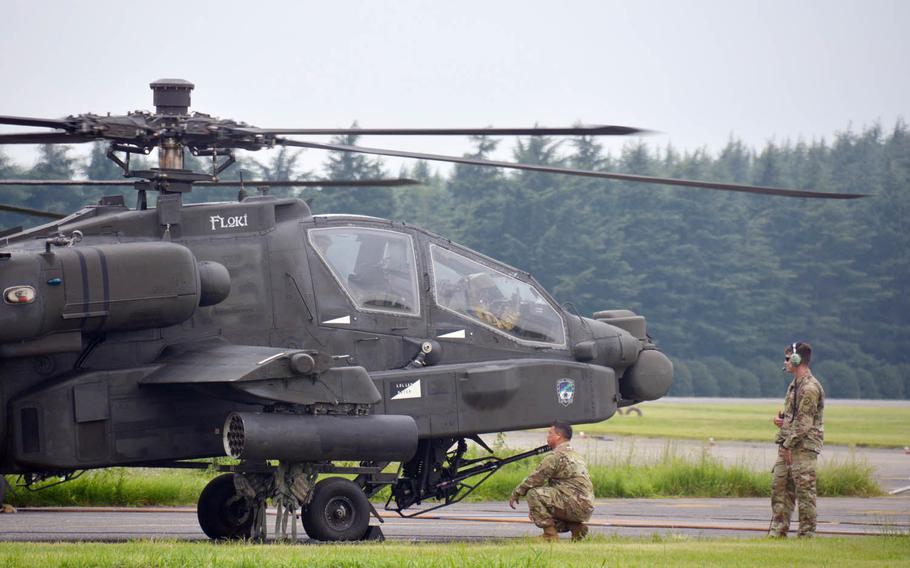 YOKOTA AIR BASE, Japan — Six hundred Alaska-based soldiers along with AH-64 Apache and UH-60 Black Hawk helicopters are in Japan for annual drills amid tension over North Korea’s nuclear and missile programs.

The troops, including three infantry companies and support personnel and the aircraft, will train alongside Japanese soldiers from the 34th Infantry Regiment at East Fuji Maneuver Area, Bowen said.

During the drills, the attack helicopters will maneuver with ground troops and conduct live-fire training directly alongside them, Warrant Officer 2 John McCormick — a 1st Battalion, 25th Aviation Regiment Apache pilot — said in a phone interview from Camp Fuji on Thursday.

The aviators haven’t given a lot of thought to North Korea’s recent provocations, including firing a missile over Japan last month and testing a nuclear bomb Sept. 3, the 37-year-old Fort Lauderdale, Fla.-native said.

“We’re just focused on the mission at hand and making sure we are ready for anything,” McCormick said.

A key part of the training for the aviators will be learning to work seamlessly with the Japanese, who will bring their AH-1 Cobra and UH-1 Iroquois helicopters, he said.

“We’re going to try to support these guys as best we can,” added an-other Apache pilot, 1st Lt. Andrea Bagley, 25, of Thomasville, Ala.