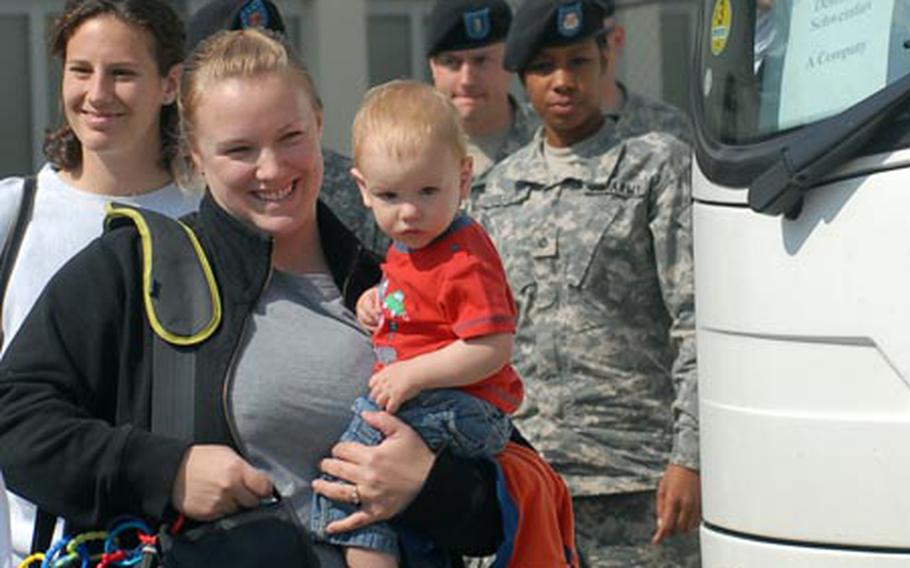 Lisa Huerth, holding her son Lochlan, 13 months, smiles upon arrival at Ledward Barracks in Schweinfurt, Germany, Wednesday for a tour of the community and the city of Schweinfurt. (Dan Blottenberger / S&S)

SCHWEINFURT, Germany &#8212; The sound of construction equipment hammered away at Ledward Barracks as four buses packed with soldiers and family members from Mannheim arrived Wednesday for a tour of their future home.

More than 140 soldiers and family members of the 44th Expeditionary Signal Battalion were touring the base and the city to help prepare for their move, set for July and August. The bulk of the unit returned from Iraq in January.

Announced by U.S. Army Europe in August 2008, the move will bring the entire 7th Tactical Theater Signal Brigade from Mannheim to Schweinfurt.

The brigade headquarters will move to Schweinfurt after the troops return from their Iraq deployment in spring of 2010, said Leanne MacAllister, a spokeswoman for U.S. Army Garrison Mannheim.

First Lt. Mike Marnnan, the executive officer for the battalion&#8217;s Company B, said he found out about the move in November &#8212; a month before he returned from Iraq.

"It is just another mission for us," Marnnan said. And, he added, it&#8217;s better to move from one German city to another than have to go downrange.

Others were in the throes of handling yet another change of station.

"My wife was overwhelmed," said 1st Lt. David Hill, who was among a small group of soldiers who left Mannheim early to prepare for the arrival of the main body of soldiers. For the past few weeks Hill found himself driving back and forth to Mannheim preparing for the move with his wife.

The Department of Defense has not yet released any definitive information on when the base in Mannheim is set to close, but USAREUR spokesman Bruce Anderson noted that it is not among the bases set to "endure" as the Army downsizes in Europe.

According to a 2008 USAREUR release, Mannheim would lose about 1,100 soldiers, 265 civilians, 2,000 family members and 73 local national positions.

Schweinfurt will gain about 950 soldiers, six civilians and about 1,400 family members. The community has a 12,000 personnel, 2,500 of whom are currently deployed, said Mark Heeter, a public affairs spokesman for USAG Schweinfurt.

Units that will be part of the increase are the 15th Engineer Battalion, which formed in July 2008 and has since been filling its ranks, the 522nd Military Police Augmentation Platoon, and the 7th Signal Brigade.

Most of the families who took Wednesday&#8217;s tour, which was organized by the base&#8217;s Morale, Welfare, and Recreation program, said it helped them know what to expect.

"We are used to moving, so it wasn&#8217;t a big deal for us, really," said Lisa Huerth, who arrived with her 13-month old son Lochlan and husband, 1st Lt. Will Huerth.

Several improvements are being made to buildings that will house the battalion. The buildings formerly housed the 172nd Infantry Brigade, which moved to Grafenw&#246;hr in October of 2008.