Soldier wounded in Iraq is rewarded with U.S. citizenship 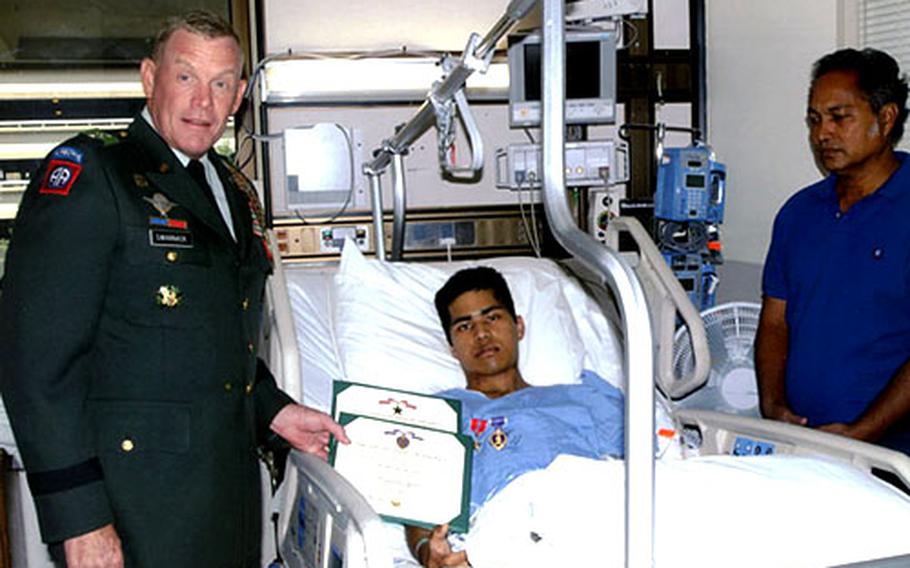 WASHINGTON &#8212; Army Spc. Hilario Bermanis was maimed in service to the United States, and a grateful nation made him one of us.

Veterans Affairs Secretary Anthony Principi took part in a ceremony Wednesday making Bermanis, of the 82nd Airborne Division, a U.S. citizen. Bermanis also is a citizen of the Federated States of Micronesia.

&#8220;This young soldier serves as a true example of sacrifice to a nation that today he can call his own,&#8221; Principi was quoted as saying in a VA news release. &#8220;He gave of himself so that others could have a better tomorrow. The Department of Veterans Affairs will be there for Spc. Bermanis and thousands of other brave men and women returning home from harm&#8217;s way.&#8221;

Bermanis lost both legs and his left hand during an attack June 10 in Baghdad while he and a fellow soldier, who was killed instantly, were guarding a weapons turn-in point. Bermanis was evacuated to Germany and then transferred to Walter Reed.

He was awarded the Bronze Star for his conduct in action and a Purple Heart for his injuries.

Bermanis enlisted in the Army three years ago. His parents and 5-year-old brother attended the ceremony at Walter Reed Army Medical Center along with Secretary Principi; Secretary Tom Ridge of the Department of Homeland Security; and Peter Christian, speaker of the Micronesian Congress.

On July 3, 2002, President Bush issued Executive Order 13269 providing naturalization for aliens and noncitizen nationals serving on active duty in the U.S. armed forces during Operation Enduring Freedom, from September 11, 2001, to a date not yet determined.

September 17 was designated Citizenship Day in 1952 by President Harry Truman. The anniversary was established to focus on the rights and responsibilities of U.S. citizens, both native-born and naturalized.