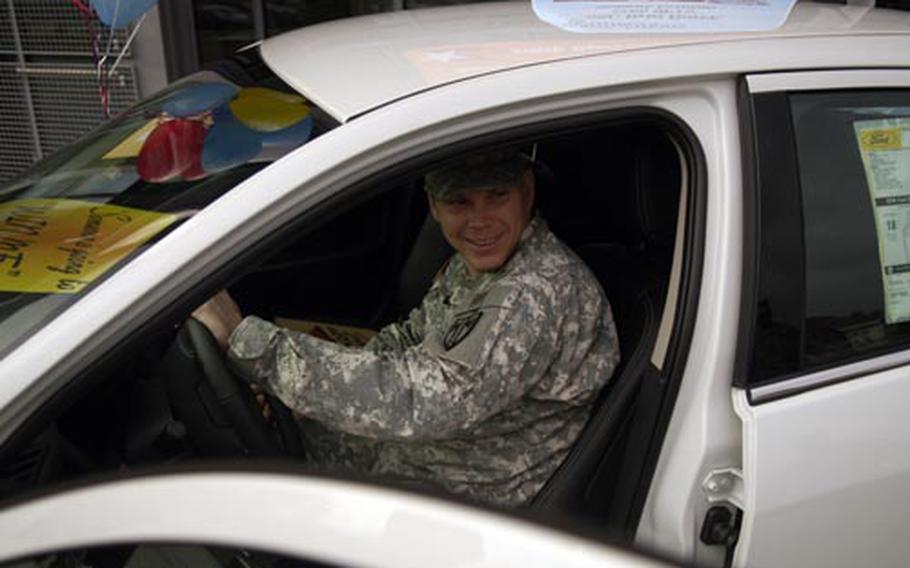 Staff Sgt. Britt Boyer of the 554th Military Police Company in Stuttgart, Germany, starts his new Ford Fusion, which he received in an Army and Air Force Exchange Service and Pizza Hut promotion. The car was given as a surprise to Boyer, who will be deploying to Afghanistan this spring. (John Vandiver / S&S)

STUTTGART, Germany &#8212; The soldiers from the 554th Military Police Company filed into the food court Tuesday afternoon, looking businesslike and ready to chow down.

The unit, scheduled to deploy for Afghanistan this spring, was told they were getting a free pre-deployment pizza party from the local Pizza Hut at Panzer Kaserne, which wanted to show its appreciation for the MPs&#8217; regular patronage.

But the party was just a ruse.

The target for the schemers from Army and Air Force Exchange Service and Pizza Hut was an unsuspecting noncommissioned officer from the MP outfit. The party was just a ploy to get him on the scene.

Staff Sgt. Britt Boyer seemed oblivious as he sat down with his fellow soldiers, who were surrounded by marketing-type people decked out in Pizza Hut attire and looking all geared up to do some promoting.

Also standing around were people taking pictures and an American Forces Network cameraman documenting the whole thing: Soldiers eating pizza. It all looked a little over the top, but no one seemed to care or even notice the brand new Ford Fusion sitting outside with balloons on it.

Then Boyer was called forward to receive a special prize for being Pizza Hut&#8217;s most loyal and frequent customer.

"Here&#8217;s your own personalized pan pizza," said the Pizza Hut worker, presenting the soldier with a little pizza box. "Open it."

But rather than a greasy pizza, the box held a set of car keys. As Boyer turned his head to look out the window where the shiny white car sat parked, he put two and two together. Then came the whoops and cheers from troops.

"I didn&#8217;t suspect anything," said Boyer, dumbfounded by the giveaway. He had filled out an entry form as part of a promotion, but that was months ago.

As he inspected his new car, Boyer made a call to share the news with his disbelieving wife, Teresa.