Soldier who volunteered for Afghan tour wounded in firefight 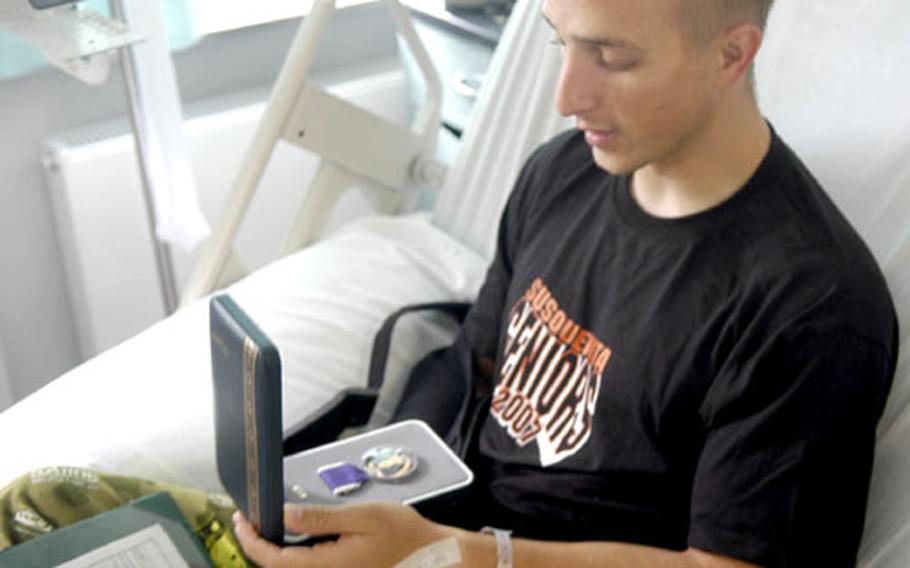 Pfc. Gregory Simms was presented with the Purple Heart on Friday while recuperating at Landstuhl Regional Medical Center in Germany. (John Vandiver / S&S)

BAUMHOLDER, Germany &#8212; The nurses drop by to check on him, delivering relief for the pain. Others drop by just to talk.

Simms, a soldier with the 1st Battalion, 35th Armor Regiment out of Baumholder, arrived last week at Landstuhl where he is being treated for injuries suffered in a firefight days earlier in Afghanistan.

&#8220;I just remember looking at my palm. It was all bloody and mangled. My right ring finger was blown off. It was just hanging from a piece of skin,&#8221; said Simms, who volunteered to deploy in July with Company A, 1st Battalion, 4th Infantry Regiment out of Hohenfels.

&#8220;They needed mortar men,&#8221; said Simms, who was slated to serve a six-month tour in Afghanistan and then return to Baumholder.

On Friday, a steady stream of 1st Armored Division, 2nd Brigade soldiers dropped by to visit with Simms, who was presented with the Purple Heart by his battalion commander.

Simms, who was among a small group of Baumholder soldiers deployed to provide support in Afghanistan, said despite losing a finger, he will retain use of his right hand.

He was working an early morning guard shift with another soldier when the fighting started. He saw a flash from &#8220;Machine Gun Hill,&#8221; an area about 900 meters in the distance and a known launching point for small-arms attacks. Almost simultaneously, fire started from a second location, about 300 meters away in an area dubbed &#8220;The Orchard.&#8221;

He and another soldier tried to shoot back but faced an onslaught. Soon, other soldiers were roused from their sleep and began charging to the guard area to provide support.

Simms was hurt when a shot came rattling inside the tower. Another soldier was hit at the same time.

Another soldier was hit during the escape, Simms said, but one was killed during the fighting.

Simms, raised on a farm in northern Michigan, said losing a finger is certainly better than losing life or limb. But having any part of your body blown off, even a small part, works on the emotions, he said.

Now, Simms says he&#8217;s eager to get well, complete his rehabilitation, and get back with the soldiers of 1-35.