Soldier who led brigade in assault on Baghdad promoted 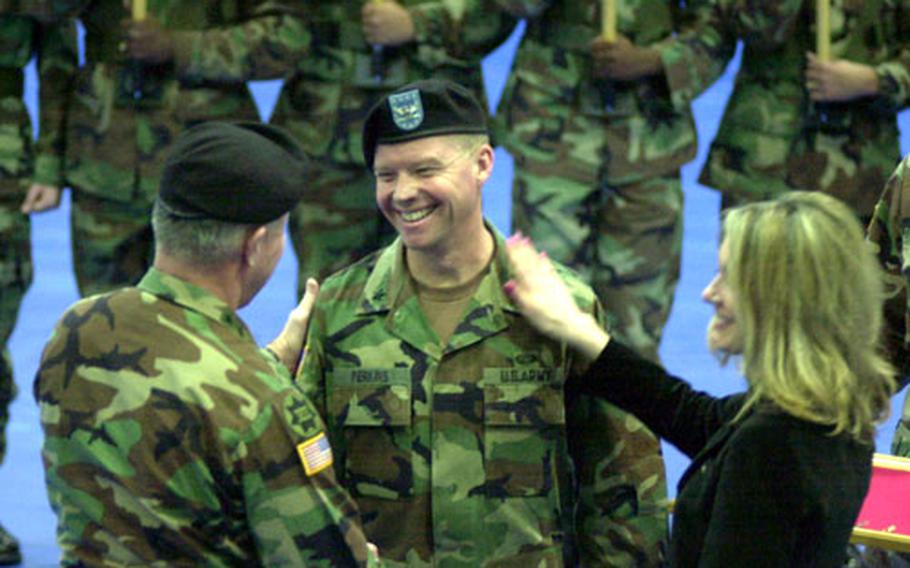 Perkins&#8217; exploits &#8212; riding in his M113 Armored Personnel Carrier at breakneck speed across the Iraqi desert from Kuwait in March 2003, then leading an armored assault on Baghdad &#8212; were captured by numerous media outlets.

&#8220;You probably watched him on CNN,&#8221; McKiernan told those gathered at the ceremony. &#8220;This brigade combat team leader led a very tough fight. We will use his experience for years to come as he mentors young leaders in his profession.&#8221;

After pinning on his stars, Perkins said he would never forget the sacrifices of his soldiers who never made it home from Iraq. His brigade suffered 120 casualties during the Iraq invasion, including eight soldiers killed in action, said Perkins. He was awarded the Silver Star for his Iraq service.

&#8220;Many soldiers paid the ultimate price conducting combat operations in Iraq so their units were successful. Soldiers and noncommissioned officers stepped into the line of fire ... so their units would be successful,&#8221; he said.

The 48-year-old Keene, N.H., native said the biggest lesson he learned in Iraq was that soldiers fight as they train.

&#8220;Things we train soldiers to do &#8212; they will instinctively do that in combat. We need to give soldiers as realistic and demanding training as possible so that when they go into combat it becomes second nature,&#8221; he said.

Perkins leads a training center that he said is growing to become the hub of the transformation going on at U.S. Army Europe.

&#8220;It represents a new way of doing business for us. We are becoming more lethal and more deployable,&#8221; he said.

McKiernan praised Perkins for his work to date at the center, training soldiers deploying to Iraq, Afghanistan and the Balkans.

&#8220;As the U.S. Army in Europe transforms and changes the basic organizational footprint of what it looks like the crown jewel will be the JMTC,&#8221; he said.