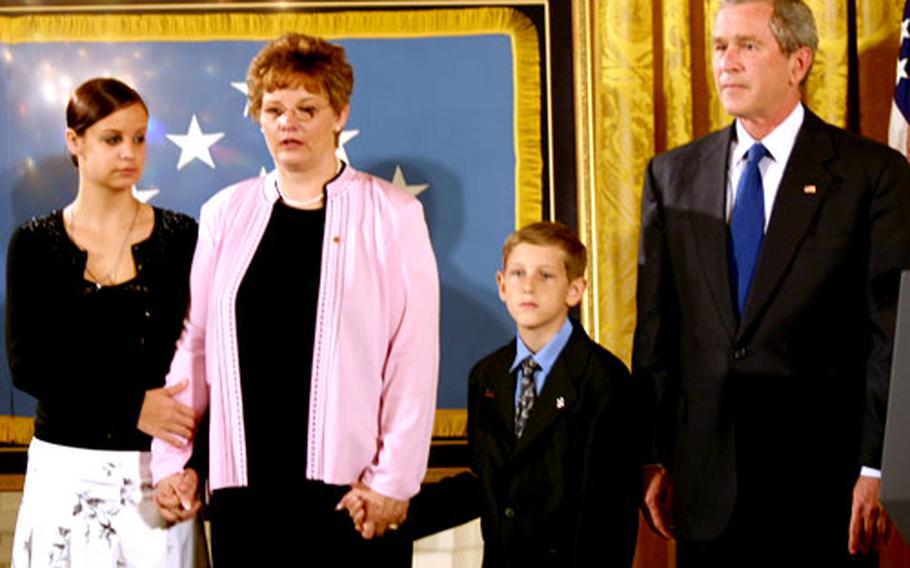 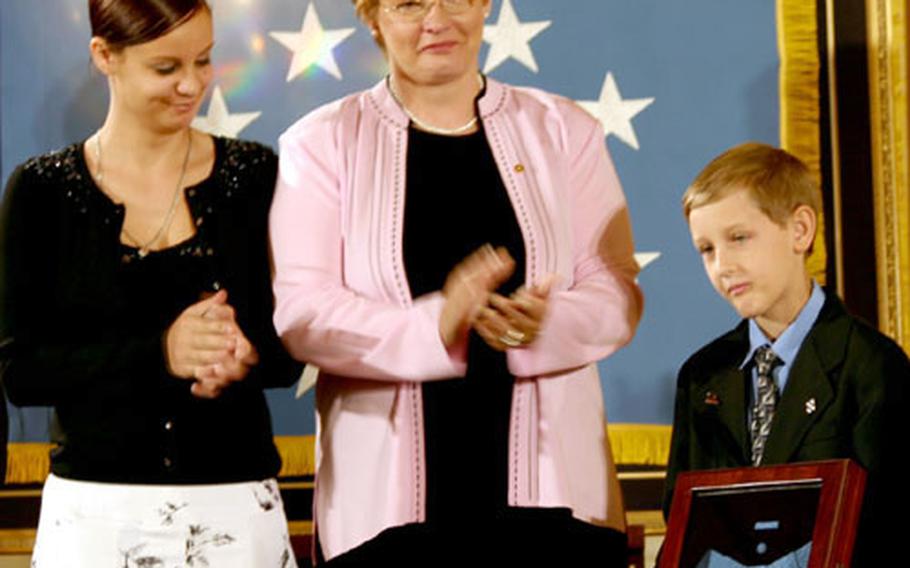 Eleven-year-old David Smith is applauded by mom Birgit and sister Jessica after he accepted his father&#39;s Medal of Honor from President Bush Monday at the White House. (Joe Gromelski / S&S) President Bush speaks at Monday&#39;s White House ceremony at which Sgt. 1st Class Paul Ray Smith was posthumously awarded the Medal of Honor. At left is the new Medal of Honor flag, which will be presented to all future recipients of the nation&#39;s highest military award. (Joe Gromelski / S&S)

WASHINGTON &#8212; Two years to the day after Sgt. 1st Class Paul Ray Smith fought and died on a dusty road outside Baghdad, President Bush handed the soldier&#8217;s 11-year-old son a glass-encased Medal of Honor in the name of Congress and the nation.

In the East Room of the White House, with the imposing portraits of Washington and Theodore Roosevelt looking on, Bush handed Smith&#8217;s family what he described as the &#8220;first Medal of Honor in the war on terror.&#8221;

Smith, who is credited with rallying the defense of his platoon in the face of a near-overwhelming counterattack by Iraqi forces after the 3rd Infantry Division seized Saddam International Airport, is the first person to be awarded the country&#8217;s highest award for valor since the wars in Iraq and Afghanistan began.

In fact, only two Medals of Honor have been awarded since Vietnam. Both were given to Delta Force operators &#8212; Master Sgt. Gary I. Gordon and Sgt. 1st Class Randall D. Shughart &#8212; after the pair were killed trying to save downed aviators in Somalia in 1993. Nearly half of all who have received the award have died earning it.

With the Pentagon brass in attendance, alongside congressional leaders and a handful of Smith&#8217;s soldiers flown in from Iraq &#8212; where they are now serving their second combat tour &#8212; Smith&#8217;s son David stoically accepted the award for the family as his widowed mom wiped away tears.

After his first combat tour during the 1991 Gulf War, however, Smith earned his sergeant&#8217;s stripes and became known as a stickler for detail.

In a letter written to his parents but never mailed, Smith wrote he was prepared to &#8220;give all that I am to ensure that all my boys make it home.&#8221;

Manning an heavy machine gun atop a armored personnel carrier, &#8220;Smith continued to fire until he took a fatal round to the head.

&#8220;We recall with appreciation the fellow soldiers whose lives he saved, and the many more he inspired. And we express our gratitude for a new generation of Americans, every bit as selfless and dedicated to liberty as any that has gone on before &#8212; a dedication exemplified by the sacrifice and valor of Sgt. 1st Class Paul Ray Smith.&#8221;