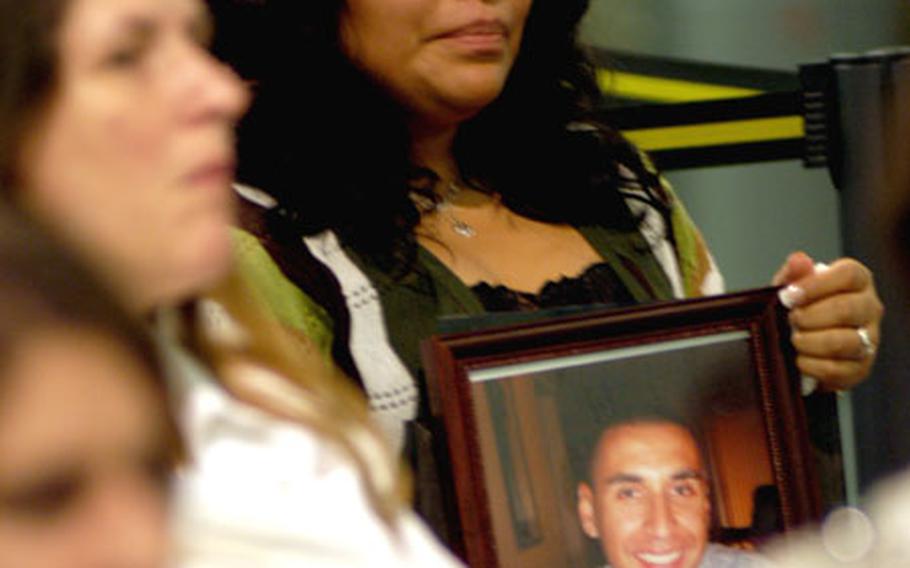 At a naturalization ceremony in Frankfurt, Germany on Tuesday, Salina Jimenez clutches a photograph of her husband, Sgt. David Jimenez Almazan, who was killed by a roadside bomb in Iraq on Aug. 27. Almazan, born in Mexico, was posthumously granted U.S. citizenship. Jimenez accepted her husband’s naturalization certificate. (Matt Millham / S&S)

It belonged to her husband, Sgt. David Jimenez Almazan, a 27-year-old combat medic, who died Aug. 27 in a roadside blast in Iraq&#8217;s Anbar province.

&#8220;This is something we were both looking forward to,&#8221; said the 26-year-old Jimenez as she held the certificate after a naturalization ceremony Tuesday at the U.S. Consulate in Frankfurt.

It goes without saying that he gave all he could.

More than 22,500 servicemembers have been naturalized since the beginning of the Iraq war in March 2003, but only a handful received citizenship after dying in combat.

Almazan, who was a member of the 1st Brigade, 1st Armored Division, was the 84th, according to U.S. Citizenship and Immigration Services (USCIS). It&#8217;s safe to say that his is a rare case.

A few rows ahead of Jimenez, 29 U.S. servicemembers sat waiting to receive their citizenship as well.

Gonzales, himself an Army veteran and a naturalized U.S. citizen, told the troops they were going to be asked to repeat an oath that might seem a little trite. It will ask you to bear arms on behalf of the United States, he said. &#8220;You&#8217;ve done that.&#8221;

Almazan had deeper U.S. roots. He moved to California from Mexico when he was 11, and spent most of his life in the San Fernando Valley. But it wasn&#8217;t until about the time he enlisted that he began to look into how to become a U.S. citizen, Jimenez said. &#8220;In his heart, he always was one.&#8221;

Almazan turned in the paperwork for his citizenship months ago, but his death left the process in limbo. It was up to his wife to push it to its end. Doing so was a no-brainer.

She smiled as she clasped her husband&#8217;s photograph and naturalization certificate in front of her.