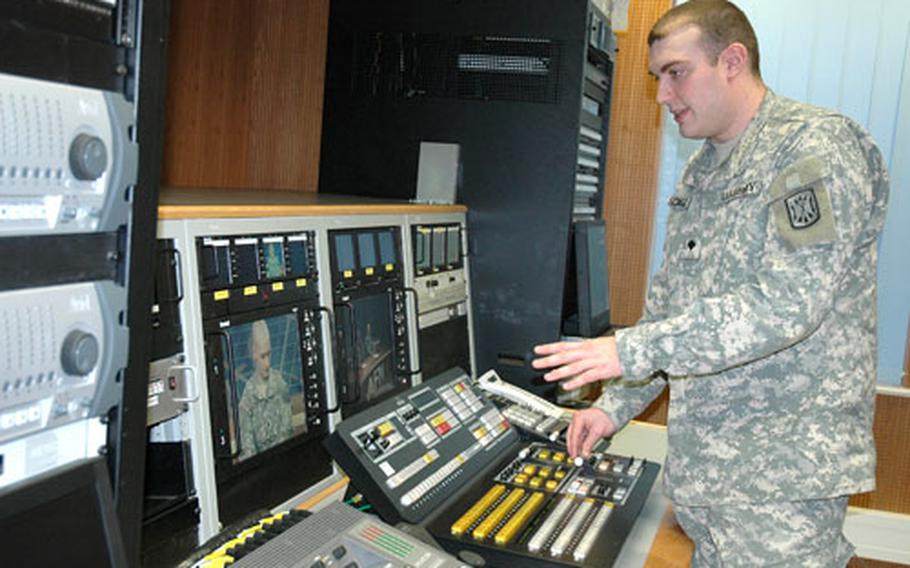 Spc. Anthony Scroggins runs the console while handling production for an American Forces Network broadcast. The police department in Mainz, Germany, plans to present Scroggins with an award for heroism Thursday. (Karl Weisel / Courtesy of the U.S. Army)

Anthony Scroggins is accustomed to reporting the news, not making it.

But four weeks ago, the Army specialist and producer with American Forces Network foiled an audacious knife attack in a German hospital waiting room, then caught the assailant moments later when he tried to escape.

Blair believes Scroggins is being too modest. While the stabbing was taking place, several people in the vicinity watched but didn&#8217;t intervene.

In recognition of his bravery, the Mainz police department plans to present Scroggins with an award for heroism Thursday for his selfless deed on the evening of Jan. 6.

Scroggins happened to be at the right place at the right time because of a little horseplay with his girlfriend. The two were wrestling around at home earlier in the day, when she accidentally bumped her head. In the process, she apparently suffered a slight concussion.

So the couple went to the University Clinic in Mainz to get her checked out. While they were waiting, a commotion ensued in a nearby seating area. Scroggins left her to see what all the fuss was about and from that point on events unfolded at a rapid and confused clip.

The victim was seated; the assailant stood behind him. Scroggins approached from behind, initially thinking the perpetrator was punching the victim.

Scroggins came up from behind the aggressor, slipped his arms under the man&#8217;s arms and yanked upward, more or less executing a full nelson. Just a fraction of a second before the wrestling move, Scroggins remembered seeing the attacker withdraw a knife from the victim&#8217;s side.

With the assailant neutralized and the weapon on the floor, a doctor rushed up to Scroggins and told him to release the man. The doctor took control of the situation. Meanwhile, hospital personnel begin to tend to the injured man, who by now, with a severed artery, was bleeding profusely.

Scroggins re-entered the picture seconds later when the attacker attempted to flee. A brief chase ensued before Scroggins took the man down for good, or at least until German police arrived on the scene.