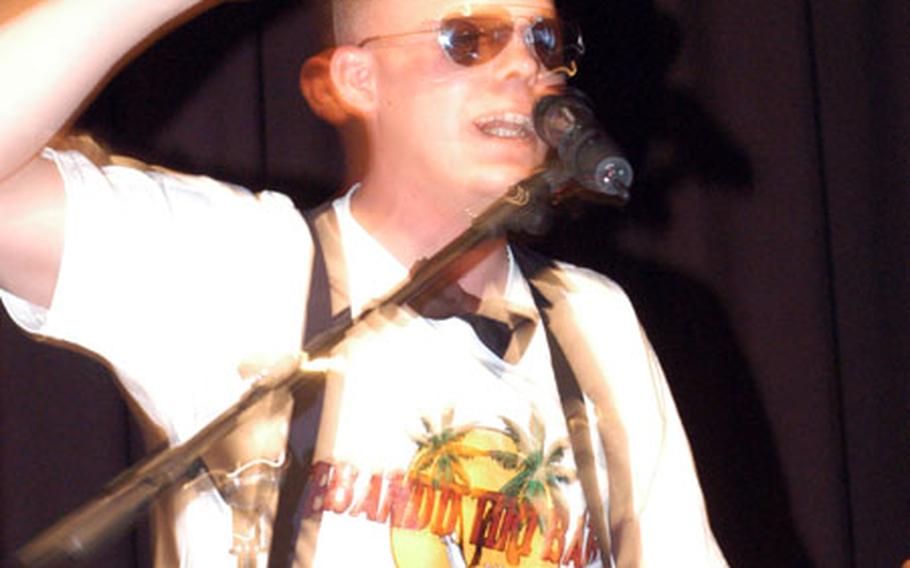 Spc. Joshua Revak performs at the 1st Battalion, 37th Armor Regiment&#39;s ball in April. Revak, who served two tours in Iraq and was evacuated after a mortar blast tore through his ankle, recently completed an album, "In the Hours of Darkness," that is mostly a collection of songs he wrote for soldiers killed in Iraq. ()

It&#8217;s a song about something that, because of one unlucky day, never happened.

In 2003, Sgt. Timothy Hayslett, six months into an Iraq tour with the 1st Battalion, 37th Armor Regiment, was preparing to leave the war zone. Not that he hated the war &#8212; he was highly motivated, believed in what he was doing and was really good at it, said Staff Sgt. Shawn Priet, one of Hayslett&#8217;s friends.

But Hayslett got orders to Fort Wainwright, Alaska, and Priet was tapped to replace him on the personal security detachment for the battalion&#8217;s command sergeant major. For weeks, Priet and Hayslett were inseparable.

They were in the same Humvee the day Hayslett was killed by a makeshift bomb in Baghdad.

Spc. Joshua Revak wrote &#8220;Alaska&#8221; to play at Hayslett&#8217;s memorial ceremony in Iraq. During their two tours, Revak and other 1-37 Bandits, including Priet, wrote and played a lot of songs for memorial ceremonies.

Most were raw and gritty, their lyrics thick with the emotion of the war zone&#8217;s violence, death and loss.

Nine months after Revak&#8217;s own untimely exit from Iraq &#8212; he was wounded by a mortar that killed his roommate and friend Sgt. Terry Lisk &#8212; those feelings remain, though they&#8217;ve been amended by time and reflection.

&#8220;The music in general has been the best therapy for me,&#8221; said Revak, who considered giving up music after his music teacher, who was also his first sergeant, was killed by a makeshift bomb in August 2006. Revak enlisted the help of friends and fellow soldiers to play and sing with him on the album, which was finished in mid-March.

Though the subject matter of the album isn&#8217;t something you&#8217;re likely to find in the pop section of a record store, the music helps bridge the gap between the uncomfortable realities of death and war and the mainstream consciousness, said Heiko Huebschmann, who produced and engineered the album at his studio, Stereo Blue, less than a mile from Ray Barracks, where the Bandits are headquartered.

Most of the 15 tracks are variants of memorial songs Revak wrote for fallen comrades, but they aren&#8217;t intended to rehash the heartache his comrades&#8217; deaths caused, he said.

This sentiment is plain on the track &#8220;Hours of Darkness,&#8221; which portrays the lamentations of a widow who questions why God took her husband, and also on &#8220;Empty Boots,&#8221; a slow, melancholic tune that depicts the scene &#8212; familiar to soldiers, but perhaps not so familiar to those outside of the military &#8212; of a memorial ceremony.