Soldier: Training is one of most grueling parts of the ROK army 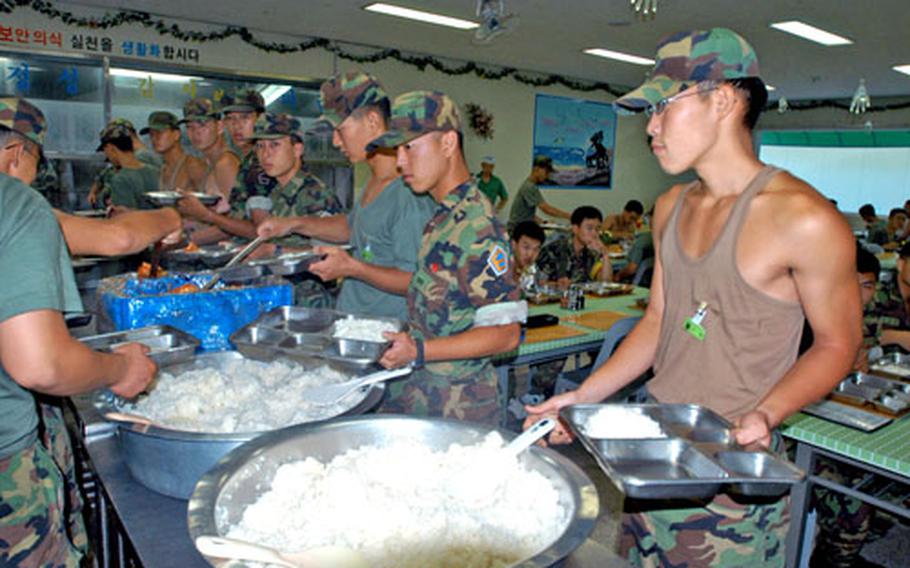 There is all the rice you can eat at a Republic of Korea army chow hall. (Seth Robson / S&S)

There is all the rice you can eat at a Republic of Korea army chow hall. (Seth Robson / S&S) 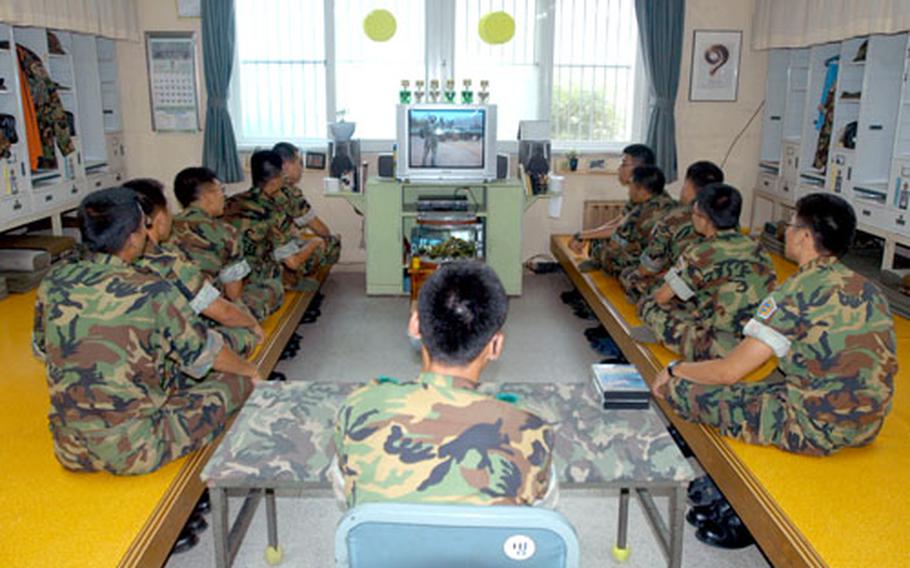 The ROK army&#8217;s 65th Infantry Division home is about halfway between the U.S. Army&#8217;s camps Red Cloud and Casey &#8212; and less than 20 miles from the demilitarized zone that separates North and South Korea.

The base is nicknamed &#8220;Rising Tide,&#8221; a reference to the 8,000 reservists who would flow into the base to supplement the 2,000 regular army soldiers in the division in time of war.

At first glance, the facility, nestled among rolling hills and farmland, appears similar to U.S. bases in the area. But inside the chow hall, the difference is obvious.

Just four simple items were on the lunch menu one day in late July: rice, kimchi, greens and soup.

One of the 65th ID cooks, Pfc. Yon Min Son, 22, joined the army in December, starting his two years of national service before he can pursue a civilian career as a cook.

As a private first class, Yon gets paid 36,000 won, about $35 a month. He said he spends it buying snacks like potato chips and cookies as well as pens and pencils.

During his military service, Yon will get off 35 holidays and 10 days of leave. The only other times he can go off-post is if he gets a reward for special achievements, such as good marksmanship, he said.

Another 65th ID soldier, Cpl. Jang Suk-youn, 26, of Seoul, shares a barracks room with 18 other soldiers from his chemical support unit.

The room includes a fish tank, television and radio. Soldiers are not allowed to have cell phones, MP3 or DVD players or cameras for security reasons.

They store their clothes in small sets of shelves and drawers above the raised sleeping floor.

In late July in another barracks room, soldiers sat watching a video aimed at discouraging them from physically abusing subordinates. The video was a pointed reminder of a June incident in which a South Korean soldier who said he&#8217;d been bullied by a senior officer killed eight comrades using a grenade and rifle.

&#8220;I joined the South Korean military after graduating from California State University last year,&#8221; said Chung, who retained his South Korean citizenship after his family moved to the States when he was a child.

Chung said he promised his father, a former ROK army officer, he would complete his national service in South Korea. He was ineligible for a KATUSA position because candidates must be younger than 28 when they enlist, he said.

To Chung, the hardest part of being a South Korean soldier was yugiyo training, he said.

But however grueling the training, the ROK army is much better now than when Chung&#8217;s father served, he said.

A barracks that would have housed a platoon of soldiers 30 years ago sleeps a squad today, added Woo. By 2008, according to Woo&#8217;s staff, the ROK army plans to house four soldiers to a room.

The facilities at Rising Tide are above average for South Korean army bases, he said, and there are plans to bring all the facilities up to that standard.