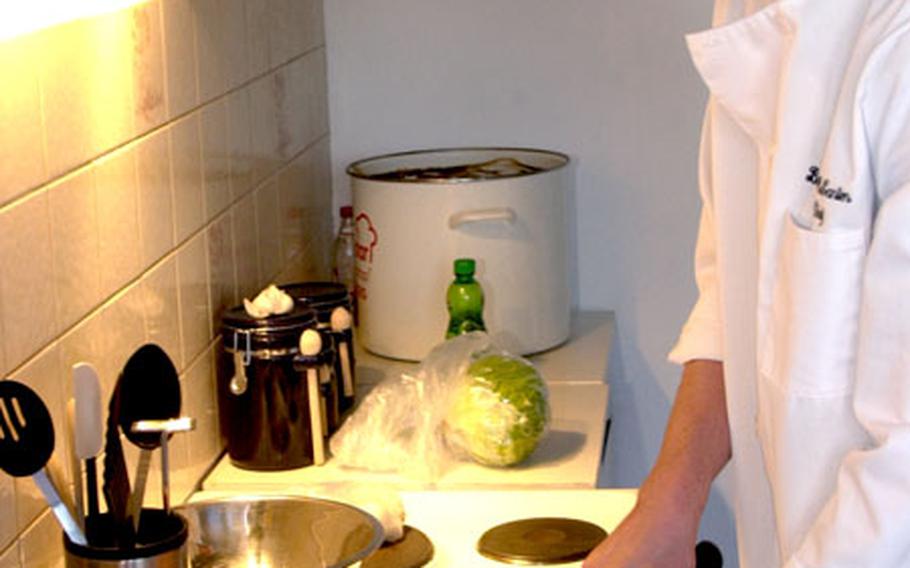 First Lt. Brandon McCarter, in his sous chef uniform, does the prep work for a meal of quesadillas for seven friends. The quesadillas were made with special cuts of beef he marinated, then grilled. (Terry Boyd / S&S)

BAUMHOLDER, Germany &#8212; In Baumholder &#8212; a culinary desert for everyone who&#8217;s not a schnitzel connoisseur &#8212; a fortunate few know where to find meals prepared by a host whose weekly soirees are culinary adventures.

When 1st Lt. Brandon McCarter&#8217;s in the kitchen, magic happens.

The menu varies, depending on what McCarter can rustle up at the Baumholder commissary or at local German supermarkets. It might be sea bass medallions in tarragon sauce or seafood Alfredo if he&#8217;s trying to impress a date, with fresh scallops, shrimp, crab, mussels &#8220;and, if I can get them, clams,&#8221; McCarter said. Or the menu might be chicken parmesan with roasted new potatoes or roasted garlic broccoli.

McCarter is the medical officer for the 1st Armored Division&#8217;s 1st Battalion, 35th Armored Regiment when he&#8217;s not wearing his perfectly starched sous chef tunic and pants. The 24-year-old can do far more exotic fare, but for soldiers, he said, &#8220;I like to keep it familiar.&#8221;

Last week, he rolled out exquisite quesadillas made with special cuts of beef called &#8220;skirt steak&#8221; that he chose because they best absorb the flavor of his special marinade.

McCarter puts an unbelievable amount of work and care into his food, said LeAnne MacAllister, who works in public affairs for the 222nd Base Support Battalion at Baumholder.

When McCarter does pulled pork, for instance, he buys the piece of the pig he wants to roast, boils it for two days in seasonings, then slow cooks it for another day before pulling it by hand, MacAllister said.

McCarter is no amateur putzing around the kitchen with his nose in a cookbook.

All the knowledge comes from years working in restaurants, beginning at age 15 in his hometown of Charleston, S.C., as a bus boy, and working his way up to prep cook and lunch cook at the Rio Bravo, part of the Chevys Inc. restaurant chain. But he realized he had talent in the kitchen when he&#8217;d dream up a recipe and a m&#233;lange of ingredients, and most of the time it was right, McCarter said.

That talent made him something of a celebrity at The Citadel, the demanding military college in Charleston. There, he cooked on the sly for the academy&#8217;s elite Summerall Guard silent precision drill team. After their nightly drills, &#8220;they&#8217;d all pile into my room for meals, these hard-core guys,&#8221; McCarter said.

Waiting for his branch assignment into the Army, McCarter returned to the kitchen on Kiawah Island, S.C., making sous chef under executive chefs Charles Arena at the Beach Club, and under Paul Tinsley at The River Course &#8212; both five-star restaurants. &#8220;That&#8217;s where I learned a lot of what I know,&#8221; McCarter said. &#8220;It&#8217;s easy cooking for one or two [people]. It&#8217;s hard to get quality with quantity,&#8221; which is what he says he learned in the restaurants.

The Baumholder get-togethers started in May 2004 when Ric Jones and McCarter met, a friendship that has since attracted a critical mass of friends who began dining together every week after the 1st AD came back from Iraq last summer.

Guests at the apartment in Oberkirchen he shares with 1st Lt. Owen Banks, who is assigned to the 2nd Battalion, 6th Infantry Regiment, include civilians and active-duty troops from the entire Baumholder community. Every branch is represented from infantry to legal to tankers &#8212; unusual in an Army culture where war fighters rarely mingle socially.

It&#8217;s a fun atmosphere that draws its energy and conviviality from McCarter, who says that after his Army career, he&#8217;d like to open a combination restaurant and jazz club in Charleston, or somewhere in the southeastern United States.