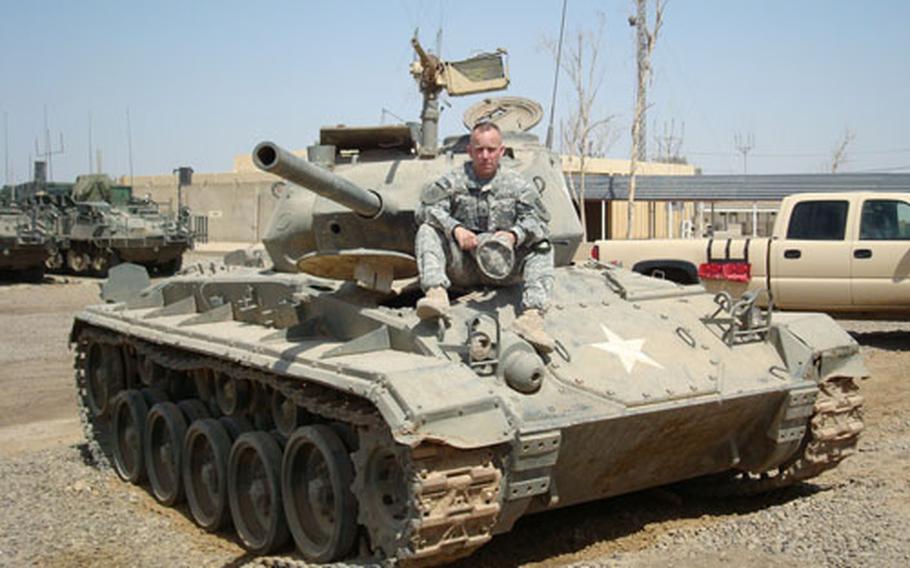 Staff Sgt. Kevin Corcoran of the California National Guard sits atop a World War II-era American tank on Camp Taji, Iraq, that he is trying to acquire for a California museum. (Courtesy of Kevin Corcoran)

Staff Sgt. Kevin Corcoran of the California National Guard sits atop a World War II-era American tank on Camp Taji, Iraq, that he is trying to acquire for a California museum. (Courtesy of Kevin Corcoran) 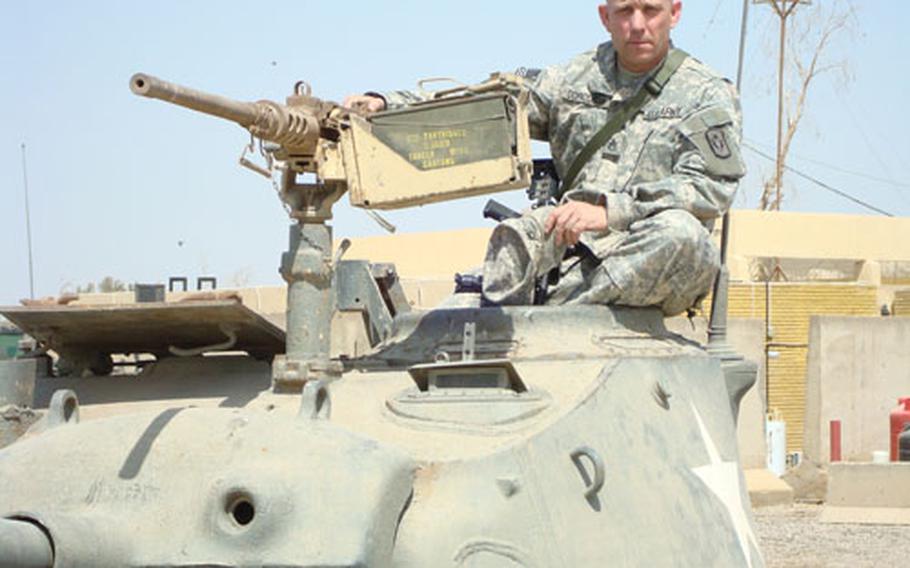 There were many things Staff Sgt. Kevin Corcoran expected to find when he arrived at Camp Taji, Iraq. A World War II-era American tank wasn&#8217;t one of them.

But there it was, an M24 Chaffee, possibly from the Battle of the Bulge, sitting in front of an infantry division&#8217;s headquarters.

Corcoran, who describes himself as &#8220;one of those dorky guys who really gets into this stuff,&#8221; decided then and there that he would find a way to get the piece of American history back on American soil. His father fought in the Battle of the Bulge, when the Chaffee tanks made their first appearance.

Perhaps not surprisingly, though, getting a 60-year-old tank back to the States hasn&#8217;t proved an easy task for the 44-year-old California National Guardsman, though he has had some successes along the way.

The first task was wresting control of the tank from the 25th Infantry Division, which was using it as a kind of mascot. Corcoran approached this task boldly, spending several weeks pestering the division&#8217;s command sergeant major.

Corcoran&#8217;s unit, part of the California Army National Guard&#8217;s 143rd Field Artillery, towed the old tank home to their part of the base, finding it in surprisingly good condition. The turret worked and the engine, Corcoran said, was in running condition except for a missing carburetor.

Of course, as he and other soldiers schemed for a way to get the tank back to California, they also pondered how the M24 wound up in Iraq in the first place.

Roughly 4,700 M24s, a light tank designed primarily for cavalry missions, were produced by Cadillac between 1944 and 1947. Armed with a 76 mm main gun and slightly thicker armor than older light tanks, a handful of the Chaffees took part in fighting in the Ardennes. The tanks also saw action in Korea before they were replaced in 1953.

Like many U.S. weapons systems, the Chaffee then embarked on a long second life that at least suggests the route by which it ended up in Iraq. Hundreds of the tanks were given to allies like Britain and France under the Lend-Lease program. The French airlifted 10 of the tanks into their beleaguered defenses at Dien Bien Phu in Indochina and also used the M24 in Algeria.

In later years, the M24&#8217;s diaspora spread across much of the world. Pakistan fielded Chaffees in Bangladesh during its war with India in 1971. According to several historical accounts, both Iran and Iraq had M24s during the early years of their war in the 1980&#8217;s, though there&#8217;s no account of the tanks being used in combat.

&#8220;The most likely scenario for how the tank got to Iraq is that the U.S. either sold it to them or they got it from one of the countries we&#8217;d given it to through Lend-Lease,&#8221; said Gary Corippo, a director at the Estrella Warbird Museum in Paso Robles, Calif., which is working with Corcoran to get the tank to the West Coast and put it on display.

Though M24s with upgraded gun systems were used by the Norwegian Army until 1993 and by several Latin American countries until even more recently, Corippo estimated that there may be no more than 20 good-condition Chaffees left in the world.

It&#8217;s not uncommon, he said, for current and former servicemembers to develop a deep sentimentality toward aging military equipment.

Corcoran said he was holding out hope for last-minute help from above.

&#8220;Maybe some general will read a story in Stars and Stripes and volunteer to have his unit bring it home,&#8221; he said.