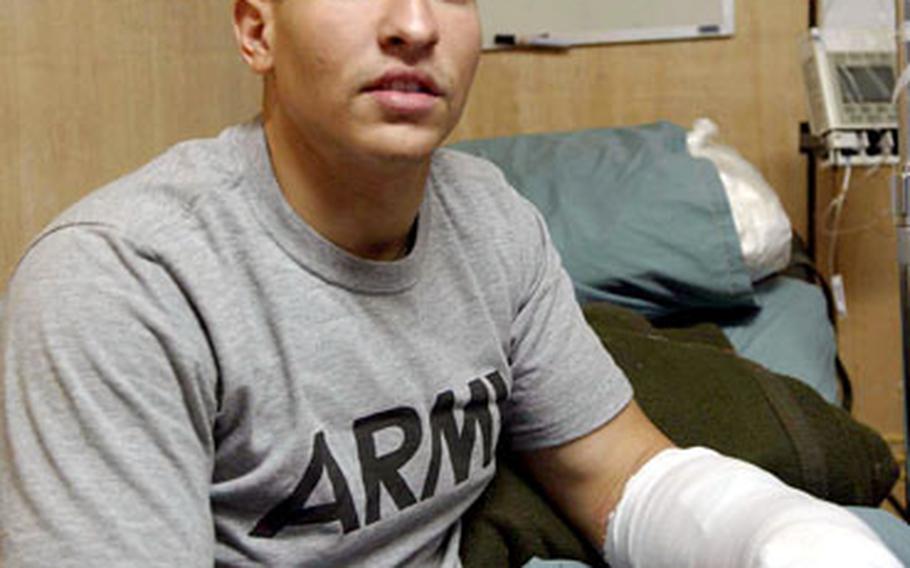 Cpl. Ruben Burgos, wounded during a suicide car bomb attack on a U.S. Army convoy in Kabul, Afghanistan, on Friday, is being treated at the 14th Combat Support Hospital on Bagram Air Base. (Michael Abrams / S&S)

On Saturday &#8212; the day after Burgos survived a suicide bomb attack that killed 16 people, including two U.S. soldiers, outside the U.S. Embassy gate in Kabul &#8212; he had an answer.

&#8220;I think the watch deflected whatever hit me,&#8221; Burgos said from his hospital bed at the Bagram Air Base hospital.

Burgos, whose left arm had been surgically cleaned and was bandaged from the hand to the bicep, was headed to Landstuhl Regional Medical Center in Germany for further care. But other than his &#8220;ripped up&#8221; forearm, the 24-year-old soldier was uninjured, which surprised him.

&#8220;All I saw was a wall of fire,&#8221; Burgos said, describing the fractions of seconds he remembered after the blast, which is being called the worst suicide bomb attack in Kabul in the past five years. &#8220;And it got really hot, and I thought I was on fire. I told the medic to put me out.&#8221;

Burgos wasn&#8217;t on fire and suffered no burns. But the medic told him later that the heat was so intense, steam was coming off Burgos&#8217; body.

Burgos apparently was the only U.S. soldier injured in the attack. Two soldiers in the Humvee in front of his, and, according to news reports, up to five more foreigners, possibly contractors, were also killed. The rest of the dead and injured were Afghans.

It was particularly disturbing that the bomber hit so close to the embassy and what had been considered relatively friendly territory.

Burgos had been at Bagram with a group on Friday to pick up three brand-new Humvees. The three then headed to Kabul to pick up two people at the embassy. Burgos was the gunner in the third Humvee.

Just before the blast, he said, he&#8217;d been signaling a white car that was following too fast and closely to slow down and back off. He pointed his weapon at the car, he said, and was also watching a couple of other cars around his convoy.

One was a Lexus, with children inside. Burgos had been trained, he said, that suicide bombings are usually carried out by a lone driver, so he wasn&#8217;t too worried about that car. And the kids inside were waving, so Burgos waved back.

He was just turning to look at the white car and another blue car when it happened.

The suicide bomber, he was told later, was in the blue car. It struck the middle Humvee and destroyed it. The blast also blew out the hatch in the front Humvee, but the blast traveled mostly backward, toward Burgos.

His Humvee was destroyed.

Burgos arrived in Afghanistan from Fort Bragg, N.C., in April, and he hopes to return soon to his unit. He&#8217;s the second in his platoon, he said, to have been injured.