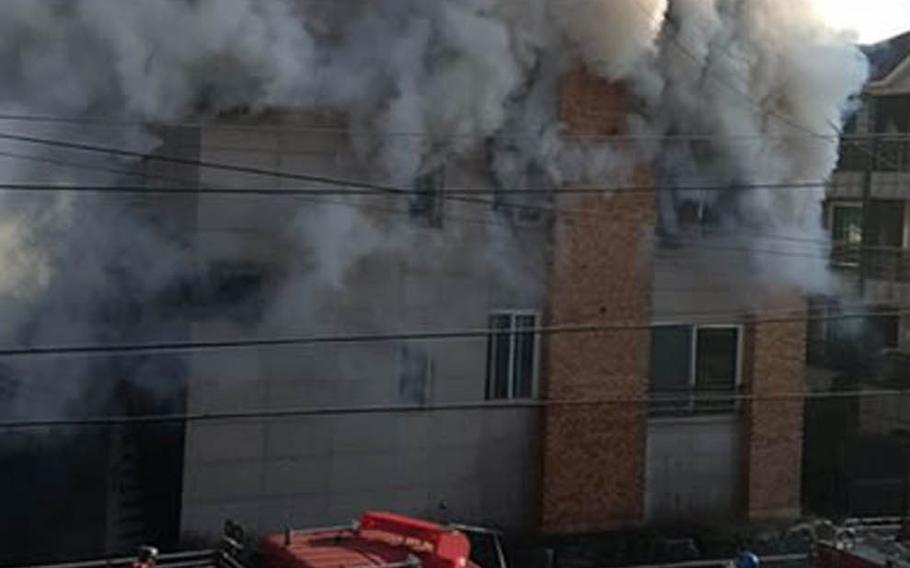 OSAN, South Korea — A soldier’s weekly commissary run turned into a daredevil rescue last month when he scaled an apartment building to save a woman and her baby after spotting a fire near Camp Humphreys.

Sun Yong Helmer was home with her baby when she smelled smoke around 4 p.m. on Feb. 5. She tried walking out of her third-floor apartment toward the stairs, but thick black smoke prevented her escape.

“The smoke started coming through under the door, first white, then grey, and then black,” Helmer said in an interview with Camp Humphreys’ public affairs office, which was shared with Stars and Stripes. “I was so so scared.”

She called the fire department, but instead of firemen at her door, she found Staff Sgt. Victor Gomoimunn hanging from her window.

Gomoimunn, 33, from Waterford, N.Y., and assigned to the 339th Quartermaster Company at Camp Humphreys, was driving to the grocery store with his wife and two daughters when they noticed smoke billowing from the apartment building in his neighborhood.

They stopped and joined a crowd of people gathered around the building. Helmer’s husband said his wife and child were trapped on the third floor and his attempts to reach the apartment had failed.

“No one was doing anything — so I went,” Gomoimunn said.

He climbed up what he thought was a water pipe but turned out to be for gas and reached Helmer, a civilian employee who was working as a nurse at Camp Humphreys. Helmer and her husband have since been transferred to Germany.

Helmer was shocked to find a stranger outside her window.

“I felt horrified, but he brought big comfort,” she said. “He tried to examine the rooms and see what he could do.”

Twenty minutes later firefighters arrived and escorted all three out of the building.

Gomoimunn’s wife had mixed feelings about her husband’s quick action.

“She wasn’t sure if she was angry at me or proud of me,” Gomoimunn said with a laugh. “After about 45 minutes of debate, she called me a hero.”

News of the rescue was slow to emerge because a humble Gomoimunn didn’t tell anybody at first.

Now dubbed Spiderman by his unit, he insists it was a family effort.

His wife started a Facebook group seeking aid for the people affected by the fire, which has since been taken over by the unit. His two daughters helped calm down the other children from the apartment. They also took the initiative to donate shoes and clothes so the afflicted kids could attend school the next day.

Gomoimunn said it was ultimately the thought of his family being in danger that drove him that day.

“If my wife and kids were stranded in a fire and I wasn’t able to do anything, I would pray for someone who could,” he told Stars and Stripes Wednesday in a telephone interview from the southeastern port city of Pohang, where he is participating in a military exercise.

Helmer is grateful people like Gomoimunn live in her community.

“I deeply appreciate what he did that day, I really believe that he’s a hero and should be recognized,” she said. “I’m so proud he’s one of our soldiers at Camp Humphreys.”