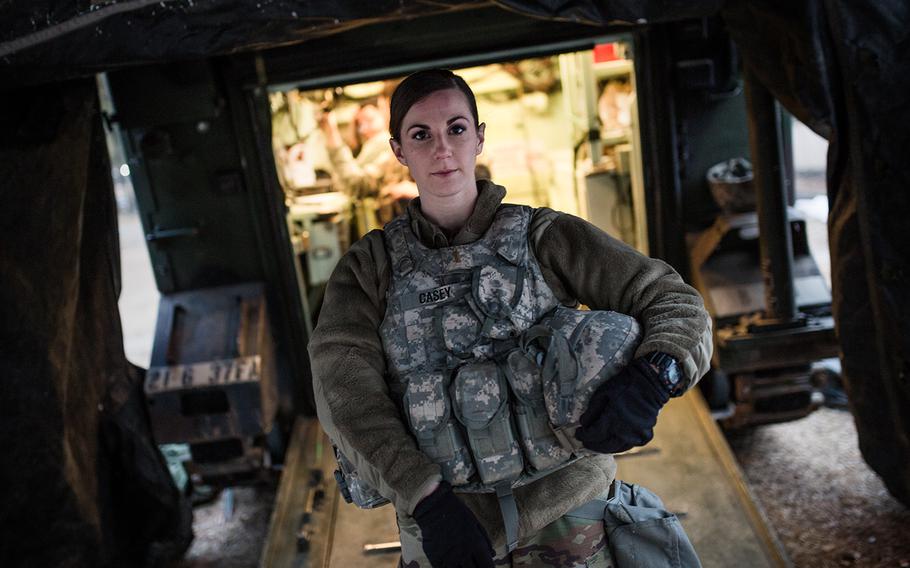 Maj. Hugh B. Casey, the namesake for Camp Casey, South Korea, sits at a desk, date and location unknown. (Courtesy of Sarah Casey) 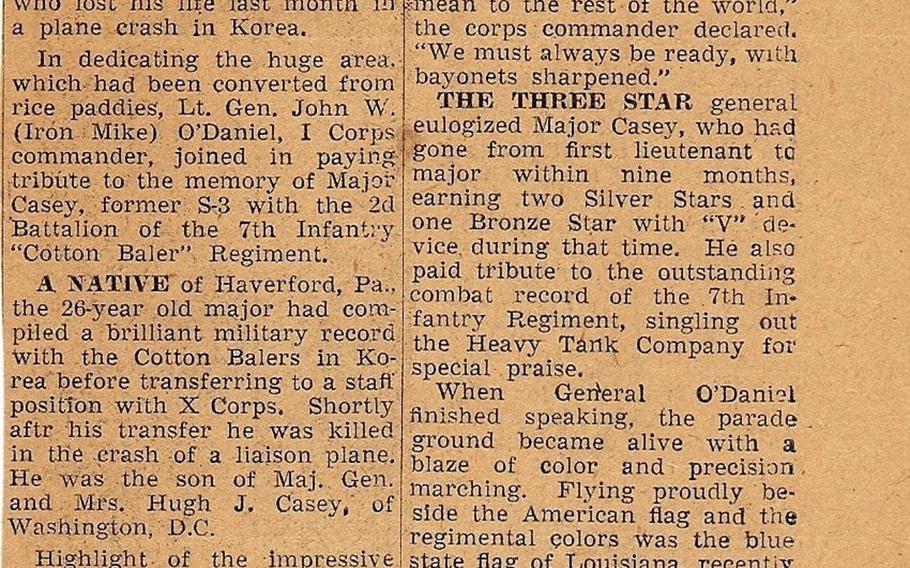 A portrait of Maj. Hugh B. Casey, the namesake of Camp Casey, South Korea, date and location unknown. (Courtesy of Sarah Casey) 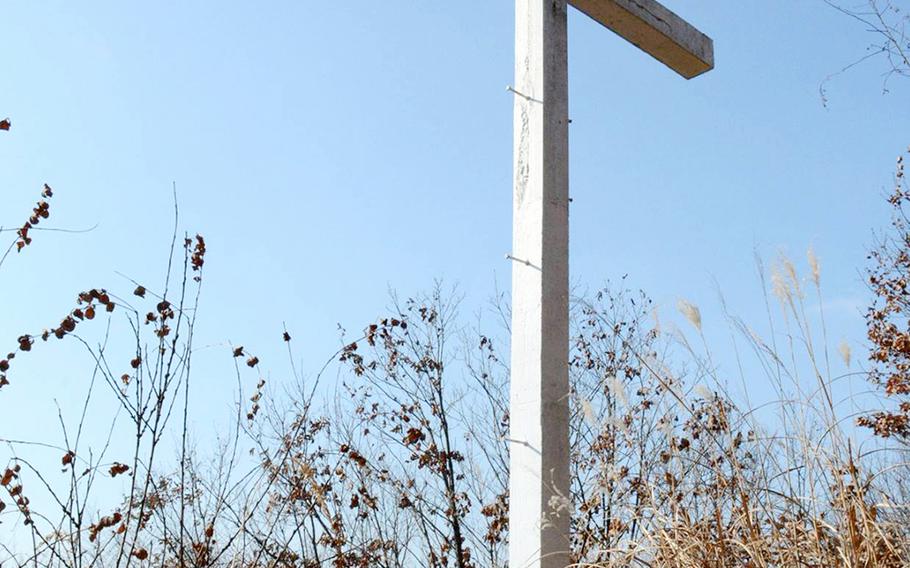 Second Lt. Sarah Casey places a wreath at the foot a cross on the 66th anniversary of the death of great-uncle, Maj. Hugh B. Casey, at Camp Casey, South Korea, Jan. 11, 2018. Major Casey died during the Korean War in a plane crash near the garrison, which was renamed in his honor. (James Griffin/U.S. Army) Second Lt. Sarah Casey places a wreath at the foot of a cross on the 66th anniversary of the death of great-uncle, Maj. Hugh B. Casey, at Camp Casey, South Korea, Jan. 11, 2018. Major Casey died during the Korean War in a plane crash near the garrison, which was renamed in his honor. (James Griffin/U.S. Army)

The artillery platoon leader from Collierville, Tenn., played along with the ribbing when folks greeted her with comments like, “Casey at Casey!” after glancing at her name tape. Until last month, when she revealed her secret. The camp was named in honor of her great-uncle, Maj. Hugh B. Casey, a World War II veteran killed in the Korean War who was awarded two Silver Stars during the liberation of the Philippines.

“I’m not here to say, ‘Hi, I’m Sarah Casey at Camp Casey,’ ” she said. “I think it’s important to remember the sacrifices of all those who came before us; that’s what the real story is to me.”

Sarah Casey was 26 when she arrived in South Korea — the same age her great-uncle was when he lost his life. She said her path to Camp Casey was destined.

“I’m one of those people who believes everything happens for a reason,” she said.

The same war Maj. Hugh Casey’s actions during the Korean War, which broke out in 1950, earned him two battlefield promotions and a third Silver Star.

He was among the first to relieve beleaguered United Nations troops, and experienced the war’s high points during the drive north and its lows while escaping the Chinese at Hungnam beachhead.

During a counteroffensive against Chinese forces near Suwon, just south of Seoul, Casey led a task force of 7th Infantry Regiment soldiers deep into enemy territory. He was leading a company on a hill 700 yards from Chinese lines when the Communists opened fire on an American patrol, United Press International reported Feb. 5, 1951.

“Casey ordered his men to fix bayonets, and they charged the entire 700 yards into the enemy force, killing 60 in a furious melee of stabbing, grenading and close quarter rifle fire,” the report said.

A small plane he was riding in crashed into a hill overlooking a temporary camp. Within weeks, the small base was renamed in his honor.

A large white cross was placed at the crash site in his memory.

Last month — 66 years to the day that Casey lost his life — his great-niece laid a wreath at the base of that cross. While walking up the steep hill, she said she was filled with emotion as she passed the remnants of Korean War-era fighting positions.

“I got mad, angry and then I just got sad,” she said, thinking about the cost of war.

Sarah Casey — who leads 18 troops and four Multiple Launch Rocket Systems as a member of the 210th Field Artillery Brigade — is technically involved in the same war as her great-uncle. Conflict on the Korean Peninsula ended in 1953 with an armistice, not a peace treaty. She’s one of about 28,500 U.S. troops still manning stations south of the DMZ.

Sharing memories The Korea posting prompted Sarah Casey to delve into her family’s old journals, newspaper clippings and her great-uncle’s last letters home. She has transcribed and digitized them for posterity.

In one letter to his mother and father, Casey wrote, “I don’t know if I told you this lately, but you’re the greatest parents in the world and I’m so thankful and blessed to have you.”

She has also been reading old love letters her great-grandfather, Maj. Gen. Hugh J. Casey, sent to his wife during World War II. He served alongside her great-uncle during the Philippines campaign, during which the elder Casey served as Gen. Douglas MacArthur’s chief engineer.

Sarah Casey also shared a trove of photos of the family reunited in Japan between the two wars. She said she possesses the same love of family and duty as her forefathers.

She didn’t believe her story would resonate with anyone outside of her family, until a photo of her laying the wreath was posted on Camp Casey’s official Facebook page. The positive, supportive comments were overwhelming.

“The memories you get to share with the people in the military are completely unique — something you can’t match anywhere else,” she said of the thousands of troops who have called Camp Casey their temporary home. “To know people are forming bonds at this place is very heartwarming.”