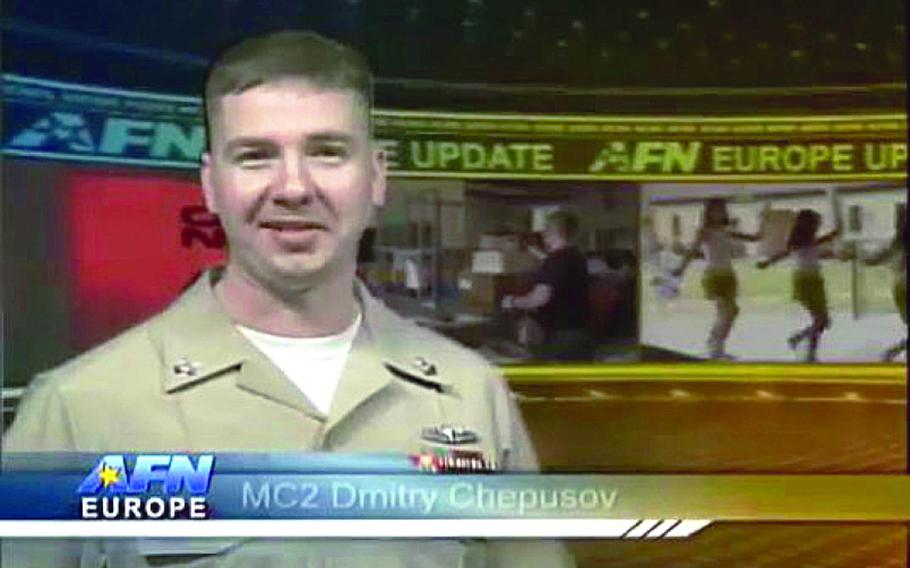 RAMSTEIN AIR BASE, Germany — A close friend of an Air Force staff sergeant accused of premeditated murder said in a court-martial Thursday that he knows the airman committed the killing because “he told me.”

Army Pvt. Cody Kramer, a technician for the American Forces Network, was one of the last people to see Navy Petty Officer 2nd Class Dmitry Chepusov alive before he was strangled Dec. 14, 2013.

Testifying at the trial of AFN technician Staff Sgt. Sean Oliver, Kramer did not hesitate to name his former AFN colleague and point him out as the person who alone killed Chepusov.

Asked by a prosecutor how he knew that, Kramer said, “He told me, sir.”

Kramer testified that after hearing a scuffle and breaking glass, he went into the kitchen of the apartment where he and other work friends and colleagues were hanging out after a night of drinking. Oliver was in there with Chepusov, he knew, because he’d left them in there together moments earlier. Kramer opened the door and saw Oliver on top of Chepusov, he said.

Kramer said Oliver’s back was to him, but Oliver turned his head and told Kramer to “Go away.”

Later, after everyone else had either left or gone to sleep, Oliver showed Kramer Chepusov’s body, which was stashed in a bathroom.

Kramer said Oliver asked for help cleaning up and moving the body, but he refused, telling Oliver, “You screwed up, man. This is it.”

Kramer was also charged in Chepusov’s murder, though most of the charges were later dropped and he pleaded guilty to making a false official statement as part of a plea agreement that guaranteed him immunity from further prosecution if he testified truthfully in Oliver’s court-martial.

The trial recessed before Oliver’s defense had an opportunity to cross-examine Kramer, who said he acted alone in lying to investigators because he was trying not to get involved. Kramer was witness to another murder investigation as a child, when his three-year-old sister was murdered by a relative.

The panel of officers and enlisted men who will decide Oliver’s fate also heard Thursday from Chepusov’s estranged wife, Karla Alejandra Zolezzi. Chepusov wanted a divorce, Zolezzi said, and the two had wrangled over a separation agreement.

Kramer said Chepusov had encouraged his wife’s relationship with Oliver, but at some point that changed. Chepusov, an AFN broadcaster, intended to have Zolezzi sent back to the U.S., known as an “early return of dependents,” Kramer said.

Zolezzi and Oliver both admitted — Oliver in a statement to Air Force investigators and Zolezzi in testimony Thursday — to having a sexual relationship that began in November 2013. Zolezzi appeared to dispute that the romance was continuing at the time of her husband’s death. She said she could not recall the last time she had sex with Oliver.

Kramer testified that he was out to dinner with Oliver, Zolezzi and Thomas Skinkle — whose apartment was the scene of Chepusov’s death — a week before the killing, and that Zolezzi and Oliver were kissing and holding hands that evening. At the dinner, they had a “joking conversation” that everyone would be better off without Chepusov, who Kramer said was often offensive. Someone in the conversation said Zolezzi would be better off without Chepusov because she’d get his $400,000 life insurance policy. Kramer said she objected to that, telling the others she “still loved” Chepusov.

Zolezzi testified that she was the policy's beneficiary, but that she was not aware that Chepusov had listed her as such.

The defense is expected to question Kramer on Friday.