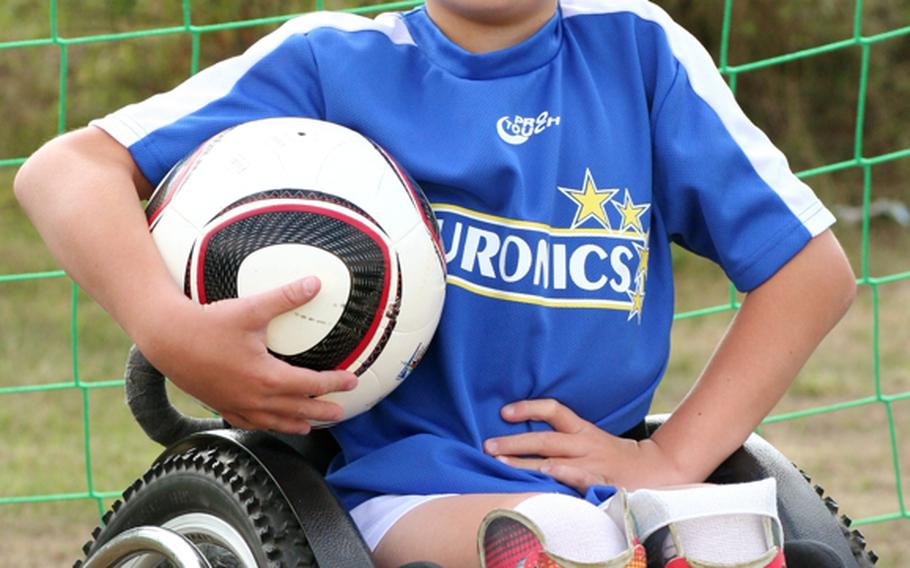 Dustin Stallberg, 8, in his sports wheelchair. Born with spina bifida, Dustin, wants to follow in the treads of his hero, Aaron "Wheelz" Fotheringham, a wheelchair athlete. Dustin, the son of Army Sgt. Timothy Stallberg of the 172nd Infantry Brigade in Schweinfurt, will get to meet Fotheringham later this summer in Las Vegas, after winning a local radio station&#39;s contest in Germany. (Stallberg family/Courtesy photo)

KAISERSLAUTERN, Germany &mdash; Most of his life has been spent in a wheelchair, but that hasn&rsquo;t stopped 8-year-old Dustin Stallberg from dreaming of back flips and hand plants.

Born with spina bifida, Dustin wants to follow in the treads of his hero, Aaron &ldquo;Wheelz&rdquo; Fotheringham, a wheelchair athlete, who performs tricks adapted from skateboarding and BMX.

Fotheringham, 19, who also has spina bifida, a birth defect that in most cases results in a disability, is credited with landing the first ever back flip in a wheelchair.

The son of Army Sgt. Timothy Stallberg of the 172nd Infantry Brigade in Schweinfurt, Dustin will get to meet Fotheringham and perhaps even learn a few tricks later this summer, after winning a local radio contest.

Antenne Bayern radio station near Munich, along with soft drink manufacturer Franken Brunnen, held a promotion this month to fulfill the wishes of children living in the Southern German state of Bavaria.

Dustin&rsquo;s name was one of 12 randomly drawn from among more than 10,000 entries, said Jennifer Linseisen of Antenne Bayern.

&ldquo;We were happy about having the chance to fulfill such a great and emotional dream,&rdquo; she said of Dustin.

Other winning wishes included swimming with sharks, being mayor for one day, horseback riding to school, spending the night in a toy shop, and flying to Alaska to see one&rsquo;s father, Linseisen said.

For his wish, Dustin&rsquo;s family of five &mdash; he has two younger brothers &mdash; will fly to Las Vegas for three weeks in August. He&rsquo;ll get to spend some time with Fotheringham, presumably at a skate park.

Dustin, who also speaks German, can already do a wheelie on his sports wheelchair, but he wants to do more.

&ldquo;It&rsquo;s cool to learn such stunts, and I would show it to other people,&rdquo; he said by phone from his home in Eltmann.

Fotheringham said by email that he&rsquo;s &ldquo;pumped&rdquo; to meet Dustin.

&ldquo;I&rsquo;m honored to be considered his hero and &hellip; I&rsquo;d love to maybe be able to show him how spina bifida can be fun, and not so much of a burden.&rdquo;

Timothy Stallberg, Dustin&rsquo;s father, said he thinks learning from Fotheringham will show his son that &ldquo;you can accomplish whatever you put your mind to, whether you&rsquo;re actually able to walk or not.

&ldquo;He already wants to get a helmet, knee pads and elbow pads,&rdquo; he said.