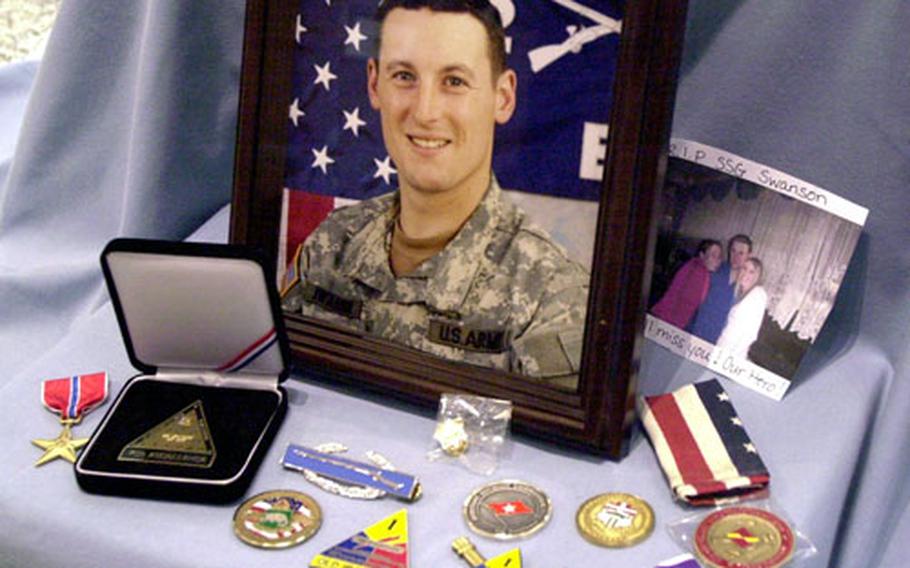 Commanders’ coins, a Combat Infantryman Badge and medals — including one of his two Purple Hearts — surround the photo of Staff Sgt. Chris Swanson after his memorial Friday at Good Samaritan Chapel in Baumholder, Germany. An admirer also placed a photo inscribed “RIP SSG Swanson, our hero. We’ll miss you.” (Terry Boyd/Stars and Stripes)

BAUMHOLDER, Germany &#8212; Being a career soldier meant Staff Sgt. Chris Swanson had made the eight-man squad he led his family.

And because they were his family, Swanson would do anything for those eight men, including give his life for them, Staff Sgt. Joshua Tucker told mourners gathered Friday for Swanson&#8217;s memorial.

Swanson, of Company B, 2nd Battalion, 6th Infantry Regiment, died July 22, shot by a sniper while leading that squad during a combat patrol in Ramadi.

It was the third Iraq tour for Swanson, a 25-year-old native of Rose Haven, Md.

He wasn&#8217;t just an able soldier, said those who saluted him Friday at H.D. Smith Barracks. It was hard to see any limits on Chris Swanson&#8217;s Army career.

In the 82nd Airborne before he came to the 1st Armored Division, it took him only 18 months to rise from specialist to E-6. He was chosen last year to lead a squad in a live-fire demonstration at Grafenw&#246;hr Training Area for Secretary of the Army Francis Harvey, said Capt. Marvin King III, 2-6 battalion rear-detachment commander.

As career soldiers, both understood what Swanson was in for, going to Ramadi, Tucker said in an interview. He was going to combat. &#8220;I knew what he was getting into. He knew it too.&#8221; Swanson already had earned the Purple Heart. It took 25 stitches to sew up a shrapnel wound from an improvised bomb two weeks ago, according to media reports.

But if ever there was a soldier prepared for combat, it was Swanson. Swanson was from a family of public servants who served in the police, military and the FBI. For the time they&#8217;d known each other, Tucker watched Swanson &#8220;evolve from a good friend into a great soldier,&#8221; he said. Ambitious, aggressive, determined, energetic and most of all competent were the adjectives those who knew him used.

Swanson was also incredibly competitive, on duty and off, King and Tucker said.

Swanson was adept at forming close, long-lasting friendships, friendships that extended to locals. He still can visualize Swanson off duty, relaxing in the nearby old Roman city of Trier, surrounded by his German friends, Tucker said.

Swanson is survived by his father and mother, Gary and Kelly Swanson, and a brother, Kenny.

Swanson was one of three 1st AD soldier to die this week. Capt. Jason M. West, 28, of Pittsburgh, Pa., died July 24 in Ramadi, when insurgents attacked his unit with small arms fire. West was assigned to the Friedberg-based 1st Brigade.

Another 1st Brigade soldier died the same day in a separate attack, but neither the Department of Defense nor the division has yet released his name.