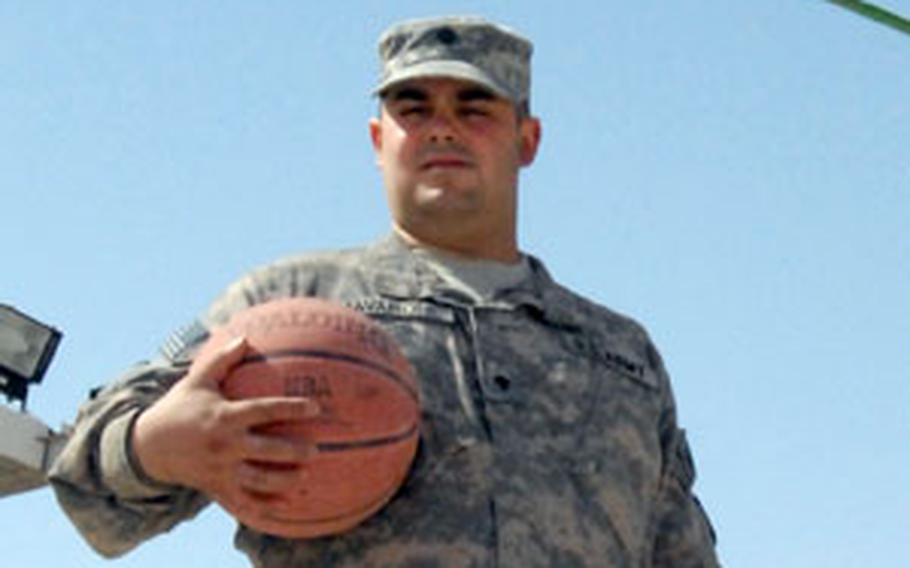 Chuck Iavarone had a love of the game in mind when he bought the Syracuse ShockWave American Basketball Association franchise in early 2008. He was all set to assemble a squad and start his inaugural season when the Army came calling.

Individual Ready Reserve status can screw up even the best laid plans. So in October 2008, Spc. Iavarone put his hoop dreams on hold and deployed to Iraq for a year with the 39th Military Police Company.

ABA fans in Syracuse will have to wait another season before they can cheer on their hometown heroes.

Iavarone was a reservist who moved to IRR status in 2007.

"I had the desire to continue to serve, but at the same time I definitely wanted to get the ShockWave up and running," he said.

Iavarone said he paid "several thousands, not in the millions" for the rights to the ABA expansion franchise in Syracuse.

"I&#8217;ve always had a love for sports management and [a desire] to own my own team," he said. "The opportunity became available and I had to take it."

In his civilian life, Iavarone was a town supervisor for Salinas, a town on the outskirts of Syracuse.

When he gets back from Iraq, Iavarone said he&#8217;ll have to first assemble a coaching staff and then go looking for talent while selling the team to the community. Community involvement is a big part of the ABA and its 60 teams spread out across the country, from the Southeast Texas Mustangs to the Cleveland Rockers, according to Joe Newman, who helped resurrect the ABA in 2000.

There remains a connection to the ABA&#8217;s heyday in the 70s, when it competed with the NBA, even as the league serves as a platform for some would-be NBA players, Newman said.

"At that time they were competing directly with the NBA by signing guys like Dr. J and Moses Malone," Newman said.

In this rough economic climate, affordability is becoming a key selling point for the ABA, he said.

The ABA season roughly coincides with the college hoops schedule, with the teams divided into two conferences east and west of the Mississippi River, Newman said.

"Our players are very regional," he said. "We ask teams to sign players that are very competitive from the area. If you&#8217;ve been following a player through high school or college, you get a chance to see the best of these non-NBA players."

While he continues his deployment, Iavarone said he looks forward to helping veterans as part of the team&#8217;s community outreach.

The timing may not have been perfect for Iavarone, but he hopes troops realize there are options out there for them when they leave the warzone.

And a year downrange can only help the ShockWave&#8217;s bottom line.

"I&#8217;ve been able to save some money and put it away and we should be in a position next year to get (the team) going," he said.