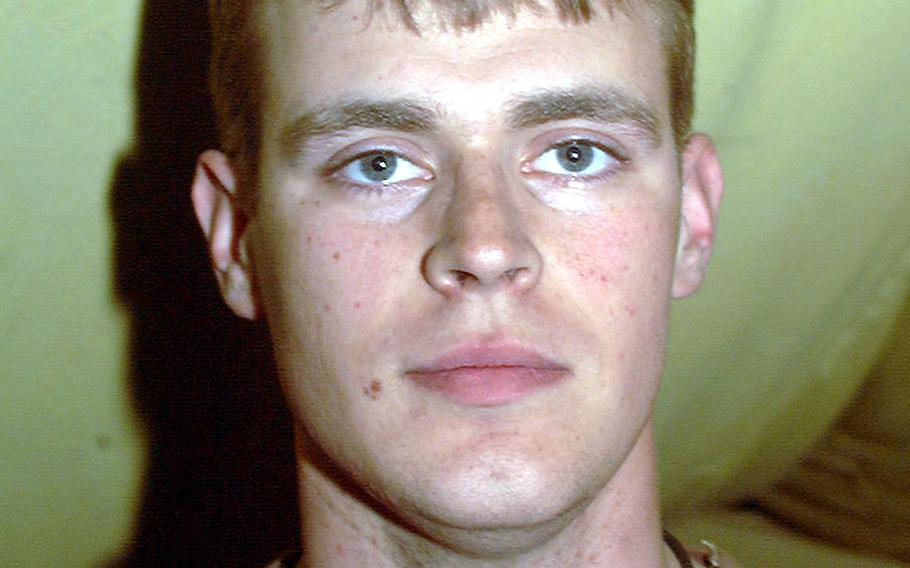 BASHUR AIRFIELD, Iraq &#8212; His gear at his feet, U.S. Army Pfc. David Foley stood stoically on the concrete airfield ramp waiting for a lift out of Iraq.

It was dusk Saturday, and in less than an hour, a C-17 aircraft would land to take Foley a step closer to his parent&#8217;s home in western Tennessee. He looked tired. He felt numb.

On Friday, at the airfield in Kirkuk, a sergeant major, his unit&#8217;s first sergeant and another soldier approached the Bradley mechanic from Vilseck, Germany, and summoned him into a room, away from the others.

Instead, an Army chaplain walked in.

A moment later he was sitting in a chair, trying to contemplate the death of his older brother, his only sibling.

Foley said he introduced Thomas to his future wife, Paulette. Last fall, the couple was blessed with their first child, a son they named Logan.

Foley took the tragic news like a soldier. The Army is a hardened group. It has to be, in most cases.

Senior members of Task Force 1-63 Armor, an immediate ready force based in Vilseck and the unit Foley is attached to, made it a priority Saturday to get him to Bashur airfield.

The Air Force&#8217;s 86th Expeditionary Contingency Response Group, which controls the base, got Foley a seat on the next plane bound for Germany. From there, it&#8217;s a plane ride away from the United States.

The younger Foley never intended to make the military a career.

His brother, on the other hand, had spent nearly four years in uniform, and had raised his right hand for three more. Thomas Foley was a mechanic, too, but he also operated a Humvee equipped with a turret to fire Stinger missiles.

Marrying Paulette was the best of all, especially since they didn&#8217;t hit it off right away, according to their matchmaker.

Meeting Paulette changed his life, and his attitude.

The brothers were close in many ways. They were born a year and 17 days apart. The last time they spoke to each other was by phone on March 20, two days after David turned 22.

Asked what enduring memories he has of his brother, Foley laughed as only a kid brother could. They fought often growing up. Many brothers do.

But they always &#8212; always &#8212; made up on the spot, and then would head for the neighborhood park to shoot hoops, or into the house to play video games.

Their stepfather, Brian Darden, is a veteran of the 1991 Persian Gulf War. He and their mother are proud of the boys. Now they have to bury one of them.

Death had tapped Foley on the shoulder about a week before he deployed, when an older soldier &#8212; a mentor &#8212; was killed in a car accident in Germany. Now his only brother is gone.

Kevin Doughterty is embedded with the Air Force at Bashur airfield in northern Iraq.