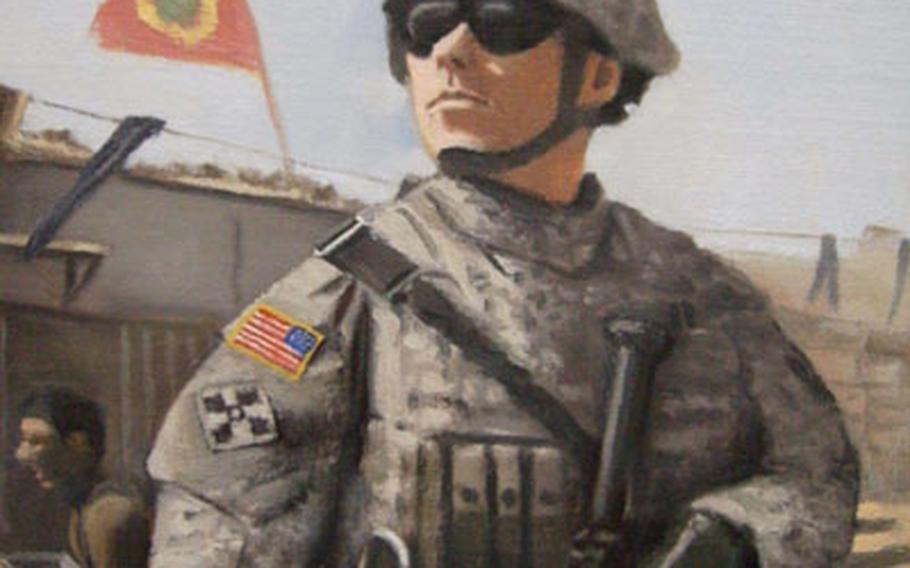 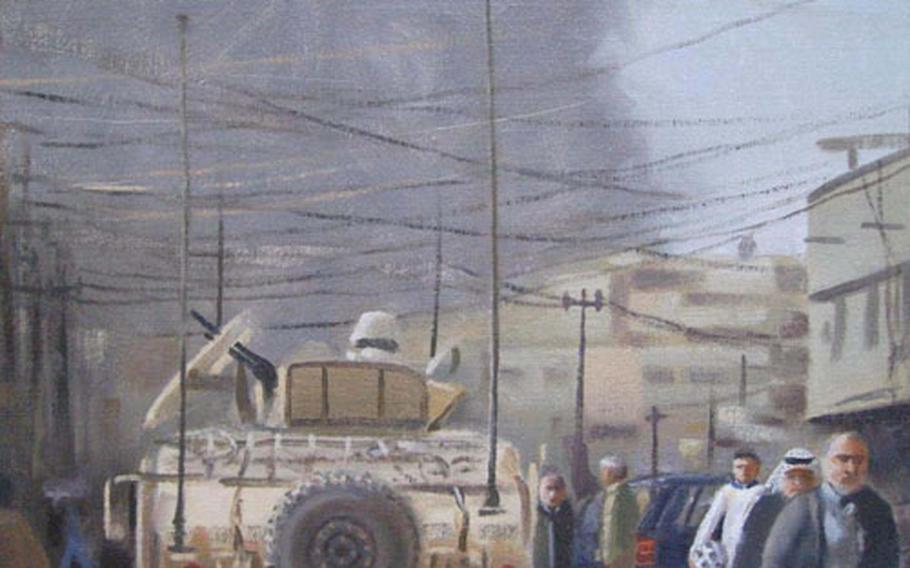 This painting captures the moment after an explosion in eastern Baghdad earlier this year. (Photo courtesy of John Lenaghan)

However, Lenaghan, 31, a husband and father to two young girls, fills his downtime in Iraq with a productive and meditative hobby: painting. The soldier has painted several portraits depicting soldier life in Iraq.

It all began when his wife, Molly, encouraged him to go to art school, years before he joined the Army, when others close to him viewed it as a folly, he said.

Lenaghan attended a now-defunct art school for two years, where he trained in oil-based paintings. He then taught oil painting at the school for three years.

His paintings from Iraq depict both U.S. soldier and Iraqi civilian life and the complexity that comes from the coexistence of those worlds.

He paints from pictures taken by his fellow soldiers while out on patrol and from his own collection of photos from missions in Baghdad.

One painting captures a moment after an explosion in eastern Baghdad earlier this year. It shows the criss-crossing electrical wires that dangle over so many of Iraq&#8217;s streets, with billowing smoke from the explosion in the background as troops in Humvees stand sentry and Iraqi passersby go about their daily lives.

Another painting shows a calm setting with Iraqis herding sheep with a Bradley fighting vehicle in the background. The portrayal shows, again, how Iraqis carry on while war persists in their backyards, Lenaghan said.

But he also does still life and sketches not based on photos.

Lenaghan said his art school instruction was difficult &#8212; &#8220;much harder than the Army.&#8221; Students followed orders from the instructors or left the school.

During his first year he was allowed to use only four colors: black, white, red and green. He said he learned many life lessons that have helped him with his family and being a soldier in a war zone.

Lenaghan&#8217;s unit, a part of the 1st Cavalry Division, operates in one of the most restive corners of Baghdad, directly adjacent to Sadr City.

He and his unit have roughly four months left on their deployment to Iraq. As for Lenaghan, he has 18 months left in the Army and has opted to leave at the urging of his wife and daughters.