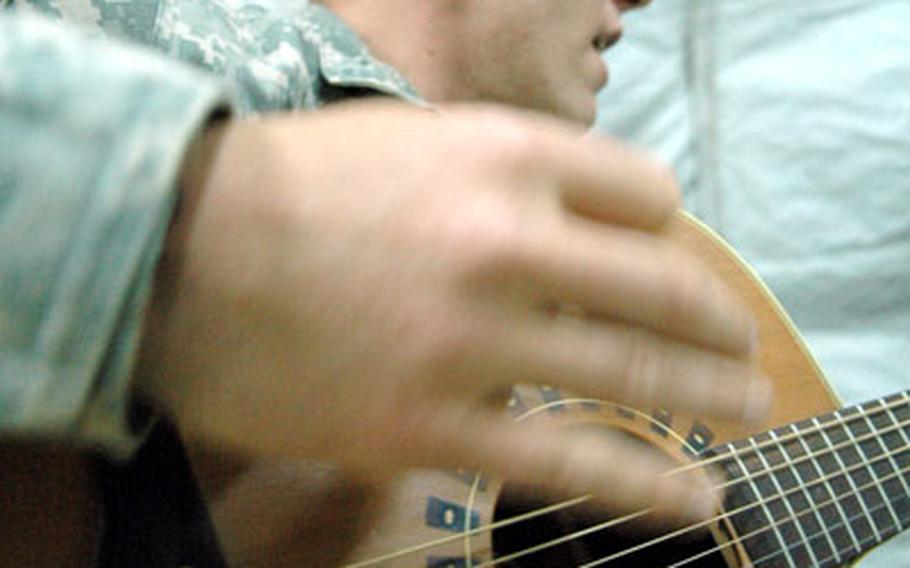 Joshua Revak, singer of “The Bandit Song,” practices his guitar and vocals while he was deployed to Camp Nimur in northwest Iraq earlier in the year. Revak, who has recorded numerous songs about fallen comrades and life in Iraq, said he has lost inspiration to sing and play after the death of his mentor, 1st Sgt. Aaron Jagger. (Monte Morin / S&S)

FRIEDBERG, Germany &#8212; After watching his roommate get blown up by a mortar and losing two close friends in another attack 44 days later, Pfc. Joshua Revak is at a profound low.

It doesn&#8217;t help that he credits one of those friends with rescuing him.

The friend helped him out about a year and a half ago, when Revak, with the 1st Battalion, 37th Armor Regiment, 1st Brigade Combat Team, 1st Armored Division, was in more kinds of trouble than he knew.

He compared joining the Army to buying a car you can&#8217;t test drive.

He&#8217;d gotten in trouble a couple times and lost rank. He drowned his sorrows in alcohol.

Friends still tease him about the day he got caught sleeping at attention.

Then a guitar lesson changed everything.

Revak, from Duluth, Minn., was at his happiest playing guitar, and wanted to get better.

That&#8217;s how he met 1st Sgt. Aaron Jagger, the battalion&#8217;s &#8220;Cobra&#8221; Company first sergeant and a fantastic guitar player. Jagger agreed to teach Revak guitar for $20 a lesson. He saw Revak&#8217;s potential both as a musician and a soldier. He also saw the young soldier as a disaster waiting to happen.

Even though they weren&#8217;t in the same unit, Jagger&#8217;s offer clearly broke the Army&#8217;s fraternization rules. Both men knew what breaking those rules meant. They had an idea of what would happen if they didn&#8217;t.

Revak thought passing up Jagger&#8217;s offer would be akin to suicide.

He moved in with Jagger, his wife and his three youngest daughters. Two older daughters were already out of the house. The whole family welcomed the addition.

It was at this point that Revak started to love the Army.

For the next 11 months, until the 1st Battalion, 37th Armor Regiment &#8220;Bandits&#8221; deployed to Iraq, Revak lived in secret in an upstairs room that had been Jagger&#8217;s music room. Jagger became Revak&#8217;s surrogate father and one of his closest friends. Even though they spent a lot of time together, nobody outside the house knew they were so close, Revak said.

&#8220;We played a lot of music for church and everything else. He was my teacher, and I followed him everywhere I could,&#8221; Revak said.

Revak met his wife, Marta, while living with the Jaggers. And after their first date, Revak brought Marta home to meet the Jaggers as if they were his own family. They were the first to meet her.

Before deploying, Revak and Jagger gained fame among the Bandits by recording a rock version of the unit song, which is played before daily battle updates in Iraq and leads off battalion functions.

But in Iraq, the two became better known for the original songs they wrote for fallen comrades. They regularly performed at memorial ceremonies for soldiers and Marines who died there.

Revak&#8217;s days of playing memorial ceremonies in Iraq ended halfway through his second Iraq tour. Revak was injured in late June when a 120-mm mortar fell just feet away from where he was standing in Ramadi, Iraq. His roommate in Iraq, Sgt. Terry Lisk, took the brunt of the blast and died within minutes. Revak was medically evacuated to Germany.

Jagger was distraught over Revak&#8217;s injury, which smashed bones in his right foot and ankle and clipped part of the Achilles tendon in his left. Jagger had his wife, Sandie, bring the bedridden soldier Jagger&#8217;s own guitar.

A bit more than a month later, Jagger and two other soldiers, including Revak&#8217;s close friend Spc. Shane Woods, were killed by a roadside bomb in Ramadi.

The deaths of Jagger and Woods devastated Revak, who now considers writing and playing songs for troops&#8217; memorial ceremonies a part of his life he won&#8217;t go back to.

For days after Jagger and Woods died, Revak forgot about his shattered right foot, encased in a black cast with the Bandits&#8217; trademark skull logo. He didn&#8217;t know whether to sit or stand. He was furious, but didn&#8217;t have anything at which to direct his anger.

Mourning with Sandie really helped him get past that, he said. He visited Jagger&#8217;s family a couple times &#8220;and just grieved, and talked and told stories about the funny things that he did. He did some off-the-wall stuff,&#8221; Revak said.

Of all the off-the-wall stuff, moving a private into his home might have taken the cake. But Revak is sure his life is better for what Jagger did for him.