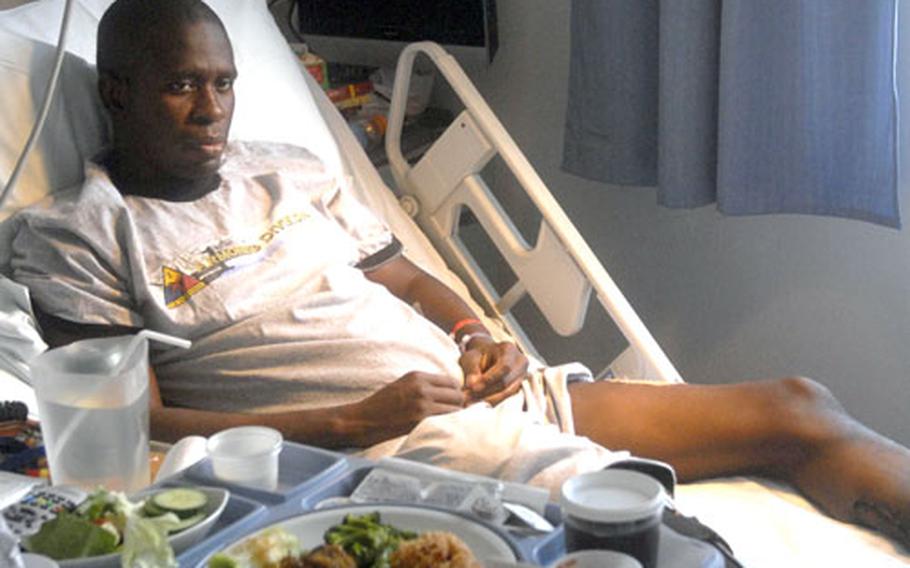 Pfc. Derraivius Strawder was injured June 23 in Iraq as a disgruntled sheik opened fire on a group of soldiers as they were leaving a weekly council meeting in Salman Pak. Two soldiers in Strawder’s unit were killed and two others were wounded. (Steve Mraz / S&S)

LANDSTUHL, Germany &#8212; Pfc. Derraivius Strawder remembers having a lot of anger, a lot of rage.

Those were his emotions around noon on June 23 when a former Iraqi council member leveled an AK-47 and unexpectedly opened fire on U.S. soldiers as they left a meeting in Salman Pak, Iraq.

"I heard the first shots," Strawder said Thursday while recovering at Landstuhl Regional Medical Center. "I was about to turn, and then my legs went out from under me."

The Iraqi shot Strawder in the left calf and right thigh following a council meeting with local leaders.

The gunman sprayed AK-47 rounds at Strawder and fellow Baumholder soldiers with the 2nd Battalion, 6th Infantry Regiment as the soldiers made their way toward their vehicles.

"I think the initial time it was just get &#8217;em down, so he just sprayed and sprayed," Strawder said. "After that, he was going to go around and finish everybody off. That&#8217;s what it looked like he was trying to do."

Also wounded in the attack were Pfc. Thomas Williams, Cpl. Joseph Browning, and a civilian interpreter. Capt. Gregory Dalessio and Pfc. Bryan Thomas were killed in the attack.

Strawder and Thomas were pulling security on the roof while the weekly meeting took place. When 2-6 commander Lt. Col. Michael Shrout left the meeting, Strawder and Thomas &#8212; serving on Shrout&#8217;s personal security detachment &#8212; came down from the roof, established a perimeter around the commander and walked to their vehicles. An Iraqi gate guard approached Shrout to ask him a question and immediately thereafter the former council member, who apparently became upset in the meeting, opened fire at the soldiers, Strawder said.

Because AK-47s are commonly carried by Iraqi men, the man&#8217;s weapon did not raise suspicion among the soldiers, Strawder said. Strawder said he had even talked to the man at previous meetings and said he seemed like a pretty nice guy.

"He was right there, and he just opened fire," said Strawder, 27, of Albany, Ga. "He just quickly dropped everyone. Since he was so close, it was easy for him to just spray and at least knock everybody down."

Despite his gunshot wounds and a shattered right femur, Strawder pulled himself over to Thomas. Strawder saw the gunman making his way toward Dalessio so he opened fire. At that time, U.S. soldiers manning turret machine guns on a nearby Humvee and an MRAP fired at the gunman, taking him out.

The U.S. and Iraqi army soldiers helped move the wounded to vehicles, which took them back to their combat outpost. Less than 30 minutes from the time the gunman attacked, a medical evacuation helicopter flew the wounded from the outpost to the next level of care.

Strawder faces about a year of physical therapy and is now able to walk with the use of crutches. His mother and brother are at Landstuhl visiting but leave this weekend. Since the attack, Strawder has talked to his fellow soldiers back in Iraq. He said it&#8217;s good to hear from them.